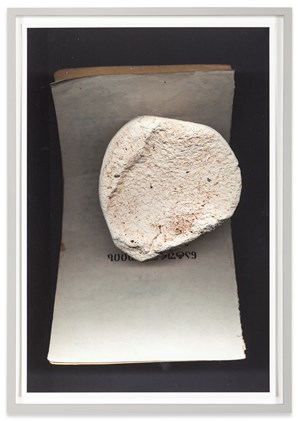 The work of Thea Djordjadze concerns itself, first and foremost, with the poetics and particularities of space. She combines a variety of artistic, industrial, and unconventional materials to produce works full of contrasts and complexity, which she puts into conversation with the architecture and atmosphere of her exhibition spaces through intimate, considered arrangements. Each of her projects is thus ephemeral in nature, open to future reconfiguration. Monika Sprüth and Philomene Magers are pleased to present the first solo exhibition of Djordjadze’s work in Los Angeles, if I were an early person, which extends the artist’s investigations into the ways in which context affects the viewing, understanding and experience of art.

The core of the exhibition comprises a series of sleek steel vitrines, fronted with Plexiglas panes, which the artist originally designed for her 2017 project at the graphic arts collection of the Pinakothek der Moderne, Munich. Djordjadze spent months familiarising herself with the museum’s large collection of works on paper from the second half of the twentieth century, focusing on those related to Minimalism, and she devised a network of steel structures that would offer a fresh, suitable home to artworks by, among others, Hanne Darboven, Sol LeWitt, Donald Judd, and Rosemarie Trockel. Modular in appearance—some standing upright, others lower to the ground—the vitrines have magnetised shelves that allow for an ever-evolving rotation of artworks to be placed in conversation with each other. The Plexigas sheets, while providing a safe haven, also generate layers of reflections that merge with what lies inside the vitrines and set up a dynamic interplay between solidity and transparency.

In Los Angeles, the vitrines are now presented anew, shifting from container to content, and highlighting the minimalist thrust of Djordjadze’s own practice. Here, they house groupings of recent prints on paper and metal that capture the scanned traces of an array of objects. Representations of the artist’s ceramics and sculptures, perfume bottles, a curving candle, a vase, and other substances seem to emerge from darkened backgrounds, at once ghostly and corporeal, and link back to Djordjadze’s past works that have incorporated common materials that carry traces of the human body. These works share space with photographs of an artist’s studio, scanned and reprinted such that the image begins to disintegrate. From earthy colours to rich, saturated hues, the prints form a compendium of images and evocative surfaces that encourage us to move through the gallery space, spending time looking at and decoding them in an effort to unlock their meaning.

Throughout her installations, which always take their final shape in situ through a process of careful deliberation, Djordjadze remains attuned to the details of the architectures that contain them. The grids that appear in certain prints, and in the repeating structure of the vitrines themselves, echo the late modernist high rise that houses Sprüth Magers, Los Angeles. One vitrine unit stands alone, flanked by panes of Plexiglas propped against the wall, as if the installation might be rearranged at any minute. At the opposite end of the gallery, an untitled sculpture in a brilliant shade of red powder-coated steel seems to hover just above the ground; it brings our attention first to the space’s perimeter, and then to a nearly hidden pocket of the space. There, we encounter another vitrine, with a gently crushed print on copper replicating an image that appears elsewhere in the exhibition, as if it were a recurring memory. Djordjadze has choreographed each structure, object, and element so as to foster these subtle spatial encounters, which will only exist in this configuration and context for this moment in time.

IF I WERE AN EARLY PERSON

Sign up to be among the first to know when new exhibitions by Thea Djordjadze or at Sprüth Magers open.