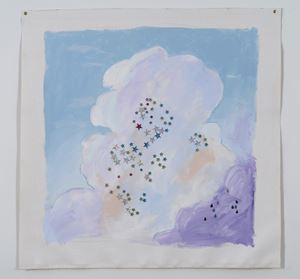 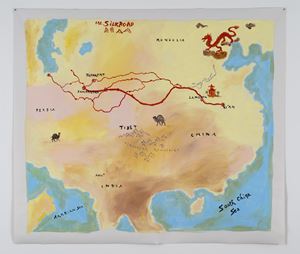 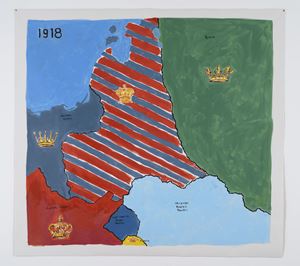 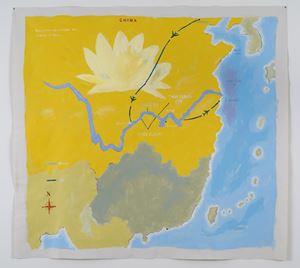 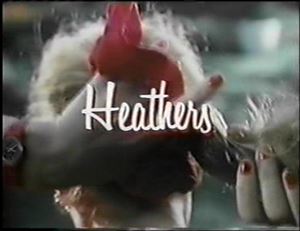 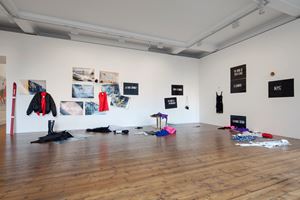 One of the most important representatives of figurative painting, sculpture, video and installation in the last four decades, Karen Kilimnik continues to produce work that is as diverse as it is groundbreaking. The artist brings together historical cultural references—including ballet, the aristocracy, 14th to 18th-century painting, Romanticism, and the Second World War—with the spheres of books, music, film and television. Her scenes, characters, and symbols are recognisable to many from the realms of art and world history, fairy tales, or the pages of magazines, yet they are rendered surreal and often unnerving through the artist's deft manipulations of both content and material. Remarkably, Kilimnik's presentation at Sprüth Magers, Los Angeles, is the artist's first solo exhibition in Los Angeles, and includes recent paintings and sculptures, alongside videos and sculptural work stretching back to the 1990s.

Kilimnik's recent map paintings feature a varying array of colour fields, borderlines, dates, place names and notations that sometimes pinpoint a particular moment and location, but can also be seen as abstraction. They largely centre on Europe, the Near East and China, some with dates that clearly reference history (including, prominently, the Second World War), but others in which borders take a backstage to the much frothier delineations of cruise lines, trade routes, mascots and crowns. At once ruminations on painting and on the concepts of culture, geology, history, exploration and adventure, the map paintings remain ambivalent representations of place and time, inviting varying layers of weighty interpretation and blithe fantasy. Kilimnik has also produced a new series of cloud paintings that carry forward the multiplicities embedded within her imagery: billowing, bedazzled tufts of cloud intimate beauty and serenity, while darker, more saturated passages in other canvases suggest clouds of industrial smoke. Inspired originally by cloud formations and fires dramatically depicted in 18th-century paintings, like the maps, they offer a means of picturing the Earth's landscapes and atmospheric features.

Kilimnik's new sculptures, meanwhile, also play on our ingrained notions of culture and location: miniature puzzles of the 'World's Great Architectures' manufactured by CubicFun, including the Eiffel Tower, the Ishtar Gate, a Chinese Pavilion, and the Hermitage, are encrusted with glittering costume jewels and crystals, some Swarovski. In light of the artist's past reflections on ballet, theatre and opulence, the sculptures have the look of stage sets for tiny actors and dancers, or playthings from an aristocratic milieu. Kilimnik makes visible our innate human urge to romanticise the past.

Two environments from the 1990s illustrate the breadth of Kilimnik's approach to sculpture, as well as her early, inventive use of space and stage setting. Part of a group of works based on the popular 1960s British television series The Avengers, Kilimnik's The Joker Episode of the Avengers (1991) re-presents one of the show's particularly surreal and tense episodes. Mrs. Peel (played famously by actress Diana Rigg) is lured to a bridge champion's home, only to find he is an evil mastermind she had helped to capture, and who now enacts his revenge by putting her through a series of deadly trials and tricks. Each facet of Kilimnik's sculptural environment—giant playing cards, cut-up images of Emma Peel, packs of Pall Mall cigarettes, dozens of strewn silk and paper roses, and a soundtrack edited from the episode and its signature song, 'Mein Liebling, Mein Rose'—reflects not only specific elements taken directly from the narrative, but also alludes to the style of the sixties and our nostalgic impressions of that era. Immersive and playful, The Joker Episode of the Avengers lushly demonstrates Kilimnik's evocative manipulation of space and sound, as well as her admiration for the work of Rigg, actor Patrick Macnee, and screenwriter and producer Brian Clemens.

Taking a far sparer tack, Helter Skelter (1992) stems from the artist's fascination with the Manson Family and references the murders perpetrated in the summer of 1969 by Charles Manson's disciples, most (though not all) of them young women intent on rebelling against the establishment. The artist achieves dramatic effect using simple means and imagery: red scrawled messages on the wall, which replicate those left by the Manson Family, a beaded necklace and a turkey fork like the one used in the killings. In the context of the artist's celebrated portraits of young women, real and imagined, historical and contemporary (a selection of which are on view in the exhibition), Helter Skelter calls to mind the strains and strictures placed upon girls through time, as well as the desperate drive to feel a sense of community and belonging. The exhibition also includes Kilimnik's Paris is Burning (1991) / Is Paris Burning? (1944) (1992), which brings together clothing, photographs, and objects referencing two films: the 1966 Hollywood movie about Hitler's plans to destroy Paris in 1944, and Jennie Livingstone's celebrated 1990 documentary charting the thriving ball culture within African American, Latinx, gay, and transgender communities in New York.

Finally, a grouping of past and recent films completes the exhibition's presentation of Kilimnik's work from the 1990s to today. Included are iconic works from Kilimnik's video practice—Heathers (1994), the artist's six-hour-long re-editing of the Winona Ryder cult classic, with jumps forward and backward between the narrative and credits—as well as lesser known videos, such as introducing...Tabitha! (1991/2011), in which we encounter the screen test of the artist's fluffy black cat, with a fleeting glimpse of her tail. Tabitha, in the American sixties television series Bewitched, is the name of the daughter of Samantha, a suburban witch; the work thus calls to mind stereotypes of women and felines as engaged in witchcraft, just as it does the obsession with adorable cats in the age of the Internet. Her latest film, The World at War (2018), through scenes selected from twentieth and twenty-first-century century films, pays tribute to classic World War II movies and their world of pomp, ingenuity, camaraderie and bravery, with a particular focus on the music that ties everything and everyone together.

Replete with double meanings—innocence and cynicism, fantasy and reality, the everyday and infamy, the beauty of the Earth and the destruction of its environment—Kilimnik's work continues to shed light on the components that have formed cultural identity through the ages. In her hands, the structuring factors of culture are shown to be myriad and unexpected: from regional borders, to history, architecture, mythology, witchcraft, stagecraft, the big screen and the small screen. The view of the world that she observes and presents remains both coolly familiar and entranced with beauty and perfection.

Sign up to be among the first to know when new exhibitions by Karen Kilimnik or at Sprüth Magers open.
Sign Up