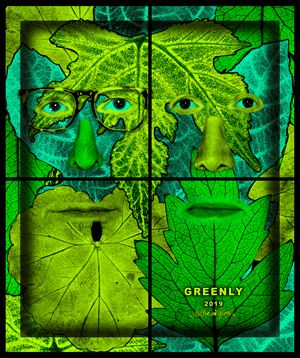 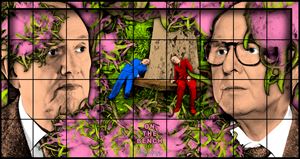 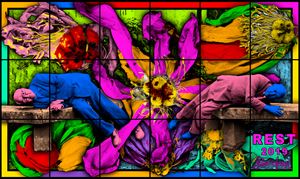 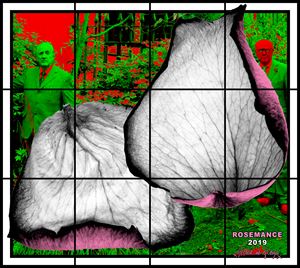 Gilbert & George have created art together as one visionary, artistic entity since 1967, when they met at Saint Martins School of Art in London. Recognised by institutions and collections worldwide for their groundbreaking, fiercely independent and influential art across diverse mediums, they continue to produce confrontational, richly emotive and thought-provoking art that, more than fifty years later, pushes into ever-new territory. Sprüth Magers is honoured to début Gilbert & George’s PARADISICAL PICTURES, a new group of thirty-five major pictures that mark the artists’ first solo exhibition in Los Angeles in nearly two decades.

In the late 1960s and early 1970s, Gilbert & George conceived an approach to art-making that explored modern morality, human frailty, the city and the natural world through commonplace yet intensely emotional imagery—an ART FOR ALL, in their terms, that could resonate with people from all walks of life. Under cover of their deceptively straightforward visual language, they have tackled critical, provocative subjects that tap into the deepest drives of contemporary society, particularly centred on urban life, including hope, fear, sex, religion, corruption, violence, racial tension, patriotism, addiction and death.

Amid these intense topics, complexity and empathy are ever-present, as are the artists themselves. At the start of their career, Gilbert & George declared that they were Living Sculptures, artworks in their own right, and images of their suited, respectable-looking persona have circulated through their art ever since. Though their guise is one of a conservative pair of modern citizens, paradoxically, the messages in their art strive for openness, inclusivity and the freedom to express oneself as one chooses. The art of Gilbert & George has always comprised a 'love letter,' in their words, to a multi-cultural, multi-faith, mass-technological, sexually open, volatile, moral, mundane and fantastical modern world. Their pictures open the viewer to self-examination and to a renewed questioning of their place in the world.

Gilbert & George appear across the many panels of the PARADISICAL PICTURES, meandering through a violently vivid array of psychedelically coloured natural forms, including flowers, leaves, petals, fruits, tree limbs and branches. Individually, each picture presents a mesmeric world unto itself, replete with lush surfaces and vibrant hues, but likewise filled with references to aging and exhaustion. Together, they comprise an overwhelming, compelling yet ambivalent concept of paradise: gorgeous, abundant and attractive, yet elsewhere resolutely nightmarish. As the critic Michael Bracewell writes in the exhibition’s catalogue, the PARADISICAL PICTURES present 'a world in which atmosphere doubles as event—a quality shared with the films of Alfred Hitchcock or early animated films by Walt Disney studios. Their heightened, saturated, violent, cloying colours convey hallucinogenic portent, unease—like musty-sweet sleeping gas.'

In certain pictures, Gilbert & George seem to merge symbiotically with the natural world. In GREENLY, their disembodied eyes, noses, and mouths emerge, ghost-like, from layers of pressed leaves. Looking directly outward, but not quite catching the viewer’s eye, they appear entranced as they meld with the fields of mint and acid green that surround them. In other pictures the environs engulf the artists, threatening to overtake their tired bodies. The desiccated stamen and petals in REST take on insectile properties, reaching toward the artists as they lie uncomfortably on thick wooden benches. Hardly a typical scene of rest and relaxation, the dried plants’ enlarged scale and grasping tendrils look like something out of a horror movie, while the chromatic display of deep reds and oranges, bright yellows and greens, and electric blues, purples and pinks add an incongruous rainbow of optimism to the fraught scene.

Throughout these pictures, and in Gilbert & George’s art in general, references emanate from disparate eras of cultural history, including nineteenth-century Romanticism and the pop milieu of science fiction and comic books. In ON THE BENCH, giant portraits of the pair flank the edges of the composition, mimicking sentimental picture-making of the nineteenth and early twentieth centuries, or even the coupled aristocratic portraits of earlier painting traditions. Toward the centre, that regality is countered by smaller-scale representations of the artists slumped over on a park bench, passed out perhaps from fatigue or drunkenness. Frequently the butt of their own jokes, the artists repeatedly portray their persona in a laughable light, negating the myth of artistic genius and presenting themselves as fallible seekers of knowledge. Their droll dance moves in DATE DANCE illustrate this self-mocking tone, while the dried dates that join them in motion recall the scatological auras of the artists’ challenging NAKED SHIT PICTURES of the mid-1990s. No object is necessarily as it seems in the PARADISICAL PICTURES’ strange, mind-altering vistas.

Though the specific imagery in Gilbert & George’s art stems largely from the areas around their studio in London’s East End, the context of Southern California—deeply political and attuned to contemporary social issues—is an engaging one for their PARADISICAL PICTURES in particular. The hallucinogenic palette and focus on natural forms such as leaves, fruits, and flowers, for example, aligns productively with California’s history as an important breeding ground for the bohemian, environmentalist and civil rights movements from the 1960s onward; and the cinematic nature of Gilbert & George’s pictures, which flow from one to the next, building an uncertain tale of paradise, calls to mind the dream-worlds, characters and impulses of the Hollywood film industry. As the artists move through these dense and richly coloured vistas, they carry the viewer with them on their allegorical journey to another, and possibly higher, plane of existence.

Sign up to be among the first to know when new exhibitions by Gilbert & George or at Sprüth Magers open.
Sign Up