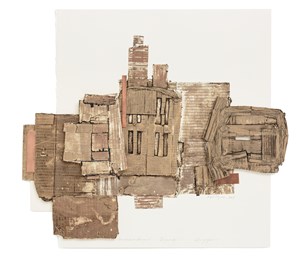 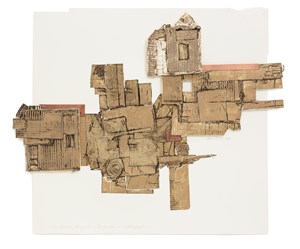 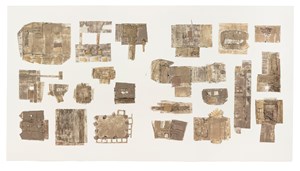 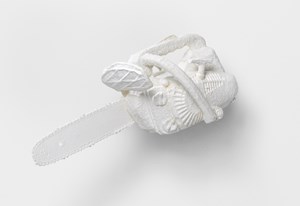 Of Fragments and Impressions is a ground-breaking exhibition staged by STPI and award-winning Brisbane- and Manila-based installation artist duo Alfredo and Isabel Aquilizan in conjunction with STPI's 15th anniversary. Impressive in scale and pivotal in its undertaking, the extensive oeuvres seethe prolific artists breaking new frontiers by transforming fragments of their widely-acclaimed temporal installations into permanent material works for the very first time. From a sweeping installation of cardboard pulp and steel metal rods, to gritty shanty town houses constructed with compressed cardboard, to spectacular large-scale cyanotype collages of wings, the artists turned the STPI gallery into a stellar showcase which embodies their decades-long practice.

Fragments after In-Habit, a new series of collagraphs, reuses squashed cardboard from a 2012 collaborative artwork which toured around Australia for three years and travelled to Japan, where visitors created cardboard dwellings that were assembled onto the original work. The sickle and slippers motifs in their Left Wing and Wings series extend from significant ephemeral works such as Belok Kiri Jalan Terus (2015) and Wings (2009), which reflect the complex social realities facing agrarian communities and draw reference to countries with leftist political histories. Lastly, the Northwind series follow the trajectory of the artists' early works in the late 90s, demonstrating the universal longing of homesickness and separation.

A milestone achievement, these outstanding works chronicle the artists' personal history and are triumphant testaments to their artistic breadth.

Of Fragments and Impressions 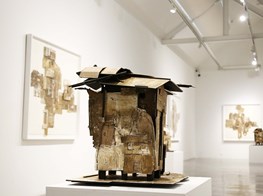 Brisbane- and Manila-based artist couple, Alfredo and Isabel Aquilizan, have travelled to many parts of the world. The installation artists often work closely with the communities they enter, creating site-specific artworks that explore themes of home, longing and loss. "It is always a collective effort," says Isabel Aquilizan. As their...

Sign up to be among the first to know when new exhibitions by Alfredo & Isabel Aquilizan or at STPI - Creative Workshop & Gallery open.