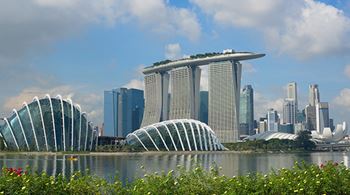 Other than its rolling exhibitions, a number of popular arts events take place at Gillman Barracks throughout the year, including Art After Dark—a biannual open house event that sees pop-ups, performances, and live music accompany late-night exhibitions at the galleries. In 2019, the January edition of Art After Dark overlapped with the inaugural S.E.A. Focus—a showcase of Southeast modern and contemporary art by a selection of international and local galleries, hosted by STPI.

Established in 2002, STPI is located on the banks of the Singapore River, comprising a 400-square-metre gallery space, with workshops that support artistic projects in the mediums of print and paper. A non-profit organisation, STPI collaborates with artists from around the world, including Carsten Höller, Alfredo & Isabel Aquilizan, Ashley Bickerton, Aaron Curry, Sam Durant, and Heri Dono, to name but a few. STPI also runs a regular schedule of public programmes, including screenings, talks, and tours.

Beyond Gillman Barracks, other galleries in Singapore include Gajah Gallery, which is situated in a large industrial space in Tanjong Pagar—an historic district where visitors can find Maxwell Food Centre, home to the famed Tian Tian Hainanese Chicken Rice. Established in 1996, Gajah Gallery has held an important position in the development of the Southeast Asian arts scene, supporting artists from across the region such as Yunizar, Erizal As, and Handiwirman Saputra. The gallery also has a space in Yogyakarta, a dynamic arts hub of Indonesia.

Independent arts spaces in the city include Grey Projects and The Substation. The former is located in the bustling neighbourhood district of Tiong Bahru—one of Singapore's oldest public housing estates, known for its distinctive, white architecture. Focusing on design, writing, and curatorial research, this multidisciplinary project space hosts exhibitions by local and international artists, and conducts regular reading groups, talks, and residencies, many of which are conducted as exchanges with residency partners including Taipei Artist Village in Taiwan, Akiyoshidai International Art Village in Japan, and the National Museum of Modern and Contemporary Art in Korea.

The Substation is one of Singapore's more subversive arts spaces, supporting experimental arts practices since its founding in 1990 by the late playwright Kuo Pao Kun. Each year, an overarching theme informs The Substation's programming. In past years, themes have included 'Cities change. People die. Everything you know goes away.​' (June 2018–April 2019)—'an exploration of ​how​ and ​why​ heritage is a political and emotional topic for the public.' The programming according to these themes is eclectic, from theatre to panels and exhibitions across The Substation's multi-use venue.

Ten minutes' walk away from The Substation is the National Gallery Singapore—the city's foremost arts institution, built in the former City Hall and Supreme Court. Opened in 2015, the Gallery holds the world's largest public collection of Singaporean and Southeast Asian modern art, some of which is visible across the 64,000-square-metre venue in exhibitions such as Between Declarations and Dreams: Art of Southeast Asia since the 19th Century, an impressive historical overview of the art history of Southeast Asia, containing over 300 artworks. Large-scale international exhibitions include Minimalism: Space. Light. Object. in 2019—an ambitious survey of Minimalism and its legacy in the 20th and 21st centuries across the globe.

View From This Side