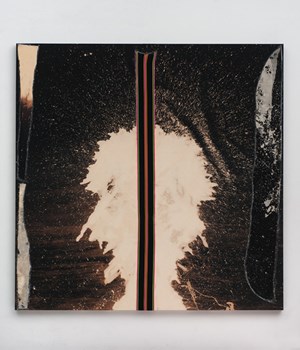 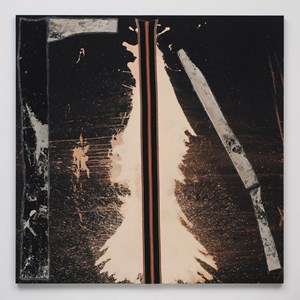 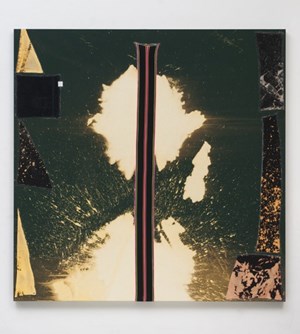 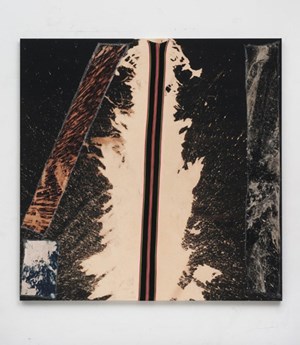 Sterling RubyBC (4997)Fabric, glue and bleached canvas on panel
84 x 84 x 2 inches
Sold Taka Ishii Gallery
View More Works By This Artist
Taka Ishii Gallery is pleased to present BC RIPS, a solo exhibition of the Los Angeles-based artist Sterling Ruby. For his second exhibition at Taka Ishii Gallery, Ruby will present a set of large-scale collage paintings that derive their pop-like, formal patterning from the craft of quilt making. Indeed, they call to mind the utilitarian works of the quilters from Gee’s Bend in Alabama, as well as the worn denim of Japanese Boro textiles.

Using a process similar to creating a Rorschach inkblot, Ruby pours and splatters bleach onto the fold of fabric panels, making negative patterns that resemble explosions or nebulas radiating from the center. In addition, a playful band, or “rip,” of brightly colored fabric bisects each of these works. Ruby has cited Andy Warhol’s symmetrical Rorschach paintings, as well as Barnett Newman’s “zips,” as influences. In the BC series of works, bleach splattered remnants and fragments of cloth are affixed to their surfaces with copious amounts of glue that still seep from their edges. These beautifully formal paintings vibrate with a meditative energy, traversing creative and destructive forces, and presenting a kind of spatial or existential acid tripping.

Ruby’s profile as an artist on the global stage has continued to rise in the past few years since art critic Roberta Smith of the New York Times in 2008 called him “one of the most interesting artists to emerge in the twentieth century.” He uses a wide range of aesthetic strategies in his practice, from saturated, glossy, poured polyurethane sculptures, to drawings, collages, richly glazed ceramics, graffiti inspired spray paint paintings, and video. His work is a balancing act, maintaining a constant tension between a multitude of elements. His work deals with issues related to the violence and pressures within society, and art history, even as it also reflects his personal history. In all of his work, he vacillates between the fluid and static, the minimalist and expressionistic, the pristine and the defaced.

Sterling Ruby will be featured in the The Los Angeles Project at Ullens Center of Contemporary Art, Beijing (2014), the Taipei Biennial 2014 at Taipei Fine Arts Museum (2014) and the The 10th Gwangju Biennale: Burning Down the House, Gwangju (2014).

Sign up to be among the first to know when new exhibitions by Sterling Ruby or at Taka Ishii Gallery open.
Sign UpLogin