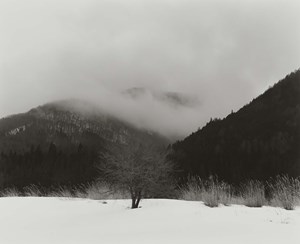 Taka Ishii Gallery Photography / Film is pleased to present An eventual saturation, a solo exhibition of works by Toshiya Murakoshi, from October 6 to November 10. The exhibition marks the artist's third solo exhibition at the gallery since his previous showing two years ago, and features a selection of approximately 18 photographic works taken between June 2014 and March 2016.

Since 2006, Murakoshi has engaged with his hometown of Fukushima as the central subject of his practice, continuing to shoot various familiar landscapes across the region. The artless act of photography as a means to 'scrape away the things and circumstances one is inherently born with in order to pursue what ultimately remains,' comes to manifest in the form of a photographic oeuvre that permeates with a certain strength.

I am kept alive by continuing to engage in photography, and am scraped away and ravaged as I dream.

This double spiral connects the various phenomena that occur in the world with the impressions that have been cultivated within my mind.

The act of taking photographs is prayer for the irreversible past, and is a starting point for articulating a new narrative.

The Great East Japan Earthquake of 2011 and the nuclear disasters that followed, had transformed the landscape of Murakoshi's hometown into an anomalous place of its own. The title of his previous solo exhibition 'A gradual thaw,' conveys the photographer's approach and sentiment in questioning the meaning for his continuing to photograph the places where scars of the disaster remain, gradually reaffirming how the act of capturing his hometown is indeed what truly constitutes photography as it is to himself. In the title of this exhibition "An eventual saturation," the exposed contents of this 'gradual thaw' spills out onto the surface of the ground, and no longer able to seep through the gaps in the terrain, eventually begins to overflow. Murakoshi's gaze that continues to observe the realities of the current while harbouring considerations towards the past, gives rise to a new expanse of narrative within the scenes of familiar local landscapes.

Toshiya Murakoshi was born in 1980 in Sukagawa, Fukushima Prefecture. He graduated from Nippon Photography Institute in 2003. Currently based in Tokyo, Murakoshi has shot his hometown since 2006 and continuously produced serene, yet powerful, landscape images that appear to trace his memories of time spent in his hometown. In 2009, he established the gallery 'TAP' in Kiyosumi-Shirakawa, Tokyo. His solo exhibitions include timelessness at Konica Minolta Plaza (Tokyo, 2008), uncertain at Shinjuku Nikon Salon (Tokyo, 2009), kusa wo fumuoto [sound of stepping on grass] at Fukushima Airport (Fukushima, 2012), and Burn After Seeing at Kichijoji Art Museum, Musashino City (Tokyo, 2014). He is the recipient of the Photographic Society of Japan Newcomer's Award (2011) and the Sagamihara Photograph New Face Incentive Award (2015). His works are included in the collections of the National Museum of Modern Art Tokyo and San Francisco Museum of Modern Art.

Sign up to be among the first to know when new exhibitions by Toshiya Murakoshi or at Taka Ishii Gallery Photography / Film open.
Sign Up
}