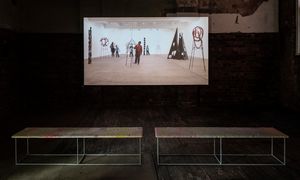 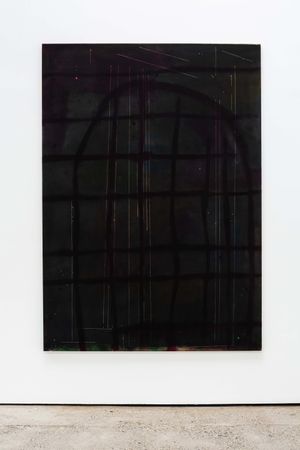 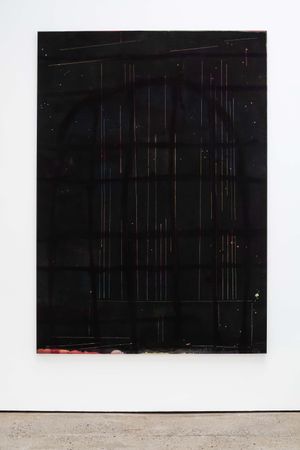 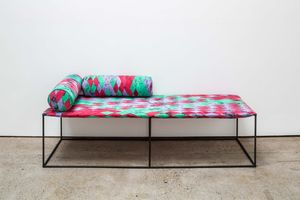 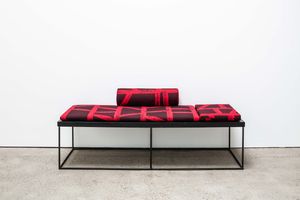 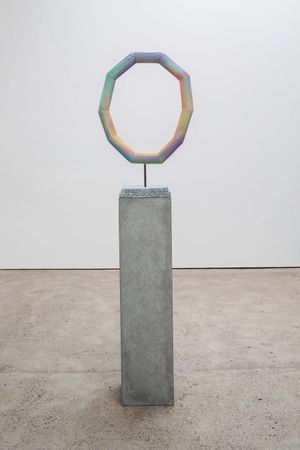 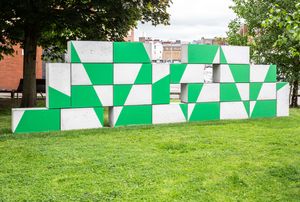 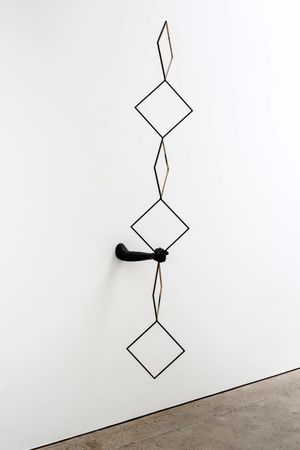 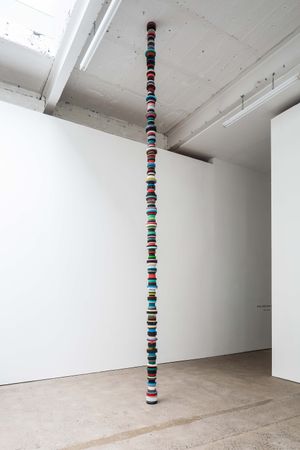 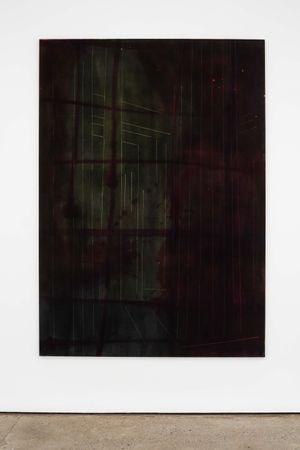 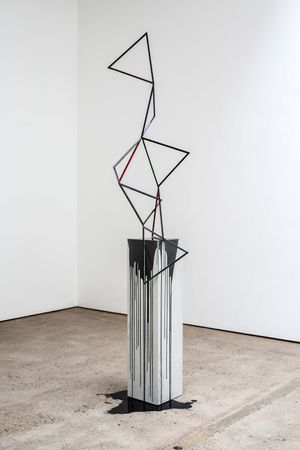 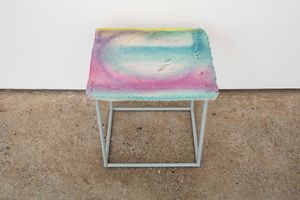 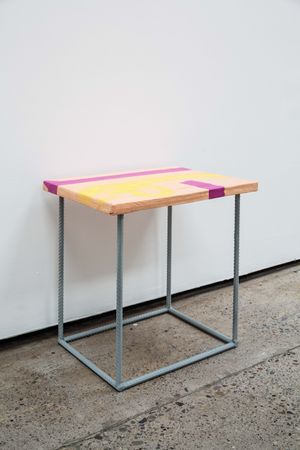 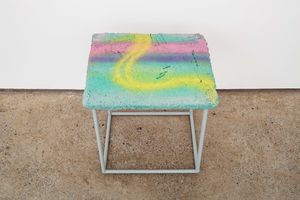 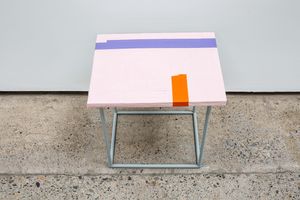 For Glasgow International 2021, The Modern Institute presents a new exhibition by Eva Rothschild at its Aird's Lane gallery, which extends the artist's interest in reinvigorating conventional sculpture. While actively engaging with the traditional materiality of sculpture, her work pays close attention to the active relationship between the viewer and the artwork. Employing multiple formats and diverse materials, and drawing on influences from minimal art of the 60's and 70's, transcendent materiality and classical architecture, Rothschild encourages visitors to experience both a physical and an aesthetic response, as they navigate their own corporeality in proximity to the work—the composition of the exhibition and the architecture—with an aim to create multiple spaces for contemplation, conversation and engagement.

The outdoor work Hazard (2018) is a cast concrete wall painted with a diagonal perspective pattern, green on one side and black on the other, visually disrupting its material presence. While operating clearly as a sculpture, the piece has echoes of the 'temporary' coercive and protective blocks that have become commonplace in our urban settings. Her interest in heightening our self-awareness in relation to the sculptural environment is likewise reflected in Technical Support (2021), the first work in the main space. Its spindly form of stacked multi-coloured cast tapes reach the ceiling proudly, as if pretending to actually fulfil a structural function.

Throughout the exhibition, sculptures are presented on concrete plinths: Eye of the Rainbow (pale) (2021), The World Wide Web (2021), and Tranquillity Now (black) (2020), call to mind influences of traditional modernist sculpture - in particular, repeating the trope of the open sculpture in which the viewer is prescribed with the choice of viewing the world through the work, or looking at the sculpture alone.

Stigmata (2020) intertwines the body and the object: a geometric form in all its objective perfection pierces this miraculously emergent form, unified through the application of an unnaturally deep black—creating a co-dependency and completeness in the totality of the sculpture while juxtaposing the organic with the constructed. Black is used throughout Rothschild's practice to create clear sculptural silhouettes to enhance the edges and limits of the works. However, the hidden materiality of the sculpture is only revealed in the glimpses of golden bronze inside the rising column. Likewise, the seemingly monochrome wall-based works of wax-resist dyed-calico, all possess subtleties which are revealed upon closer inspection—multi-coloured layers surface and recede, giving way to abstracted vistas of columns and arches.

By deliberately destabilising physical and visual characteristics in her work, Rothschild not only questions the aesthetics of art, in particular minimalism, but engages the viewer in an active relationship with the sculpture. Daybed 01 (BMS) (2019) and Daybed 02 (BMS) (2019) and Rothschild's cast stools allow us moments of rest in the space; they signal that we are welcome and give us access to the materiality of the works, making us part of the mise-en-scène created in every exhibition.

Screening in the Bricks Space is Boys and Sculpture (2012), which captures the interaction between a group of young boys in a gallery with Rothschild's works: cautious observation soon gives way to an unsatiated curiosity that ultimately descends into joyful chaos and play—reaffirming that our presence is in constant dialogue with the conversation that Rothschild's practice instigates, further emphasising the body's key role in the act of making and experiencing artworks.

Sign up to be among the first to know when new exhibitions by Eva Rothschild or at The Modern Institute open.
Sign Up