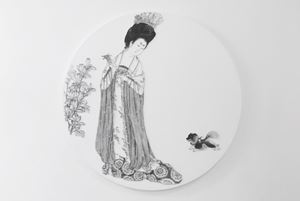 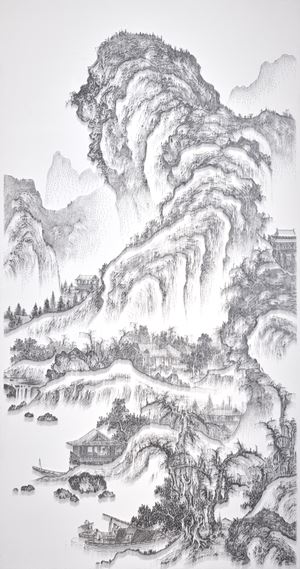 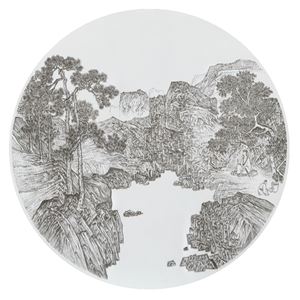 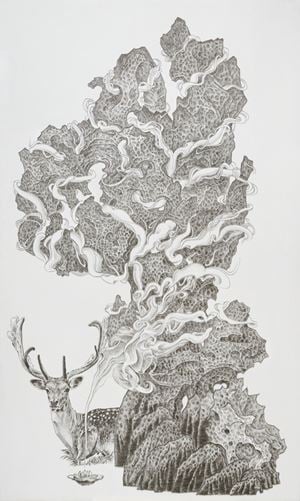 Tina Keng Gallery is pleased to present Chen Chun-Hao: Meandering Toward the Clouds. The solo exhibition showcases a series of new works featuring Chen's unique mosquito nail shanshui. Employing industrial nails as a prominent medium, Chen has developed over the years a complex dialogue between the technique of traditional ink paintings and an emphasis on materiality. On his canvas, planes are composed by an intense formation of dots and lines, capturing a vivid interplay of light and shadow that successfully translates classical ink art into a contemporary sensibility of presence and immediacy.

Meandering Toward the Clouds chronicles Chen's psychological ups and downs over the past year at a critical moment as he turned 50. As the occasion celebrates a culmination of a decade-long journey where Chen has dedicated his artistic energy to paying homage to the tradition of emulation while generating new possibilities for his now signature technique, the solo exhibition comprises his famed emulation series, as well as new works from the 'Stone Fairy' and 'Nuwa' series. This not only initiates a brand-new narrative juxtaposing time and space, but also underpins a contemporary rendition of the classical literati spirit, inherited from the legacy of traditional ink painting and the practice of calligraphy.

As tens of thousands of nails are punctured through the canvas by a nail gun, the operation presents a nuanced debate of labor in the process of artistic production. This critical discussion is made possible by Chen's use of industrial mechanics as his response to a classical Chinese aesthetics, breaking the original frameworks created by the historical works of ink art he emulated. Shadow and darkness enable a sequence of atmospheric grayscale imagery, while light travels through a thick cloud of nailheads. A dynamic picture of mountains and valleys spans across the canvas as the viewer's line of vision changes.

Chen's nail rendition of landscape is a natural reminder of the 'dotted texturisation with charred ink' technique developed by the late calligraphy master Chang Kuang-Bin. With the help of his personalised wrinkle method, Chen's unique approach further provides a sense of depth on a two-dimensional surface. As Chen reinterprets classical paintings from a wide variety of styles and schools, he on the one hand appropriates, emulates, and recreates the originals, while on the other hand produces a dramatic suspense to subvert the initial narratives of the original works, by generating new meanings with his alternative readings.

Lady Jade Temple and Nuwa Temple, both completed in 2019, stand as the stylistic watershed of Chen's career. As the first body of works not based on his emulation of previous masters, these distinct recent artworks were instead grounded on Chen's enthusiasm for cycling and the richly ornated reliefs and decors often seen in the local temples that he encountered along his many trips around Taiwan. These experiences and encounters also became an opportunity for Chen to change gear from his long-time appropriation of prestigious historical Chinese paintings, to a close examination of the island where he resides. The prototype of the architecture in this new series came from the now 200-year-old Butian (or Nuwa) Temple of the Zhuangwei Township in Yilan County, as well as the Lady Jade Temple next to the Guandu Temple in Taipei.

As for the mystical works of Stone Fairy, The View South and Stone Fairy, Deer at Rest, the two paintings depict monumental rock formations shrouded by clouds and mist—one dotted with banana leaves and the other featuring an auspicious deer—creating a transcendental atmosphere which evokes the land of the immortals. The texture of the rocks in these paintings is reminiscent of Taihu's porous stone at first glance, but in fact Chen took inspiration from Yehliu's unique landscape in the North Coast of Taiwan. By so doing, Chen demonstrates an intimate affinity with local Taiwanese culture.

In this sense, Meandering Toward the Clouds manifests Chen's life journey and cultural identity that is fixated on the land he resides. Chen's mosquito nail shanshui serves as his ultimate invitation for the viewer to tour a celestial mindscape which infuses new meanings into a traditional form.

Meandering Toward the Clouds

Sign up to be among the first to know when new exhibitions by Chen Chun-Hao or at Tina Keng Gallery open.
Sign Up