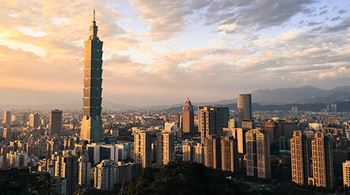 The bustling city of Taipei has an equally lively art scene, made up of tremendous museums, galleries and non-profit spaces. The National Palace Museum sits at the helm with over 600,000 artefacts spanning 5,000 years of history. Originally founded in Beijing in 1925, the Museum was relocated to Taipei during the Chinese Civil War in 1948 to safeguard its collection, which includes the famous jade cabbage—a detailed reproduction of a Chinese cabbage head reputed to have been part of the dowry of the Guangxu Emperor's consort Jin Fei in the Qing Dynasty (1644–1911)—along with ancient objects that include Song dynasty paintings and calligraphy, ritual bronzes, ceramics, early printed books and more.

Founded in 1983, the Taipei Fine Arts Museum showcases artwork by Taiwanese and international artists from the 19th century to today, and acts as the host for one of the region's best-loved biennials: the Taipei Biennial. The Biennial was borne from two exhibition projects conceived by the Museum to celebrate contemporary art: Contemporary Art trends in the ROC and An Exhibition of Contemporary Chinese Sculpture in the Republic of China, held on alternating years between 1984 and 1991 until they were merged in 1992 to form the Biennial.

With a solid institutional backbone, the city is also home to over 30 galleries. These spaces move between supporting contemporary artists and showcasing modern masters, such as Asia Art Center, which represents Li Chen, Chu Weibor and Yang Chihung, among others. The artful balance between modern and contemporary is a defining characteristic of many of the city's galleries, including Tina Keng Gallery, which has been instrumental in forging the careers of many Asian masters, including Zao Wou-Ki, Sanyu, Lin Fengmian and Yun Gee. TKG+—the gallery's experimental sister space—continues this legacy by working with emerging artists and providing a platform for experimentation across different media.

Taipei's galleries and art spaces are spread across the city. Those looking to avoid travel can spend time in Huashan 1914 Creative Park, which possesses a similar structure to Beijing's 798 Art Zone. The complex originated in 1914 as a wine factory and camphor refinery. It was vacated in 1987 and artists advocated for it to be used as an art space in 1997. The red brick buildings now host a number of exhibitions throughout the year, interspersed with cafés and knick-knack shops.

The city's more experimental spaces include TheCube Project Space, located in an alleyway in the southern part of the city. Founded by independent curator Amy Cheng and music critic Jeph Lo, TheCube takes pride in being one of few art spaces in the city that has the capacity to organise 'quality international exhibitions on a non-profit basis'. As such, TheCube has become a site of lively cultural exchange—a position that has been harnessed by the city as a whole.

A Scrap of History

The Rocks Return to Soil Where The Heart Belongs