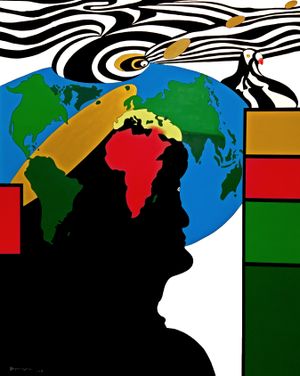 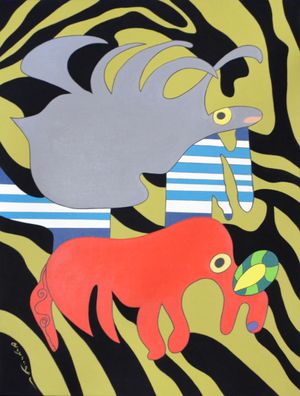 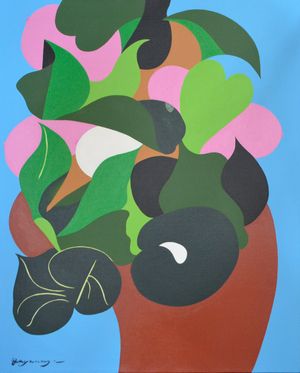 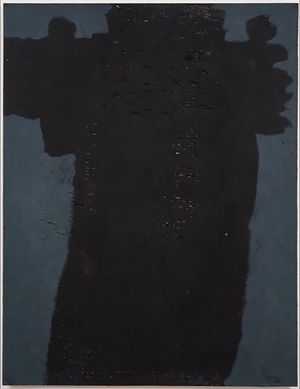 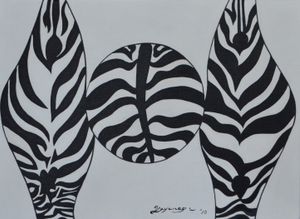 Whitestone Gallery Hong Kong is pleased to present Earth. Family, by Japanese artist Go Yayanagi. The artist's second solo exhibition in Hong Kong brings together paintings, screenprints, sculptures and mixed-media works from Yayanagi's archive, and reveals the accumulation of Yayanagi's voyages as well as the persistence of his practice.

For nearly seven decades, the Hokkaido-born artist Go Yayanagi has been manifesting his appreciation for the earth and all organisms through vivid canvasses of abundant exoticism. As the son of a rancher, Yayanagi grew up surrounded by horses. His quotidian interaction with animals and nature influenced Yayanagi's future travels and artistic pursuit. After graduating from Obihiro Agricultural High School, Yayanagi briefly entered Hoshi Pharmaceutical College in Tokyo, only to leave college midway and become an autodidact painter at the US Army base in Yokohama. In 1957, Yayanagi embarked on a two-year journey through the Southern Hemisphere in Brazil, Africa and other places in Asia.

Yayanagi's art is immediately recognisable for its fragmented compositions, playful atmosphere and kaleidoscopic patterns. In addition, the clear black lines in form of zebra patterns - in circular and irregular motions occurring in almost all his paintings and prints are referencing Japanese calligraphy, contrasting with bright colours and combining Ukiyo-e elements, Yayanagi named his unique genre 'Pop-Uki', which fuses the traditional Japanese form with pop art and simultaneously reflects a contemporary rendition of the Japanese popular culture at that time. Although Yayanagi's practice is rooted in Japanese aesthetics, his voice became distinctly imaginative and exotic. Yayanagi's encounter with the wildlife of Brazil, safari animals and tropical climates are pervading his paintings with symbols of travels and plantations, Who Owns the Earth (2007) and Illusion (2012) are such examples of his travelogue. Often from a Bird's-eye view or distorted perspective, Yayanagi's sceneries inspire imagination and invite viewers to puzzle the pieces together. A Sense of Wonder and Eye Signal Gesture (2013) creates such a vertigo-effect that reminds viewers of Psychedelic Art, whereas the monochrome optical illusions in The Infinity of Black and White (2010) is exemplary of 1960s Op Art. Another attribute of Yayanagi's art is its repetition. The same compositions, colour planes and exoticism can be found throughout his entire oeuvre. Similarly to Van Gogh, who often produced more than one version of a composition or particular subject. After all, it was the Dutch Post-Impressionist painter who inspired Yayanagi to become an artist himself.

The exhibition includes a series of paintings dedicated to Brazil. Pantanal (1958), Yayanagi's earliest work on display, features fiery colours that allude to the excitement and passion that the artist experienced during his sojourn in Brazil. Rio Night View (1961) was painted after the artist had long left Brazil and the colours employed and subject are visibly darker and deeper.

Earth. Family continues on the second floor of the gallery and Yayanagi's print works are presented in the library section and the first room. Between 1965 and 1968, Yayanagi was in Paris and his apprenticeship under S.W. Hayter at Atelier 17 laid the foundation of his etching and printing practice. Love Animal Journal and Earth. Family are both series of light, humorous and colourful prints created between 1970 and 80 that emphasise the artist's romantic view on the relationships between all organisms and the universe. According to the artist: 'You should seek further fields. I think of Obihiro as my hometown, but Sao Paulo and Paris are also my homes. Encountering new people, cultures and languages can be forms of art'.

Since 1954, Yayanagi's work has been exhibiting all over the world, at the Biennale in Sao Paulo and Paris, etc. His work is included in important private and public collections such as the Hokkaido Obihiro Museum of Art in Obihiro, The National Museum of Modern Art in Tokyo, The Museum of Modern Art in New York, Cincinnati Art Museum in Ohio, The Rockefeller Foundation in New York, and São Paulo Museum of Art in São Paulo, among many others. The artist currently lives and works in Japan.

Sign up to be among the first to know when new exhibitions by Go Yayanagi or at Whitestone Gallery open.
Sign UpLogin