Xavier Hufkens is pleased to announce a new exhibition by David Altmejd (b. 1974, Montreal, Canada), his fourth with the gallery.

Driven by his fascination with the beauty and mystery of the natural world, David Altmejd’s oeuvre is as diverse as it is arcane. It is a universe unto itself, one that encompasses breathtaking labyrinthine constructions in Perspex, strange hybrid beings, colossal human figures and complex mirrored structures. In this exhibition, the artist presents a new series of bronze figures, together with a group of sculptural matrices in mirrored glass, and an ensemble of sculpted heads. The antithetical nature of the works on display highlights the dynamic tension that is always present in Altmejd’s work, as well as a number of key themes that can be traced throughout the oeuvre: the human figure, reflection and structure.

Several of the bronze figures in the exhibition can be seen as evolutions of Altmejd’s ongoing series known as Bodybuilders. Originally modelled in plaster, the figures combine pristine, polished casts of hands and feet with raw, lumpy torsos and limbs. Scarred by the fissures torn through the plaster by the artist’s fingers, but also subject to the manipulation of the truncated hands, the bodies appear to be constructing and deconstructing themselves. Other works, however, are disrupted by incongruous organic and architectural elements. Here, the opulent surface textures and details that defined earlier sculptures have given way to a greater simplicity and an emphasis on the assemblage of individual physical elements (hair, feet or hands), gesture (walking, leaning), or the integration of a single, often surreal, focal point. At the same time, the works lean more towards the feminine, as evidenced by anatomical detail or attributes such as high-heeled shoes. Casting the plasters in bronze brings a new sense of potential to Altmejd’s work by allowing it to be sited beyond the gallery space, while the white paint maintains an essential visual link with the more fragile, original materials. The full-length figures are also seen alongside several works from the Rabbit Hole series: composite, mottled heads that are suggestive death, and whose features are obliterated by crystal-encrusted, seemingly endless chasms.

The idea of combining multiple elements to create a unified whole is given different expression in the mirrored matrix sculptures. Here, the artist focuses on the transmission of power, energy and uncertainty through a complex grid of extensions, duplications and refractions. While the structures resemble early Minimalist sculptures, the mirrored glass lends the work a degree of physical ambiguity: what appears to be light, airy and fragile is, in reality, dense, heavy and anchored. At first glance, the matrix works are impossible to fully comprehend: the viewer never sees his whole reflection, only multiple fragments of himself, in the same way that the surrounding gallery space is also absorbed, splintered and endlessly refracted. Altmejd has said of these pieces that he is interested in the perfection of the structure, and the notion of being able to create a seemingly infinite interior space within a finite exterior form. And herein lies not just the mainspring of David Altmejd’s art, but also the unifying force within the exhibition: the tension that exists between the infinite and finite, the lifelike and the surreal, the rough and the smooth, the beautiful and the grotesque, and the visible and the invisible. In L’ air Altmejd presents us with a paradox: solid, tangible forms that, through the absence of colour (white figures, black voids), or reflection and refraction (mirrors), seem to vanish from their surroundings. The only ‘escape’ from this hermetic, endlessly shifting, nebulous world being through the gaping, inky, endless ‘rabbit holes’ that, like vents, puncture the livid, featureless faces on the gallery walls.

David Altmejd’s exhibition Géants can also be seen in the Forum of the Royal Museums of Fine Arts of Belgium, Brussels as of March 18th and until August 21st. Six colossal sculptures will take over this central meeting point of the museum in a spectacular way. 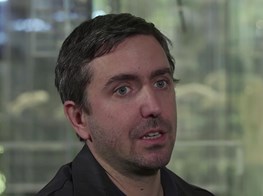 David Altmejd was interviewed by Christian Lund at the Louisiana Museum of Modern Art, Denmark in November 2015 in connection to the exhibition of his 328 x 640 x 714 centimetres sculpture The Flux and the Puddle  (2014). Among the many materials used for the sculpture are wax, mirrors, plaster, latex, feathers, ink, wood, steel wire and...

Sign up to be among the first to know when new exhibitions by David Altmejd or at Xavier Hufkens open.
Sign Up
}