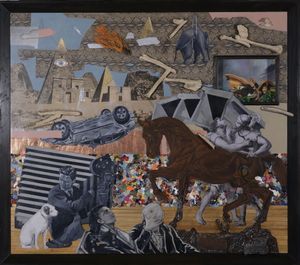 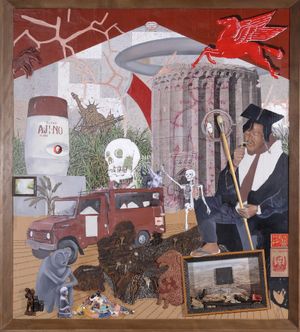 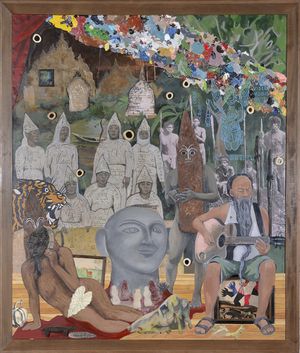 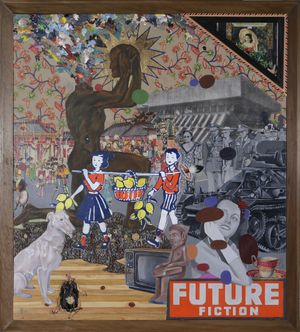 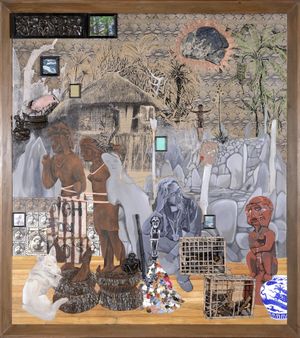 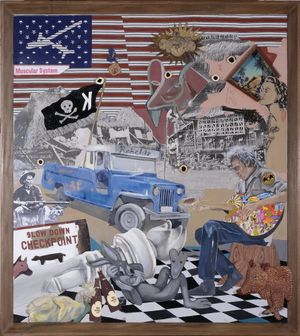 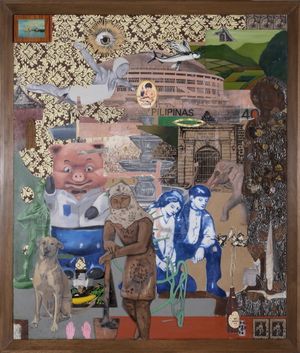 Working across painting, installation and sculpture, de Guia incorporates an eclectic mix of objects into his wall-based works and projects, which have included Ifugao rice gods, decorative torpedo bombs, and American jukeboxes transformed into Filipino jeepneys. Central to de Guia's work is the archive - his personal collection of objects, notes and mementoes - relating to localities and specificities of Baguio, and of the Philippines. His works humorously and piquantly comment on a multitude of issues, from the histories of occupation, trade and exchange that have influenced Filipino history and culture, to the relationships between community and commodities.

In his latest series of work in Future Fiction, de Guia continues his meticulous use of layers of relief, collage, and painting, made in a phase when the artist is at his most 'painterly'. The works bring together a year of rediscovery and inward reflection, amplified during a prolonged lockdown in the Philippines that is coming into its second year. Reclaiming and assembling older bodies of works on canvas (such as portraits of de Guia's mentors and artists) and objects, the back of these wall works feature patchworks of old and new: an homage to the aggregate plasticity of making-do in these current conditions. However, the overarching narrative revealed in de Guia's complex interplay is one not of resilience, but of survival, with local stories and figures emerging as monuments and heroes. Future Fiction captures the artist's imaginations of what's to come alongside reflections of the past - in a time of significant disjuncture.

Sign up to be among the first to know when new exhibitions by Kawayan de Guia or at Yavuz Gallery open.
Sign Up