Arin Dwihartanto Sunaryo was born in 1978, in Bandung, Indonesia. He studied fine art at Bandung Institute of Technology, graduating in 2001, and earned an MFA from Central Saint Martins College of Art and Design, London, in 2005. Sunaryo is dedicated to painting, pushing its boundaries with innovative techniques. He distills a passion for comic books, science fiction, and Japanese manga into abstract compositions animated by dynamic gesture, entropic progression, and alternating centrifugal and centripetal forces that gather and disperse pigments over the surface of his paintings. Rejecting the paintbrush in favor of direct application with his hands, Sunaryo then moved on to industrial methods. In 2008, his impatience with the prolonged drying time of oil paint, further protracted by the layered density of his application, led him to experiment with pigmented resin, which has become his signature material. In its natural, plant-derived form, resin connects with age-old methods of preservation, notably used in ancient Egyptian mummification and varnishes. Sunaryo uses synthetic resins to cast sleek, futuristic objects, combining the traditional and contemporary significance of this material with the aesthetic heroism of Abstract Expressionism.

In the series Cyan Magenta Yellow Black (2010), Sunaryo used only the base palette of mechanical color reproduction to make his expressionist abstractions. In the series Frozen Stratum (2012), he further developed his compositions to include layers of digital photographic material. The multiple planes in his poured resin paintings generate a curious dimensional quality, as a sequence of components becomes a flat, pristine, and unified composition. The material’s glossiness retains the trace of its fluid state. Sunaryo’s paintings capture shifts between solid and liquid, static and animated, synthetic and natural, and are rooted in the embrace of chance. In some works, what is ultimately displayed is the “underside” of the composition; when the resin dries, Sunaryo separates the painting from the ground and flips it over to reveal the finished work. Another way he attains flatness is by pressing glass against the still-wet resin, unpredictably altering the composition. Motivated in part by concerns around the waste products of such processes, Sunaryo has recently begun to repurpose resin remainders as material for sculptures. 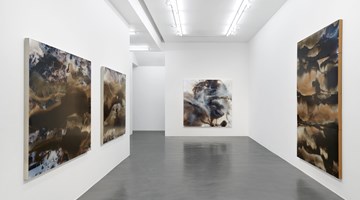 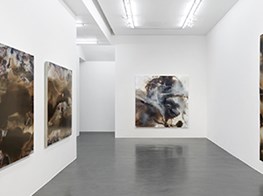 Arin Dwihartanto Sunaryo has always been an experimental painter. Having set aside the paintbrush in favor of his hands early on in his near-two-decade-long career, and later moving to more industrial methods using tools and resins, he rejected paint altogether in 2008. 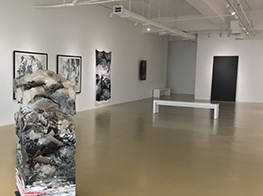 Art Radar profiles three internationally-recognised Southeast Asian artists presented in an exhibition curated by Filipino artist Gary-Ross Pastrana in Jakarta. The works on show demonstrate a thorough understanding and exploration of materials, which has resulted in unconventional and cross-cultural forms. Known to expand notions of... 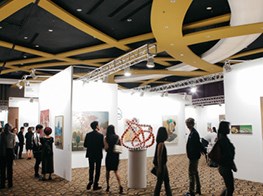 Held at the Sheraton Grand Jakarta Gandaria City Hotel, the inaugural edition of Art Stage Jakarta featured 33 international galleries from Asia, Europe and the United States, and 16 local galleries. In addition there were a number of supported events, such as talk shows, seven private VIP tours of collector’s homes, public artworks and two... 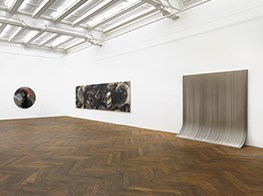 Sign up to be notified when new artworks and exhibitions by Arin Dwihartanto Sunaryo are added to Ocula.