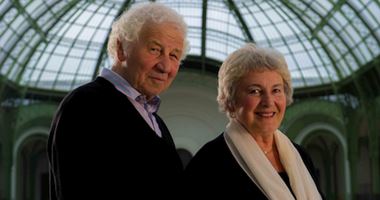 Towards the end of the 1980s, the Russian artist Ilya Kabakov developed a special form of installation that he termed the “total” installation. A member of the Moscow Conceptualists, he transformed the prints and paintings he had produced in the 1960s and 70s into three-dimensional space. In the early 90s, he also began producing this special form of installation both inside and outside of the museum context in collaboration with his wife and fellow artist Emilia Kabakov. The key element of a “total” installation, which Kabakov defines as an “entirely transformed space,” is the specific way in which the exhibition room is transformed and presented in the form of an open stage. The visitors, who play a central role in these installations, often find themselves confronted with a strong narrative structure.
In the installation The White Cube (1993), for example, a white, regular cube occupies most of the exhibition room. No opportunity is provided to look into the cube. Two ladders are set up in front of two opposite walls of the cube. The ladder, a real, functional item, which forms a triangle, contrasts with the strict vertical and horizontal lines of the abstract cube. The installation The White Cube plays with visitor expectations. The ladder in front of the cube initially casts doubt on whether it is part of the installation proper. Is the ladder there to be used? A board standing next to the cube provides user instructions.

In a lecture in 1993, Kabakov described the dramaturgical effect of his installations as follows: In the “total” installation “the viewer, who so far has felt rather free, like he does when viewing paintings or sculpture, finds himself controlled by the installation when he is near one, in a certain sense, he is its victim. But he is simultaneously both a victim and a viewer, who on the one hand surveys and evaluates the installation, and on the other, follows those associations, recollections which arise in him, he is overcome by the intense atmosphere of the total installation.”
With The Flying, (2005–2006), a series of wall carpets, Kabakov refers to the themes of flight and disappearance that characterized much of his early work. An example from Ilya Kabakov’s albums (1972–75) is The Flying Komarov. Looking out from his balcony at dawn, Komarov sees people flying through the air, sometimes alone, sometimes in groups. Finally, he joins them. These early motifs have been taken up in the current work: a single flying figure; a group of people who are holding onto the wings of an airplane; or a family drinking tea while floating in the air. The subject of flight can be interpreted in a metaphysical sense. Flight can also be understood, in the context of the artist’s emigration to the West in the late 1980s, as an expression of his physical distance to and personal memories of the Soviet system.

Ilya and Emilia Kabakov Represented By

It is about the cultural legacy of humanity, which is preserved not only in museums but also in our mental memory.

On Art, a new collection of essays by Ilya Kabakov, recently translated and edited into English by Matthew Jesse Jackson, begs a closer look at the life of an artist in permanent flux. One reason Il

Throughout this year, ambitious projects will be unveiled all over America — from an artistic jungle gym in Miami to a pirate ship docking in Northern California — and they don't cost anything to see.

The 2016 edition of Parcours will be sited in the historical center of Basel around the city’s iconic cathedral, inhabiting locations such as the cathedral’s chapel, Münsterplatz, the Museum of Culture, an underground tunnel below the Grand Hotel Les Trois Rois and historic locations along the river Rhine. Curated for the first time by...

Sign up to be notified when new artworks and exhibitions by Ilya and Emilia Kabakov are added to Ocula.
Sign Up Login