Recurring subjects in Marcel Vidal's paintings include human figures and ordinary objects that often appear in extreme close-up. They evade interpretation: paintings such as r and D (both 2017) restrict meaning by wielding only parts of the alphabet against an ambiguous, white background. Many of Vidal's paintings also evoke photographs taken in the dark with flash, as can be seen in the flattened white that seemingly floats in a dark grey space in the 'White Dress' series (2018).

In À la plage (Dad 1946-2018) (2019), Vidal portrays more of his father than his generally fragmented subjects. Vidal depicts his father drying his hair, although his face remains hidden by a large beach towel. The act of concealment alludes to his father's complex biography—a French national born in Algeria, who moved to Ireland in the late 1970s—behind an otherwise ordinary moment of drying oneself. À la plage was nominated for the Zurich Portrait Prize in 2019.

Marcel Vidal materials include fur, feathers, wood, concrete, rebar, chains, and even deer hooves, which he uses to construct sculptural installations. The sculptures can be imbued with an air of mystery and absurdity, such as the pentagram-sculpture that encases a small painting (Sausages, 2014). Other installations are reminiscent of violence, as in STINKFEST (2016), a wheeled structure that features black rods radiating from the centre in all directions.

Marcel Vidal explored the details of tents in 2020, investigating the subtle balance between colour, plane, and composition. The vertical canvas is divided in the middle in Green (2020), branching into a triangle towards the top. Vidal uses precise brushstrokes to differentiate the stretching and wrinkling of the tent's fabric, using subtle tonal shifts to suggest the physicality of a tent.

In 2019, Vidal was awarded the Hennessy Craig Award and the Golden Fleece Award. That same year, he was also included in the book 100 Sculptors of Tomorrow published by Thames & Hudson. 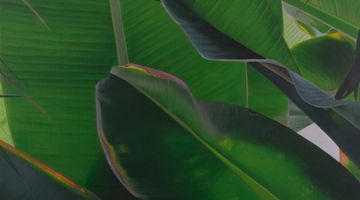 Sign up to be notified when new artworks and exhibitions by Marcel Vidal are added to Ocula.
Sign UpLogin