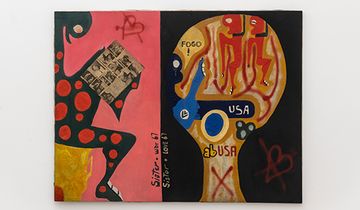 Born in São Paulo—where he still lives and works—in 1948, Sérgio Sister began painting in the studio of Ernestina Karmen and at the open courses of the Fundação Armando Álvares Penteado in 1964. His early paintings from the 1960s show influences from American Pop art—especially in his borrowings from popular culture such as comic strips—and Brazilian Pop art, which tended to be more political and violent than its American counterpart. The artist frequently employed graphic imagery in his works, such as a bleeding woman in Untitled (1966), or people hanging by their necks in Untitled (1967).

Sister was socially active as a newspaper reporter and a member of the Brazilian Revolutionary Communist Party, which called for action against the Brazilian military regime. He was arrested and imprisoned for 19 months at the Tiradentes prison in 1970. Although he continued to produce artworks in and out of prison, it was not until his visit to New York City and its vibrant art scene in 1985 that he began to consider the path of a professional artist. In his subsequent works, the artist moved away from figuration to focus more closely on colour and subject matter.

In 1996, Sister discovered the possibility of extending painting beyond the two-dimensionality of the traditional canvas, in the form of fruit crates. His 'Caixas' (crates), as they are known, were at first second-hand fruit crates that the artist had found and painted. Since 1999, however, he has been working with separate slats of crates so he can paint and assemble them into different combinations that interrogate the relationship between surface and materiality.

The 'Caixas' series has given rise to other ongoing series involving wooden bars. Notably, works in 'Ripas (strips)' are made of pairs of wooden strips painted in unmodulated colours characteristic of Sister's artwork. These were first exhibited in the 1997 Arco art fair in Madrid. In 'Pontaletes (posts)', aluminium and wooden bars are arranged to resemble goalposts. They were presented for the first time in Pinturas face a face (Painting Face to Face), an exhibition that showcased works by Cristina Canale and Sister at the Instituto Tomie Ohtake, São Paulo, in 2007.