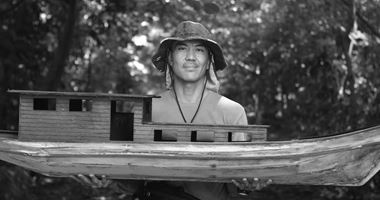 Tuan Andrew Nguyen was born in 1976 in Saigon, Vietnam. In 1979, he and his family emigrated as refugees to the United States, and he grew up in California. Nguyen earned a BFA from the University of California, Irvine (1999) and an MFA from the California Institute of the Arts (2004). He is a member of the artist collective The Propeller Group (est. 2006) and a cofounder of the artist-run alternative space Sàn Art (est. 2007) in Ho Chi Minh City (formerly Saigon). His work often deals with the cultural estrangement of expatriation and the experience of returning home to an unfamiliar place.

While still a student, Nguyen made the short black-and-white video The Two Tuans: A Civil Dispute (1998), in which he plays both of the figures immortalized in Eddie Adams’s 1968 photograph of the Saigon Police Chief shooting a Vietcong in the head. In Nguyen’s restaging, the artist’s head, recorded in live action, replaces those in the still image and the two trade “yo mama” barbs. Among the number of short documentaries he made during a 2003 visit to Vietnam, Better than Friends (2003) follows the daily life of a family running a small dog-butchery business in Ho Chi Minh City.

Nguyen has been the subject of solo exhibitions at Voz Alta Project, San Diego (2004), and Galerie Quynh, Ho Chi Minh City (2008). The latter, Quiet Shiny Words, centered on a collaboration with Vietnamese rapper Wowy SouthGanz and sound engineer Alan Hayslip. Nguyen also participated in the group exhibitions Mine, Lombard-Freid, New York (2003), and Eternal Flame: Imagining a Future at the End of the World, REDCAT, Los Angeles (2007), and was featured in the 5th Asia Pacific Triennial, Queensland Art Gallery, Brisbane, Australia (2006–07). He collaborated on Dinh Q. Lê’s The Farmers and The Helicopters (2006), which was presented at the Museum of Modern Art, New York, for Projects 93 (2010) and acquired by the museum. Nguyen lives and works in Ho Chi Minh City.

Tuan Andrew Nguyen shares his insights about his newest work, A Lotus in a Sea of Fire, titled after a book by the Nobel Peace Prize nominee and famed Vietnamese figure Thich Nhat Hanh.

Zoe Butt is the artistic director of The Factory Contemporary Arts Centre in Ho Chi Minh City, the first purpose-built space for contemporary art in Vietnam. Founded in March 2016, the Centre was desi

Our mission is not just about art, but also to teach Asians about each other through art, through public programming and other mediums.

Everything had to be reinvented for the 2017 Whitney Biennial — the first to take place in the new riverside home of the Whitney Museum. But then, this leading showcase of contemporary American art f

Combining modern and contemporary artwork in the same space, The Armory Show features work from a range of media, from painting and photography to sculpture, video and installation. The Armory Show 2

Vietnam’s blossoming contemporary art scene is held in check through a complex set of bureaucratic hurdles coupled with hit-and-miss government censorship and lack of critical infrastructure funding, at a time when it should be enriching, not sabotaging this shining asset. The roots of this inertia and entanglement are based in military...

Be among the first to know when new artworks and exhibitions by Tuan Andrew Nguyen are added to Ocula.
Sign Up Login