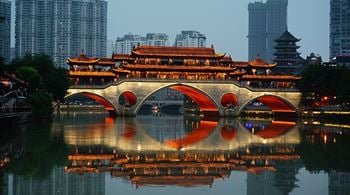 Chengdu is the capital of Sichuan Province and one of the most populous cities in Western China. While it is not the most developed market for contemporary art, Chengdu's art scene is vibrant and, with Yunnan to the south and Tibet to the west, uniquely inflected by the region's ethnic and religious minorities. The city is also home to many of the graduates of the esteemed Sichuan Fine Arts Institute in nearby Chongqing.

Chengdu's pre-eminent gallery, A Thousand Plateaus Art Space, was founded in 2007 and champions local artists including Chen Qiulin and He Duoling, the latter of whom opened his own eponymous museum in 2018. A Thousand Plateaus is the only gallery in the region to regularly take part in major international art fairs including Art Basel in Hong Kong.

The city also has its own art fair, the Art Chengdu International Contemporary Art Fair, which was established by collector Huang Yu and art advisor Huang Zai and first held in April 2018. The event has drawn major galleries from the region and beyond, with Boers-Li Gallery, Galerie Urs Meile, and Sadie Coles HQ among the 31 participants in the inaugural edition.

Other notable galleries in Chengdu include K.Gallery, multi-functional space Yiiie Gallery, and Hello Space, whose Chinese name is a pun for 'black snail'.

The city's leading public institutions include Chengdu MOCA, the Wuhou Shrine Museum, and the Sichuan Art Museum, which displays both ancient and contemporary art. Private museums that make the most of Chengdu's natural environs include the Blue Roof Museum, which borders wetlands home to egrets; the 3,500-square-metre Luxelakes*A4 Art Museum (formerly A4 Contemporary Arts Center), which overlooks a manmade lake in an eco-city; and the Zhi Art Museum, a striking building designed by Japanese architect Kengo Kuma and located at the foot of Laojun Mountain.