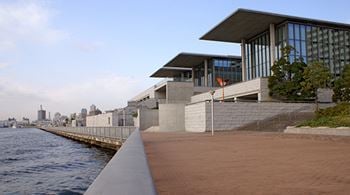 One of Japan's first ports to open its doors to the West in 1868, the historic city of Kobe remains an important international trading centre, while being home to a number of institutions dedicated to culture and the arts. It is one of the largest cities in Japan and considered a leading force in the nation's fashion industry.

Facing the waterfront, Hyogo Prefectural Museum of Art is housed in the concrete building designed by the renowned Japanese architect Ando Tadao. Founded in 2002 as a symbol of 'Cultural Reconstruction'—in response to the Great Hanshin-Awaji Earthquake of 1995 that had gravely affected Kobe—the Museum holds contemporary art exhibitions of many varieties by Japanese and international artists. It also houses the Yamamura Collection, which focuses on Japanese avant-garde of the fifties and sixties— particularly the activities of the Gutai Group—as well as the 'New Wave' artists of the 1980s.

Between 2007 and 2015, five editions of the Kobe Biennale were also held on the waterfront. Its main features included the 'Art in a Container' International Competition, which invites international artists to fit the interior of 40 foot long containers works in various media.

Yokoo Tadanori Museum of Contemporary Art (Y+T MOCA) is within walking distance from the Hyogo Prefectural Museum of Art. It is built around the collection of Hyogo-born graphic designer and artist Yokoo Tadanori, and while dedicated to making his work available to the general public, Y+T MOCA also hosts exhibitions featuring other contemporary artists whose works share common ideas with Yokoo's practice.

Rokko Island, a man-made island built in the early 1970s, is the home of Kobe Fashion Museum—the first public museum of fashion in Japan. Amongst its impressive collection are more than 9,000 Western costumes and folk costumes from over 70 countries, ranging from the 18th century to the modern era; 1,500 fashion plates; and a library that offers fashion books and magazines in multiple languages. The Museum building also houses Kobe Artists Museum, which opened in 2007 with the mission to show the works of contemporary artists with affiliations with the city.

For an encounter with more historical art, head over to Kobe City Koiso Memorial Museum of Art—also located on Rokko Island. It is dedicated to the work of Koiso Ryohei, a 20th century Kobe-born artist renowned for his western-style, naturalistic paintings.

Another institution, Kosetsu Museum of Art, established in 1972, reaches back even further in history: centering around the collection of Murayama Ryohei, founder of the Asahi Shimbun newspaper which has been ongoing since 1879. This Museum includes 18 Important Cultural Properties and 27 Important Cultural Assets, as designated by Japan's Agency of Cultural Affairs. Found among these treasures with their esteemed qualities are Buddhist scroll paintings, calligraphy, Momoyama period (1573–1615) tea ware, traditional weaponry, and early modern paintings.