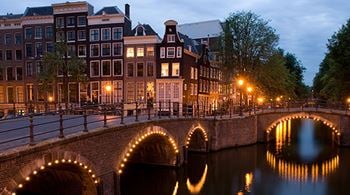 Once home to the likes of Rembrandt and Van Gogh, Amsterdam remains one of the most exciting places to encounter art. The prestigious Stedelijk Museum—established in 1874 by a group of Amsterdam residents—continues to stand as the Netherlands' leading institution to showcase modern and contemporary art.

For enthusiasts of film and photography, EYE Filmmuseum and Foam are must-visit destinations in Amsterdam. Sometimes called 'the cinematic memory of the Netherlands', EYE houses the ever-growing collection of more than 40,000 films (both Dutch and international) in all genres. EYE is also acclaimed for its vast archive of posters and photographs, and expertise in film restoration, research and education. Located in one of the city's historic canal houses, Foam is a museum of contemporary photography devoted to promoting emerging and established talents. Among its international stars are August Sander, Diane Arbus and Richard Avedon, as well as the Netherlands' own Rineke Dijkstra, Erwin Olaf and Anton Corbijn.

In addition to its prestigious institutions, the city's galleries have made lasting contributions to Amsterdam's reputation as an international hub of contemporary art. Since its establishment in 2000, Annet Gelink Gallery has closely followed the latest tendencies and developments in the visual arts, championing leading Dutch artists Erik van Lieshout, Ed van der Elsken and Maria Barnas. Upstream Gallery—founded in 2003 and recently moved to a 17th-century canal house—is renowned for its experimental exhibitions and maverick artists. For a brief but concentrated experience of the Amsterdam contemporary art scene, one might benefit from the Amsterdam Art Weekend—an annual four-day event in November that is organised by major institutions and galleries in the city and transforms the area into a festival of exhibitions, performances, lectures and tours committed to contemporary art.

In 2013, two of Amsterdam's most celebrated historical museums have reopened after major refurbishments. The Rijksmuseum holds the Netherlands' largest collection of art and art objects, ranging from 500 years of Dutch painting to centuries-old costumes and delftware. At its heart, however, lies the works of the Dutch Golden Age Masters: 40 Rembrandts and four Vermeers, as well as paintings by Frans Hals, Jan Steen and Ferdinand Bol. The museum collection also extends beyond Europe, with nearly 8,000 objects from the Asian region. Second only to the Rijksmuseum in popularity, the Van Gogh Museum holds more than 200 paintings and 500 drawings of the internationally beloved painter and works by his contemporaries.

Image: A view of the Reguliersgracht on the corner with the Keizersgracht, in Amsterdam, the Netherlands at dusk. Photo: Massimo Catarinella (CC BY-SA 3.0).