Organisers Artangel commissioned sound art and installations exploring the history of 'the island of secrets'.

While it is now administered by the National Trust, the area was controlled by Britain's Ministry of Defence for most of the 20th century. It was used in the development of navigation systems, nuclear weapons, and experimental radar programmes with names like 'Cobra Mist'.

'A weather-beaten natural environment that survived both the military operations of the 20th century, the Ness felt like a potent place to invite artists and writers to make it their own test site for the sculptures, drawings, spoken words and online films of Afterness, said Michael Morris, co-director of Artangel, which organised the exhibition in collaboration with The National Trust.

In Afterness, works by participating artists will appear in unusual venues like the Black Beacon, an octagonal wooden tower built in the 1920s to house a homing beacon for military aircraft.

The Black Beacon will be transformed into the Library of Sound, a place to hear field recordings captured over the past decade by Iain Chambers, Chris Watson, and DJ Brian d'Souza.

d'Souza has also established a 24-hour online radio station called beacon.black with two audio streams: one of field recordings made on Orford Ness that include the sounds of migratory birds, gulls and the wind, and the other exploring the island's history of military surveillance and broadcasting.

'The juxtaposition of these sound sources, alongside the coastal erosion that led to the slow collapse of the Orford Ness lighthouse in 2020, speaks urgently to our contemporary predicament,' Morris said. 'On the Ness, you are in the eye of the storm. It's as if nature is in the process of disentangling itself from the hand of humanity.'

At a shelter once used by the Atomic Weapons Research Establishment (AWRE) for vibration testing, Alice Channer will make a mutant bramble sculpture out of rolled aluminium and welded-on thorns that will overwhelm architectural models of Orford Ness's military buildings. The work's title, Lethality and Vulnerability, alludes to military trials to test the vulnerability of aircraft bodies conducted at the site from 1938 until 1959.

Emma McNally will show a nine-metre-long graphite drawing on paper in the AWRE's Armoury. The drawing, which encompasses both the atomic and the atmospheric, was informed by the knowledge that research at Orford Ness directly contributed to the UK's first nuclear test explosions, which were conducted in Western Australia in the 1950s.

A visitor experiencing Ilya Kaminsky's sound walk, I See a Silence (2021) on Orford Ness, Suffolk. Commissioned and produced by Artangel. Presented in partnership with the National Trust. Photograph: Thierry Bal.

Tatiana Trouvé's installation The Residents will be displayed in Lab 1, which was built in the 1960s to test weapons. The building's roof has since fallen in, and its interior is partly underwater, but Trouve restores objects such as blankets, chairs, books, and recording equipment to the space rendered in more resilient materials—aluminium and bronze. The installation is Trouvé's first commission in the UK. A major survey of her work will be presented at the Centre Georges Pompidou, Paris in 2022.

Ukrainian American poet Ilya Kaminsky's I See a Silence forms a soundscape audiences can listen to while walking the Ness, beginning at the Bomb Ballistics building.

The exhibition opens on 1 July and continues until the end of October. —[O] 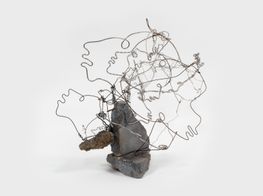 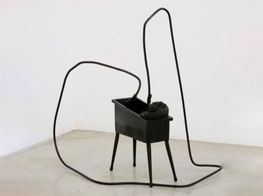 French-Italian artist Tatiana Trouvé's work explores time, memory, and materiality through experiments with architecture and spatiality. Life Trouvé was born in 1968 in Concenza, Italy. She spent her childhood in Dakar, Senegal, where her father 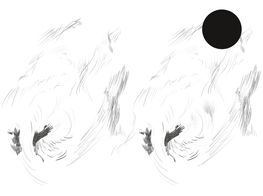 Born and raised in France, Paul Maheke is a London-based contemporary artist with a wide-ranging practice. Fast emerging on the international art scene, Maheke is becoming known for his collaborative, dance-oriented performative works and video