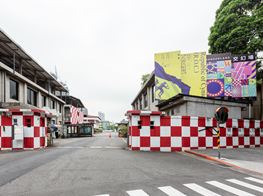 The biennial art award, organised by the Taoyuan Museum of Fine Arts (TMoFA), Taiwan, grants a prize of NTD 500,000 to the Grand Prize winner.

An international call for entries was placed in June 2020, making it the first time the award received submissions from both Taiwan and abroad since its inception in 2001. Reflecting the broad scope of the award, there were no limitations on material, category or size of the entries as long as they had not been previously exhibited or recognised by other awards.

'Taoyuan International Art Award is in the foreground of the development of the Taoyuan Museum of Fine Arts, and even more so, that of the vision of Taoyuan city toward the international art scene', said Liu Chun Lan, director of TMoFA.

The award underwent a selective process, beginning with an online review where only 17 out of over 600 submissions from 46 countries proceeded to the next stage.

The final round involved an on-site review at the Taoyuan Arts Centre, where the jury evaluated the exhibiting artworks and interviewed each finalist. This year's jury for the final round of Taoyuan International Art Award were Director Liu Chun Lan; Chen Yung-Hsien, chairperson and professor at National Taiwan University of Arts; Roan Ching-yueh, professor at Yuan Ze University; Wei You, curator of Taiwan Contemporary Culture Lab; Joan Pomero, assistant professor at Tainan National University of the Arts; Lai Yi-Hsin, director of Chiayi Art Museum; and Robin Peckham, co-director of Taipei Dangdai.

The Grand Prize, announced on Saturday, was awarded to Ting Chaong Wen for Going Home. Beginning with the now dilapidated residence of a late councilor of Taiwan Provincial Consulative Council, the work traverses through the council building's storage room to consider the potential of symbols to reinforce state ideology.

'The selected artists have shown a sensitivity in their observation toward the culture trend and an incisiveness with the usage of materials chosen, which has strongly impressed the jury,' said Chen Yung-Hsien, chairperson of the jury for the final round.

The works in the Taoyuan International Art Award exhibition address issues of historical and contemporary relevance, including the Japanese colonial period in Taiwan; the dismantling of a Confederate monument in North Carolina, U.S.A., in 2017; conflicts arising out of the global economy; and investigations into the socio-political histories of the art object.

The Taoyuan International Art Award exhibition continues through to 18 April 2021 with on-site and online events including a guided tour, the Audience Choice Award and a forum featuring members of the jury, critics, and artists.

The call for the next Taoyuan International Award is scheduled for June 2022. —[O]