Partly inspired by a visit to the Guggenheim, the Golden Lion-winning work hasn't yet been shown outside Europe.

The most celebrated work at the 2019 Venice Biennale will show in the United States beginning in September this year.

The work is an indoor beach opera that was written in 2017 and translated into English for the biennale.

In Venice, audiences gazed down from a balcony at around 24 beachgoers who bathed in the artificial heat and light of a space filled with 30 tons of golden sand. Occasionally, different performers would break into song, revealing details about their lives and the impacts of climate change.

Writing for Ocula Magazine in 2019, critic Mohammad Salemy said the work 'demonstrated how it is possible to be both socially relevant while pulling off one of the most likeable national pavilions in recent memory.'

'What powered this exhibit was its knowing fakeness—a nod to a future when beaches have been replaced by their imitations,' Salemy wrote.

In the years since the biennale, the work has been shown in Norway, Switzerland, Denmark, and Germany. Just last weekend, it showed in a swimming pool that's part of a former East German coal plant complex near Berlin.

While the work was inspired, in part, by a visit to New York's Solomon R. Guggenheim Museum where the artists imagined looking down at a performance from the spiralling ramp above, it hasn't yet been shown in America. 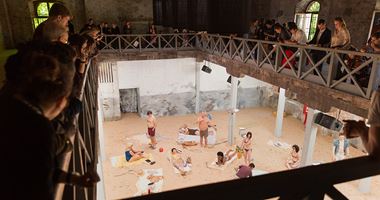 The U.S. premiere of the work will take place at the Brooklyn Academy of Music from 15 to 26 September. It will then continue on to Arcadia Exhibitions in Philadelphia; The Momentary in Bentonville, Arkansas; and the Museum of Contemporary Art, Los Angeles (MOCA), where it will be co-presented by the Hammer Museum, MOCA, and UCLA's Center for the Art of Performance, according to ARTnews.

Sun & Sea (Marina) will also show in Athens from 1 to 2 September as part of the Epidaurus Festival, and at the Malmö Konsthall in Sweden from 2 to 14 November.

The work has far outlived the artists' initial expectations. The 60-minute performance was initially looped for eight hours every day of the vernissage at Venice, but then dropped to just one live performance each week as funds ran short.

'Going into the vernissage week, we didn't have enough money to guarantee us until the end of the Biennale, even performing once a week,' Lucia Pietroiusti, the pavilion's curator, told the New York Times in 2019.

They launched a crowdfunding campaign that gained significant attention after the Golden Lion win and allowed them to maintain the weekly performances for the six-month duration of the event. —[O]