In Conversation with
Sheyma Buali
15 March 2016

Art Dubai celebrates its tenth anniversary this year. In addition to the booths of the 90 galleries who will be represented at the fair, Art Dubai will also present an extensive not-for-profit programme, which includes its critically acclaimed Global Art Forum (GAF). 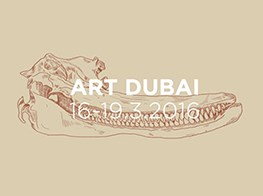 This year GAF celebrates its tenth year by looking back as a way to look forward. Titled The Future Was, the forum asks questions such as: what did the future look like when this all began? And why did an art fair endeavour with such a forum?

The Forum is conceived by GAF commissioner, Shumon Basar, along with this year's two co-directors researcher and artist, Amal Khalaf and archaeologist, Uzma Z. Rizvi.

Together they have invited a range of speakers to participate in GAF's events—from Alice Gorman, space archaeologist; Noah Raford, advisor on innovation at the UAE Prime Minister's office; to Monira AlQadiri, visual artist'—ultimately using the forum to raise the question of how the future holds up to its imagined fate.

In this Ocula Conversation, Khalaf and Rizvi discuss the Global Art Forum, and specifically its theme, challenges, and the stand out sessions. 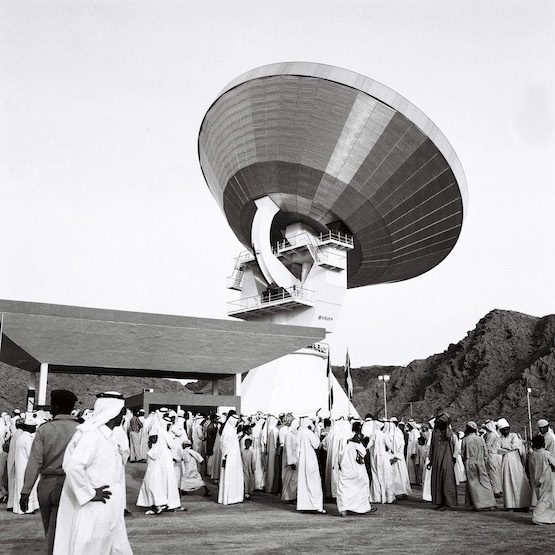 SBWhat has been most challenging about this year's Global Art Forum? 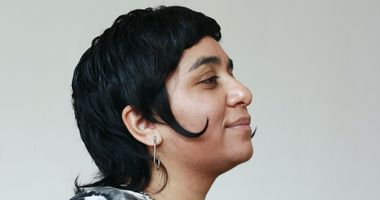 AKThere is an urgency to opening up questions about the future, at a time that feels consumed by crisis and precarity. There is a weight that comes with this.

UZRI think there's a certain hubris to traversing time that humans have that has a history in science, in imagination, and in art. The challenge always is not to trip while taking that walk, skip or jump through time.

SBThe temporal oxymoron of the title gives a different view from conceptions of a linear past or future. How did you approach this?

UZRAs someone who spends her life studying time, I can assure you, there is nothing straight about time. So if we provide time with the ability to inhabit spaces in and out of the limits of our measurements, time itself opens itself up and that actually makes programming much easier. It is an emancipatory gesture in that form.

AKWe don't think of the future and past in a linear teleological way, and the title allows us to really ask what the idea of the future means, or can mean. If we think of all the possible temporal modes or time frames that we exist in, we can escape a short-sighted, limiting view of the past, future and our present. We can have multiple time frames, from evolutionary or geological time to 5 minutes from now.

SBThe two launch events have offered glimpses of hope. But there has also been the mention of the future's failure, as Amal said in her introduction in the first launch event in Dubai last January 'saving the future from the future.' How do you balance failure and hope in your program?

UZRI do not think we need to balance failure and hope. I actually think there is much hope in failure. It speaks more to the experimental nature of the human spirit: we keep trying until we figure it out. And when we think we've figured it out, things have already changed, and so really, we just fail again but just not as much. I would like to think that both are part of the same, and I think our program plays with that simultaneity as well.

AKNavigating intersections of speculation, imagination and warning means inhabiting the grey areas between hope and failure and many other spaces too. 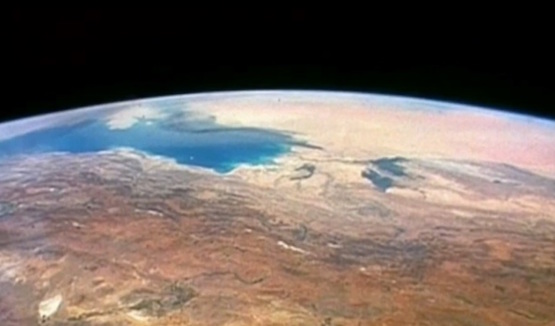 SBWe have often seen the future in terms of utopia and dystopia, but of course, not so black and white. How does this play out in the program?

UZRWe have invited speakers to play with both utopic and dystopic forms and that has, for example, led us to spaces of imagination and enchantment. I think our programming has really positioned itself in the spaces between all the various binaries that the world is often comfortable slotting things into because that feels somewhat constrained and oppressive, no?

AKI would say that in many ways, the future is seemingly already here and I think a majority of the sessions address in some way what IS or what modes of thinking and practice can take us to the spaces where we can begin to exist in other forms in the future.

SBDescribing the future in terms of 'derivatives' and 'contingencies' is unique in our arts and culture bubble. I wonder if I am alone in thinking that 'The Future Was the Market' session is fairly bold among the rest. What can we expect from this?

AKThe influence of the financial markets is critical to discuss, especially now. Elie Ayache was a trader himself, and I am excited to hear his account of the markets in the context of the forum. His session will present the market as material and a medium, addressing how markets can write futures, and how the way they are written can create futures that are in principle unforeseeable.

UZRI have never really gotten the sense that GAF hides behind or lets' itself safely settle in bubbles. If anything, GAF has always popped bubbles, introduced criticality, and reminded us that being comfortable in an art and culture bubble is just lazy. Rather than hide behind the notion that art has nothing to do with the market at Art Dubai, we thought it was important to think about ways in which we might think about these relations. We are excited to have Elie Ayache speak at GAF this year and I'm looking forward to his presentation to help us think through the market in critical and interesting ways.

SBAnother stand out session is the one with Adrienne Maree Brown entitled, 'The Future Was Collective.' Rather than looking at various realms of science and vision, this one looks at humanity in a timeless sense. Can you tell me about this session?

AKAdrienne Maree Brown is one of the most inspiring humans I know! Aside from being an Octavia Butler scholar, writer, organiser, facilitator and a doula—she is also the co-editor of Octavia's Brood: Science Fiction Stories for Social Movements. With Walidah Imrasiah, she coined the term 'visionary fiction', a radical science fiction. They believe that 'all organising is science fiction'. As a facilitator she runs 'visionary fiction' workshops for social movements, many of whom are talking about and aspiring to a world that doesn't currently exist. But collectively dreaming up futures means that we can begin building it into existence. This session will remind us how today we may have forgotten to imagine and how collective, research and action are required to face and understand uncertain futures.

UZRI am so very excited about Adrienne Maree Brown! I have long admired her work and their approach to collective activism through literature. It is important to think through collective action critically and to think more carefully about what kinds of futures our collective action or social movements might engender. More than anything, bringing in an intersectional standpoint on these conversations at GAF will be remarkable, and will push us to think in wonderfully different ways. 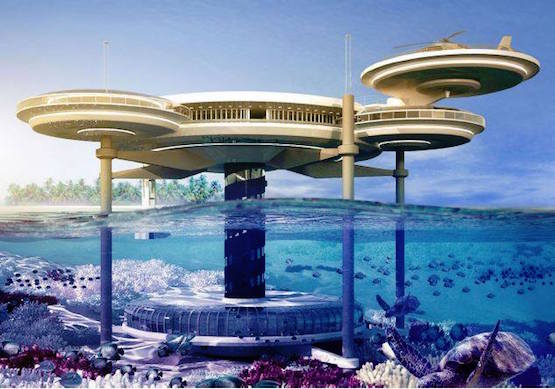 The Future Was A Computer Generated Image (2015). Courtesy WTD Magazine.

SBSophia AlMaria's film commission is being presented in two parts. The first part was screened at the London launch event at the ICA in January, followed by a talk with GAF commissioner, Shumon Basar, where they discussed the desert as metaphor for the future in a lot of popular sci-fi literature and film. What can we expect from the 2nd part, which will take place in Dubai? 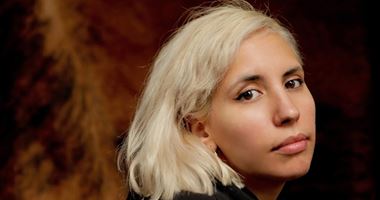 AKIt is so exciting that Sophia is creating a part two to the film, she has suggested that there may be more 'hope' in this new one. Some of the references from the first film came from her trip to see some of the oldest rock paintings in the world in South Africa. Seeing these images from millenia ago triggered this idea of deep time and deep futures in the desert that come up with the film. I am very excited that she and Shumon are going to be joined by Lauren Beukes, author of the amazing sci-fi novel Zoo City, graphic novelist and filmmaker from South Africa, whom Sophia met while spending time there. I believe Lauren and Sophia will be taking a desert trip together directly before GAF!

UZRBoth parts of Sophia's film really do visually capture the ways in which this years' edition of the Global Art Forum traipses through time, slipping in and out of moments and meaning, all within the contemporary. The desolation, the confusion, the hope: it is all gloriously present. This is not something to be missed!

SBHow do you think your two backgrounds merged in relation to the programming of GAF 10?

UZRI am so very thrilled and honoured to be working with Amal. I've long admired her work, and in particular the community engagement that runs through the Edgware Road project. I think our commitment to an intersectional decolonised practice unites us in a way that runs deeper than any national or disciplinary divide might suggest.

AKI am a huge fan of Uzma and the conversations we have been having are mind expanding for me. As Uzma said, we come from practices in our other lives which are grounded in a politics of working with people around issues of justice and social change—it has been a huge privilege to have been able to have the discussions we have had and to imagine and create many possible visions for the forum together. The effect of being able to work with someone who thinks in millennia has been incredible—my reading list has certainly grown as has my hope for the future!

SBIs there a panel/invitation in the program that you are most looking forward to?

UZR[laughs] Really? After spending as much time as we have hunched over spreadsheets, or squinting at the computer monitor; having had as many cups of coffee, all the skype connections, and long discussions over amazing people and their schedules, we have a roster of people who inspire, excite, and challenge us. I am excited about all of it.

AKI am excited about all of it and especially the conversations that will come out of bringing everyone together. I look forward to seeing where it can go. —[O]

Art Dubai is the leading inter­national art fair in the Middle East, Africa and South Asia. The tenth edition of the fair takes place March 16-19, 2016 in Dubai, United Arab Emirates.   Art Dubai is held under the