In the Studio With Brice Guilbert 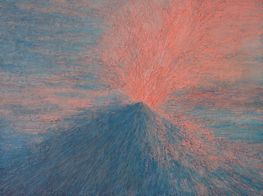 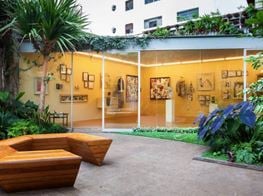 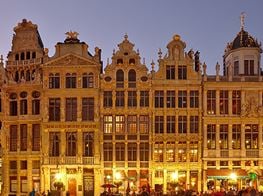 Born in Montpellier in France, Brice Guilbert relocated to Réunion Island when he was 2, spending his childhood at the foot of the Piton de la Fournaise volcano. Its looming presence is revisited in the artist's paintings, in which layers of oil stick form luminescent outlines of the volcanoes' peaks.

Guilbert also reflects lyrical portrayals of Réunion in songwriting, creating folk music sung in Creole, further intertwining his artistic practice with his experience living on the island. Releasing six albums between 2005 and 2019, the artist has also exhibited widely, with recent presentations at galleries including Mendes Wood DM and Pace Gallery. The latter will bring together an online exhibition of his work opening 5 May, and on 18 June a presentation alongside works by Julien Auregan and Laurent Veldekens will open at 10N, Menorca.

In this interview, Guilbert joins Ocula Advisory's Rory Mitchell, speaking from his studio in Brussels about his technique and his thoughts on the volcano as a recurring motif in his work.

Can you tell me about your childhood and how this informed your choice of an erupting volcano as a recurring motif in your work?

I lived in Réunion from the age of 2 to 14. I am French but feel very connected to the island and still return there regularly. I actually speak Creole.

I lived at the foot of the volcano Piton de la Fournaise, but I have never seen a real eruption, although the landscape and the projection of light is really of more interest to me.

Everybody asks me why I paint volcanoes, and really it is my connection to the island of my childhood; the image takes me straight back to Réunion.

I now live and work in Brussels, which is flat and often grey in comparison, so somehow these paintings bring a colourful and joyful energy to my life here.

The paintings are often but not always small in scale. Could you speak about scale and also the medium itself, which seems to be particularly significant to your practice?

Initially I made very small paintings using oil sticks on paper. I cook my own oil sticks—it took a long time to develop, because I wanted to learn how to make them like Henri Sennelier did for Picasso.

The idea was for this to allow me to be more economical, but I also wanted to avoid the glossiness of industrial oil pastels. Mine are closer to the encaustic technique that contains a matte quality.

The sticks themselves are made using a heat machine here in my studio, so in a way I work with fire to make fire. The texture created using this medium enhances the sensation of painting being a physical experience.

Maybe I also like the idea of working with a tool that is not used by many people, because I am drawn back to my Creole upbringing and speaking a language only spoken by such a small group of people.

Can you tell me more about drawing and its role within your practice?

I consider myself an artist who draws primarily rather than paints; I like nothing between my hands and the paper, so no brush. I prefer using pastels and oil sticks.

I have a book by the French art critic Philippe Jaccottet about drawing, which contains all of these short biographies on artists. I like the idea of recovering these stories and histories, so I began tearing out pages from these books to make works.

This is how I started making these images, but now I paint on cotton rather than sheets of paper from antique books.

Your treatment of light is notable in these works, which often depict volcanic lava and fire emitting startling light. This treatment recalls works by the Dansaekhwa artists from South Korea. Was this an influence at all?

I work with a lot of layers. Sometimes darkness comes from light, but it is the contrast I try to explore using this technique. Each painting has its own life and tries to reveal more for the viewer to discover beyond the first impression.

I work on one painting at a time based on the same subject but in different palettes. Each day is different, and I follow my instincts. So yes, this has become a kind of an obsession.

You are also a musician. What kind of music do you make?

My music is also strongly connected to my Creole heritage and the lyrics are written in Creole. I make guitar folk music which gives me some space from painting, but of course, they come from the same place, so my music and paintings are inevitably intertwined. —[O]