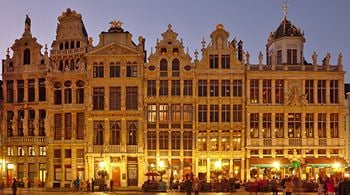 At the heart of Europe, Brussels is a bustling, ever-changing city with a unique and highly active fine art scene. Over the centuries the Belgian capital has drawn European masters from Pieter Bruegel to Auguste Rodin, René Magritte, and Paul Delvaux. Heritage and UNESCO sites ranging from the medieval Grand-Place to 17th-century guild halls, a 19th-century stock exchange, iconic Art Nouveau and Art Deco town houses, and the futuristic Atomium building, amidst multiple green spaces define the urban landscape of this cosmopolitan cultural centre.

For a city at the heart of European politics and bureaucracy, Brussels' contemporary art scene is highly anarchistic and anti-authoritarian, defying categorisation and standardisation. Highly decentralised and diverse, there is no principal art district; instead, networks and groupings of various migrant and local contemporary artists and their collectors are scattered across the city's districts in all manner of spaces. Empty and abandoned spaces across the city have been transformed into places of art, with even major institutions such as Kanal—Centre Pompidou occupying former industrial spaces.

The city's contemporary art museums and institutions—the Musée Modern (Royal Museums of Fine Arts of Belgium), the Kanal, Wiels Contemporary Art Centre and Centrale for Contemporary Art—give just a small sample of the Brussels art world. An abundance of independent and alternative exhibition spaces and contemporary art galleries help Belgian and migrant artists find their own path. Galleries in Brussels like Templon, Xavier Hufkens, Galerie Greta Meert, Almine Rech, Office Baroque, and Rodolphe Janssen, as well as non-profits such as La Loge and Complot, and independent institutions such as the Millennium Iconoclast Museum of Art and the Boghossian Foundation (based in Villa Empain) act as the backbone to the city's contemporary art scene.

With one of the highest concentrations of collectors in Europe and a large number of galleries and independent art organisations that offer support and stability to newer artists, Brussels attracts a wealth of international artists, evident across the multi-cultural collaborations and exhibition spaces dotted across the city.

Major exhibitions are sometimes held at the Théâtre Royal de la Monnaie, though rarely do all art circles converge in this manner. The principal exception is the Art Brussels contemporary art fair (established in 1968), when artists, galleries, and art lovers from all over Brussels and overseas converge in one place. Other smaller alternative art fairs have arisen in recent years, including Art Truc Troc, the Affordable Art Fair, Independent, and Poppositions. These independent efforts attempt to alter gallery hierarchies and provide further space for emerging talent.

ONE THING LEADS TO ANOTHER