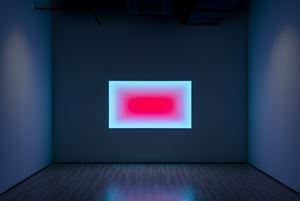 Almine Rech is pleased to present a new experiential light work by James Turrell, created on the occasion of his first solo show at the gallery's Shanghai space. Opening on November 5, 2019, the presentation will feature a work from the artist's ongoing 'Wide Glass' series, begun in 2004. The show marks the 11th solo exhibition of James Turrell organised by Almine Rech since 1989.

Turrell's concept of a 'Tall Glass' or 'Wide Glass' is a unique aperture–rectangular or elliptical, horizontal or vertical–in which the light changes slowly over the course of several hours through the use of translucent materials. In the past, Turrell's 'Tall' and 'Wide Glass' works were realised in neon, but for the last 15 years the artist has turned to LED technologies, which allow for richer hues and a lower light level, offering the artist more freedom as to what shapes, transitions, and colour combinations he can include within the series.

The works in this series are the result of Turrell's research, started in the mid 1960s, on light as a material that affects perception of the human eye. Combined with this is the artist's past 10 years of research on applying computer programming to his work. This technique is an aspect that Turrell developed for light works conceived for buildings, such as the Zug train station in Switzerland or the Peugeot Design Center in France.

'I am dealing with no object...I am dealing with no image, because I want to avoid associative, symbolic thought...I am dealing with no focus or particular place to look. With no object, no image and no focus, what are you looking at?'1 James Turrell's oeuvre and practice perpetually pose such interrogation. One possible response is: we are looking at light. In a dim gallery, a permeating light seizes the experience of seeing from the viewer, blinds, bedazzles and isolates the viewer, and obscures the forms and textures of the objects in the same space. And, 'accidentally' creates a space of perception, a site of spiritual projection. Here, light does not come from a specific source, but seemingly from void, or simply, is light as light. According to François Laruelle, this light is a drive of a certain agency, a force a priori.2 Between materiality and immateriality, the tangible and the intangible, the external and the internal, it creates an ambiguous borderline where things meet and layer upon one another. This is what distinguishes Turrell's art from the self-referential, phenomenological experiences championed by other minimalist artists: no more is here and now; we are already and totally dragged into another world. From his early experiments to the reputed Roden Crater, 'Ganzfeld' and 'Skylight' series, and to the most recent developments, Turrell insists upon granting an unique thingness and volume to light in the form of the borderline, and, through ever-changing colours and architectural integrations, creating formless yet meticulous atmospheres, altering the viewer's fundamental perception of time and space. In this sense, seeing a Turrell is a perception training, not necessarily to train the ability to perceive, but to nurture an alternative perspective through which one can reconsider the world according to the logic of perception.

The 'Tall' & 'Wide Glass' series perfectly demonstrates James Turrell's understanding of the borderline. Here, this is conveyed through the alternative form of 'frame'. In this series, the illuminating frame seems to be detached from the wall, floating, forming a surface that is at once dependent and independent. Because of the presence of light and the ever-changing colours, this surface also resembles a built-in window or channel that opens outward: a screen. Through this light screen, we can clearly discern the layers, fabrics and structures of light, and comprehend the purging and absorbing movements of the illusion created. It is not unlike watching a film: we are placed in a cinema that is dark-cave like; in the first place, we can only passively receive the energy released by the image, as we cannot involve ourselves actively into it, because of the presence of the frame. Gradually, as time passes and as our gaze intensifies, the energy overflows, finally covers and enters into our body. We can at last experience the merging of the surface with perception, when the internalisation is completed. Just as it is the case with many other works by Turrell, this is a process of mediation and exchange, where the immanent spirituality is finally manifested in the form of light. The surface however does not only exist in a cave-like cinema. In some of the artist's architectural projects, such as the Zug train station in Switzerland or the Peugeot Design Center in France, the light screens are installed on the facades and are no longer a surface housed in an enclosed space. Instead, they envelope the surface of the building as enormous covers, camouflage, rendering the buildings invisible in light. We are, therefore, no longer absorbed, but are placed in a theatrical relationship, where the stage and the auditorium are clearly marked. One can realise then the light screen as a configuration of the viewer's immanence can in varied ways establish new subjective-objective links, and bestows upon the act of seeing new, different meanings.

The new work Turrell will debut at Almine Rech Shanghai builds upon his earlier 'Wide Glass' works, further evolving the series on the occasion of his presentation with the gallery. The installation reflects the artist's unique ability to manipulate light and space, transforming the gallery into an immersive environment that engages viewers with the limits and wonder of human perception.

For over half a century, the American artist James Turrell has worked directly with light and space to create artworks that engage viewers with the limits and wonder of human perception. Turrell, an avid pilot who has logged over twelve thousand hours flying, considers the sky as his studio, material and canvas. New Yorker critic Calvin Tompkins writes, 'His work is not about light, or a record of light; it is light–the physical presence of light made manifest in sensory form.'

Informed by his training in perceptual psychology and a childhood fascination with light, Turrell began experimenting with light as a medium in southern California in the mid-1960's. The Pasadena Art Museum mounted a one-man show of his 'Projection Pieces', created with high-intensity projectors and precisely modified spaces, in 1967. 'Mendota Stoppages', a series of light works created and exhibited in his Santa Monica studio, paired 'Projection Pieces' with structural cuts in the building, creating apertures open to the light outside. These investigations aligning and mixing interior and exterior, formed the groundwork for the open sky spaces found in his later 'Skyspace', 'Tunnel' and 'Crater' artworks. 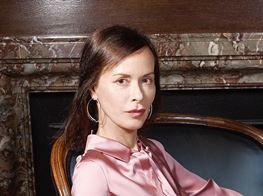 Sign up to be among the first to know when new exhibitions by James Turrell or at Almine Rech open.
Sign UpLogin