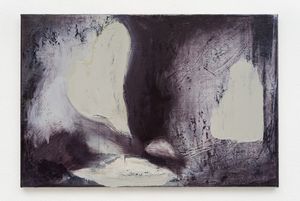 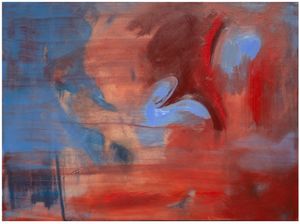 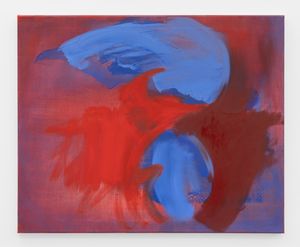 Julia Dubsky's paintings weave a playful web of references to the history of painting and ideas drawn from literature. In a speculative essay 'M/modesty' to be published this Spring, she probes the notion of modesty and its application to the 'feminine'. Her research for this essay coincided with the making of this recent body of paintings focussing on the 'Fig Leaf', modesty's earliest symbol.

The works were made in Wexford, Ireland, and in Dubsky's studio in Berlin. In both locations there was a fig tree nearby, whose leaves she drew over and over. In each space she also kept to hand an image of the painting Infidelity (1570-75) by Paolo Veronese. The work depicts a fig plant growing in front of a drape that is failing to perform its function as a cover for a woman's nakedness (As TJ Clark notes in Heaven on Earth, Veronese would have been aware of the representational irony of painting a fig tree in front of a drape so that its decorativeness acts doubly: both imposed like decoration on the cloth depicted and as a decorative painting on stretched canvas.)

The Fig Leaf and all it might represent is the theme of these paintings; but the sparring colours, the reds and the blues, are their true subject. Layers, stains, marks and gestures create a potential for accident, creating depth and temperature. The reds used are Cadmium Red Light (an opaque, warm bright red), Napthol (very similar when thick, but cold and transparent when thinned), Indian Red (an opaque, matte earth). The blues orient around French Ultramarine Blue (transparent and cold) with Kings Blue (a lighter blue made of the former plus Zink and Titanium white). The various painting implements deployed include palette knives, squeegees, brushes, rags and sanding paper. Dubsky has spoken of the idea of creating wallpaper, recalling an early fascination with Edouard Vuillard's paintings at the National Gallery in London; but also alluding more importantly to her interest in The Yellow Wallpaper by Charlotte Perkins Gillman. The protagonist in this short novel claims a narrative in the abstract patterns and tears in the wallpaper on the walls of the room in which she is trapped – an act that becomes one of resistance against the patriarchal restraints imposed upon her.

Dubsky has spoken about her own reluctance to 'settle' on a style or depiction which is reflected in the titles offered for the paintings. Fig Rabbit Duck (Kaninchen und Ente), for instance, expands Wittgenstein's rabbit-duck illusion to encompass to her own observation of a mark that evolved in the course of the painting so that it could be perceived as any of the three items mentioned in its title. In the diptych Frau als Ferne (woman as distance) Dubsky has come to see 'a raised hand to ask a question or a finger dipping into the wet stuff, to test a doubt.', the title referring to the hidden figure of a woman in Balzac's The Unknown Masterpiece.

'Fictions of Modesty' is the only painting in the exhibition to stray from the binary use of colour; it unashamedly disrupts the rhythm of the exhibition. Titled after Ruth Bernard Yaezell's critical account of the modest heroine in 18th and 19th Century literature, on the cover of which is a painting by James Abbott McNeill Whistler of a woman in a white dress, the raw surface and modest use of colour in this work exudes a powerful sense of discord.

Dubsky cites Yaezell's book as the impetus to write about the concept of modesty (derived from 'modestus', meaning 'keeping within measure'), and especially on the use of the term in 19th Century French painting. 'The incongruity between modesty as something empowering in painting, and something largely disempowering to women, spawns a mixed perversion that such an eagerness should exist in painting for a manner that is opposite in qualities of agency.' The paintings in this exhibition begin with the motif of the Fig Leaf and a modest palette of two colours, but Dubsky's searching treatment of both ironically dispels any sense of reverence or reserve.

Sign up to be among the first to know when new exhibitions by Julia Dubsky or at Amanda Wilkinson Gallery open.
Sign UpLogin