Straatman first appeared in front of the Belgian pavilion at the Venice Biennale in 1988. Ever since, he has been popping up in various places from Antwerp to Tokyo, both announced and by surprise. Leading up to the exhibition at Axel Vervoordt Gallery in September 2017, Straatman turned up in several locations around Antwerp throughout the month of August 2017. During his performances, Straatman lies down, stands, crawls, sits, and stretches. The curious audience passes him by, inspecting the artist who appears as an anonymous white figure mysteriously creating his canvases. 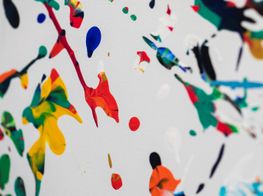 Japanese artist Sadaharu Horio was a member of the Gutai Art Association and is also considered a pioneer of modern Kobe performance art. Life Sadaharu Horio was born in 1939 in Kobe, Japan. Despite wanting to pursue a career in art through

All 500 of Fischer's living juxtapositions are on show at the Marciano Art Foundation in Los Angeles. 'Each juxtaposition is made like any other artwork—sometimes you know why, and sometimes you don't,' he said.