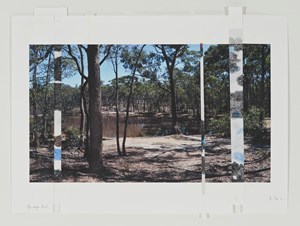 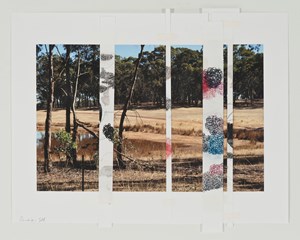 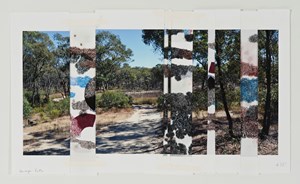 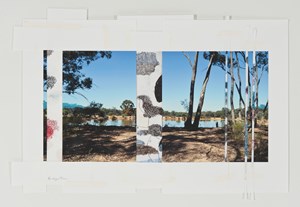 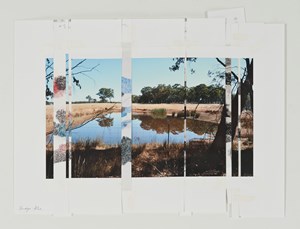 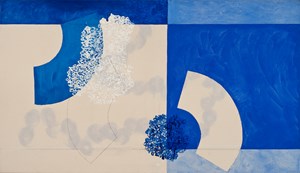 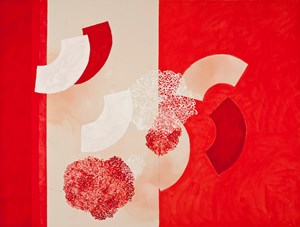 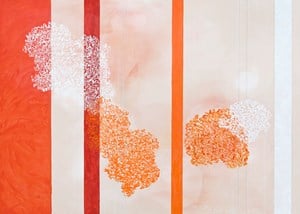 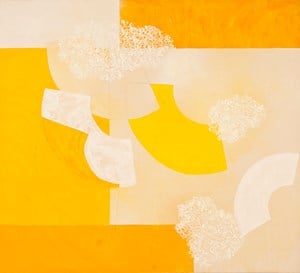 Gallery 9 is pleased to present a solo show by New York based Australian artist Denise Green, her first exhibition at the gallery.

Green’s vibrant paintings are characterised by the interaction of colour, gesture and form on a minimal plane. Her distinctive fan-shaped motifs drift across areas of richly pigmented negative space, interspersed with clusters of calligraphic lines, which allude to flowers, clouds and atmospheric densities. Inviting contemplation for their simplicity and spaciousness, Green has described her paintings as ‘vessels’ that hold ineffable states of emotion.

An interest in translating subjective experience has led to a recent series of collages, presented here alongside her paintings. Green breaks up photographs of specific locations by collaging-in vertical strips of abstract drawing. The objective photograph is both challenged and enhanced by the integration of Green’s ambiguous drawn line. In these works Green presents a phenomenological experience of reality that entwines internal consciousness with the observable view.

Born in Melbourne, Denise Green moved to New York City in 1969 after studying at the École des Beaux Arts, Paris. Further studies under Mark Rothko and Robert Motherwell grounded her approach to painting in the modernist tradition. In 1978, she was curated into two groundbreaking exhibitions, Young American Artists (Solomon R Guggenheim Museum) and New Image Painting (Whitney Museum of American Art), which launched her career in America. Green has been the subject of nine museum retrospectives in the past twenty years, including shows at MoMA PS1 in New York (1999), the Art Gallery of New South Wales (2001) and the Museum Kurhaus Kleve in Germany (2006). Her work is in the collections of the Museum of Modern Art and the Solomon R Guggenheim Museum, New York; the Corcoran Gallery of Art, Washington DC; the Museum of Contemporary Art, Chicago; the Albertina, Vienna; the Museum of Contemporary Art Australia, Sydney; the Art Gallery of New South Wales, Sydney; the UQ Museum, Brisbane; the Heide Museum of Modern Art, Melbourne; and the National Gallery of Australia, Canberra. In 2007 she was awarded the Order of Australia.

Sign up to be among the first to know when new exhibitions by Denise Green or at Gallery 9 open.