Najafov originally trained as a soldier, as well as a professional sportsman – coaching hand-to-hand combat. Inspired by other self-taught artists such as Paul Gauguin and Francis Bacon, it was only in 2003 that he began to experiment with oil paint. In a short span of time, Najafov has been touted to be the next "Francis Bacon" and has since been chosen to represent his country, Azerbaijan, at the 53rd Venice Biennale in 2009.

Najafov is at the forefront of Azerbaijan's Contemporary art scene and his expressive oil paintings and sculptures have been exhibited in prestigious international fairs and exhibitions. With his impressive body of work and growing international recognition, Najafov is an integral part of the burgeoning Azeri art scene. Najafov's artworks have exhibited throughout Europe – London, Paris, Berlin, Moscow, and Geneva. 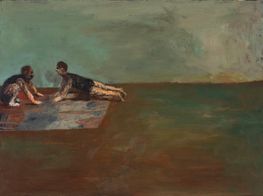 Niyaz Najafov is a self-taught painter and sculptor celebrated for his whimsical, dramatic and psychologically charged works. Having worked as a professional hand-to-hand fighter, a Soviet soldier, and a policeman, it was not until 2003, at the age