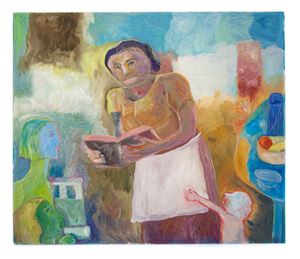 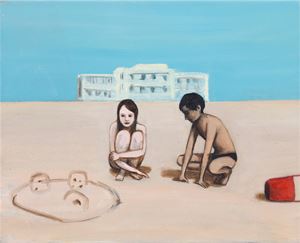 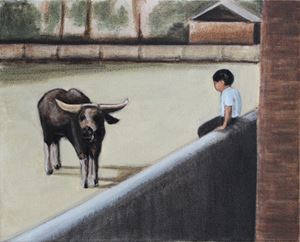 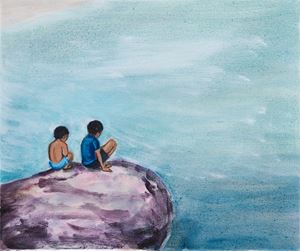 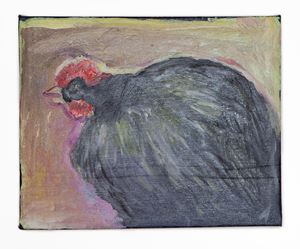 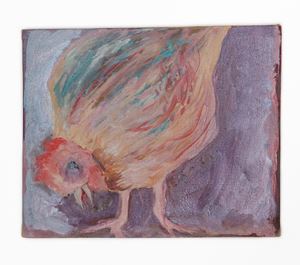 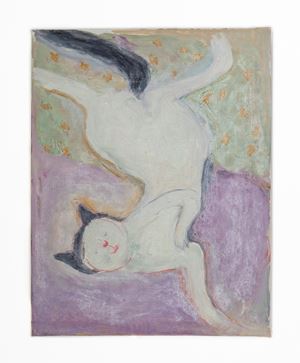 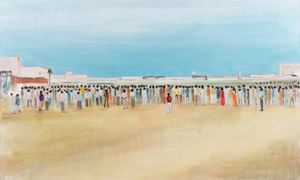 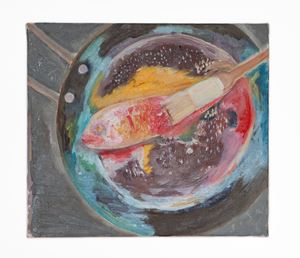 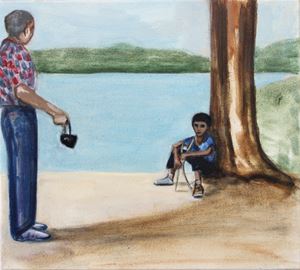 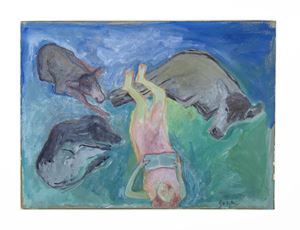 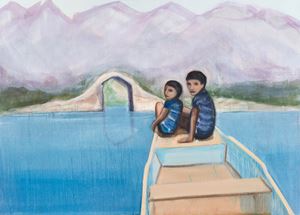 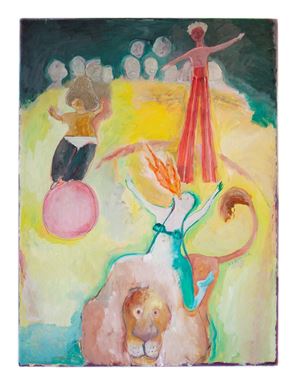 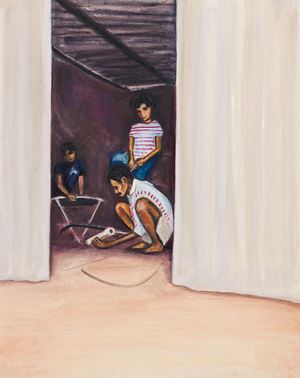 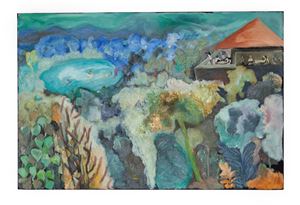 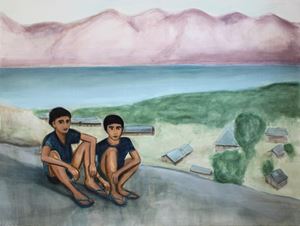 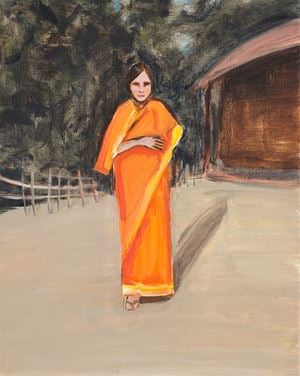 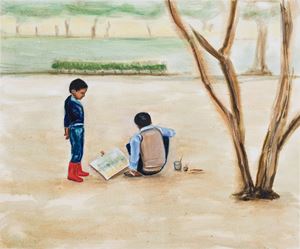 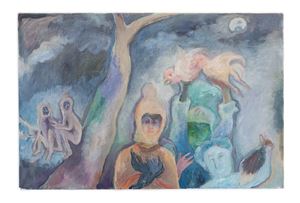 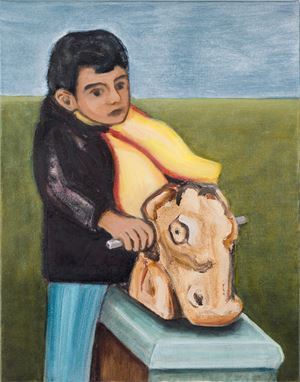 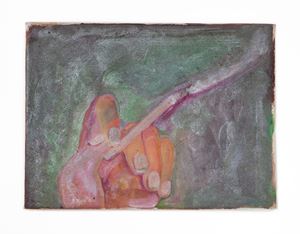 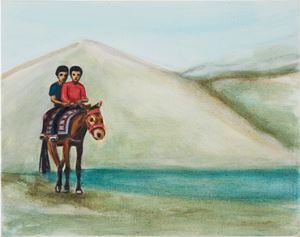 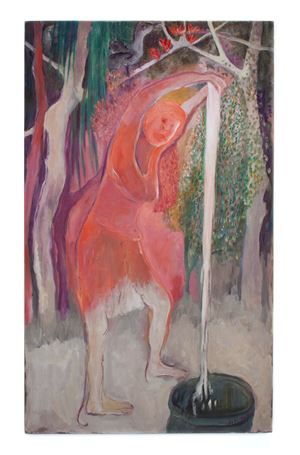 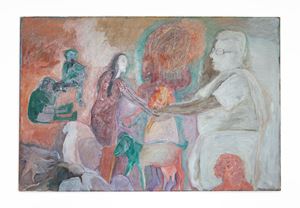 A preoccupation with people, more than their painterly aesthetic, starts an intriguing conversation between Matthew Krishanu and Sosa Joseph. Beyond their shared affinity for broad brushstrokes, translucent layers of colour and washed out hues is their inquisitive nature. With something of an anthropologist's eye, both Krishanu and Joseph createa visual ethnography, capturing habitual routines and profiling their subjects. But where a classical anthropologist would value distanced observation, these artists make emotions their mainstay.

Their strain of potent figuration re-introduces us to the ideas that emanated in post-Independence India with the Bombay Progressive Artists' Group. The group's plural approach and refusal to fit within a canon but to realise their own expressive potential fits with Krishanu's and Joseph's approach. Joseph's works are theatrical and the legacy of her time studying at Baroda with Bhupen Khakhar is apparent. Her paint performs: oil masquerades as watercolour and her subjects are well aware of the performance in which they are embroiled. This is a show which Joseph terms 'figurative expressionism'.Washer Woman, 2019, knows she has an audience and tilts her head to meet it. A hot red wash of colour burns her face and engulfs her body down to her thighs, picking up the shrubbery behind her, creating flickers as if alight. A crow sits atop this isolated blaze squawking in alarm. Yet her legs seem cool and almost icy, frosted in white.

The uncanny scene draws a relationship with female Surrealists Dorothea Tanning and Leonora Carrington. Although based in Joseph's everyday experiences in her hometown Mattancherry, Kerala, the physiology of this place is boundless and the area's particularities are transcended. Animals are crucial to this pseudo-Surrealist enterprise. Their interaction with her figures is at once benign and sinister, as in the work of Carrington. In Lion Tamer and the Acrobats, 2017-2019, the tamer's body fuses with the lion's mane. Caught in Joseph's flattened perspective the lion is nonchalant, its childish depiction much like her series of animal portraits: Casanova the Cat, 2018, satisfyingly splays its legs across Joseph's canvas and the chickens which fall into focus in Brooding 1 and Brooding 2, both 2018, pose with ease.

Her aggrandizing of these birds, forms a parallel with Matthew Krishanu's series of avian portraits, Crow, currently installed at the Institute of International Visual Arts, London. Attracted to their mythological profile, Krishanu diligently observes and treats each crow in the same terms as his figures. The assumed gulf between animal and human does not correlate with Krishanu's or Joseph's perspective; they treat their animal subjects with tenderness, and want to explore their inner worlds. Boy and Buffalo, 2019, is tense: both buffalo and boy are at unease. The child's intrigue and curiosity, a metaphor for Krishanu's own, places him inside an enclosure staring at the animal, the desolate surroundings pointedly absent of any adult influence.

Re-encounters with memories are Krishanu's fuel and this recollection is often void of adult supervision. He represents himself and his brother dwarfed by expansive landscapes. In Boys on a Rock, 2018, these siblings are caught at the threshold of land and water, isolated and exposed. A similar relationship is contrived in Kashmir, 2014, Two Boys on a Horse, 2018, and Mountain Lake, 2019. With his uninhibited bleeds of colour he establishes a nostalgia laced with anxiety—both the boys' and ours.

This contortion of childhood innocence is, in the legacy of art history, unfamiliar. Krishanu emboldens his subjects with mature emotions, an investment which should sit uncomfortably. Beach, 2016, is not a predictably jovial scene redolent of joyous childhood play. The image is bleak, with a boy and girl crouched down in the pale sand, in proximity but unresponsive to each other and disengaged. The girl is huddled into herself, eyes averted from the boy, her face tinged with sadness. The image's clean lines and the evasiveness of his figures are close to Francis Alÿs's paintings. There is a ghostly aura to these forms; they fade and slip from grasp like those in the indeterminate mass comprising Crowd, 2018.

Joseph can build a similarly enigmatic image. Her figures in Poultry Thieves, 2019, dissolve into each other and recede into the cold, faded background. Her ability to twist the ordinary into the eerie and bizarre is instinctive; she effortlessly turns the lush Karnataka landscape into a colourful hallucination in Morning in Coorg, 2019, where dense paintwork dissipates into a loose background of opulent blues and greens. Like the foreground of this scene, her images can feel congested: subjects pile up on each other as in Way Back, 2019, creating a tightness of space which does nothing to compromise the painting's overall serenity.

Krishanu leverages space differently. When adults enter the frame, it is in the spaces left between the figures and around them, where the intrigue is crafted. In Forest Lake, 2019, the distance between the figures is pregnant with trepidation. Characteristically of Krishanu's work, the figures scrutinize each other as much as they invite the viewer's inquisition. In these set ups, he explores the contours of childhood innocence and points to the knowing and awareness of the children he paints. This empathy for his subjects is shared with Joseph, and shown together, their sensitivity is all the more substantive.

Sign up to be among the first to know when new exhibitions by Sosa Joseph, Matthew Krishanu or at Jhaveri Contemporary open.
Sign UpLogin