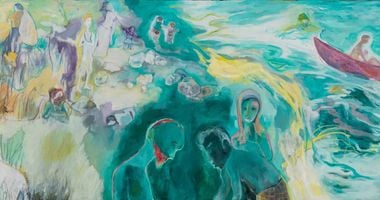 Sosa Joseph is a contemporary Indian artist recognised for her oil paintings of the banal and everyday life as remembered and experienced in her immediate environments.

Joseph studied painting at the Raja Ravi Varma College of Fine Arts, Kerala, and at the Maharaja Sayajirao University of Baroda. Unlike many of her contemporaries, who stayed in Baroda or moved on to Delhi or Mumbai after completing their studies, Joseph returned to Kochi.

Joseph takes as subject matter her memories and observations from her hometown of Parumala and current residence of Kochi, both in Kerala. Joseph's abstracted figures appear engaged in various scenarios and settings, from women chatting at the bazaar to villagers hunting frogs or gathering luffa.

Joseph's paintings bear certain similarities to the works of the Baroda School painters of the 1970s and 1980s—among them Sudhir Patwardhan and Bhupen Khakhar—who developed a style of narrative painting with an inclination towards the urban streetscape and a departure from pictorial realism, replacing it with allegory and a sense of the uncanny.

Although Joseph's paintings are often described as being undersaturated, the artist has worked with a wide range of colours throughout her practice. Warm yellow, green, and red feature regularly in earlier works such as Object Lessons (2) and (3) (both 2009), while Object Lesson (6) (2005) considers the contrast of opaque black and white with nuanced blue, pink, and red.

In a number of paintings from the 2010s, Joseph does appear to favour more muted tones. Other Colours (diptych) (2013), for example, depicts a crowded crossroad, in which figures and the surroundings are rendered in pale browns, greys, and browns, as well as shades of faint pink, yellow, and white. Josephs' concern with the atmospheric possibilities of different colour combinations, however, are also visible, in the artist's substitution of naturalistic colours to achieve an overall harmony in the painting.

Women's relationship with patriarchy is a recurrent theme in Joseph's paintings, in which they often appear resting indoors or dressed in niqabs in street and bazaar scenes. A sense of stillness permeates the gathering or procession of women in 'What Are We?' (2012), a three-part painting series that derived from the artist's interest in women's lives.

Bodies of water, aquatic animals, and water-related activities have also long been frequent subjects of Joseph's oeuvre, from the casting of a net over the fish in the watercolour Limits of Understanding I (2009) to the collection of riverside scenes in oil on canvas Gift From the River I (2021).

In an artist's statement from December 2021, Joseph writes that River Pamba—near which she grew up—raised her, fueling her imagination and understanding of life. Where do we come from?, her solo exhibition at Mumbai's Galerie Mirchandani + Steinruecke in 2022, presented recent paintings revolving around the river and its ecosystem.

Joseph has borrowed the title of Paul Gauguin's 1897 Where Do We Come From? What Are We? Where Are We Going? for her painting series 'What Are We?' (2012), painting Where Are We Going (2015), and the exhibition Where do we come from? (2022), among others. Unlike Gauguin and his spiritual quests, Joseph's adoption of the title is personal—the question in the exhibition title 'Where do we come from?', for instance, is 'an exploration of who I am' as she said in her interview with John Mathew.

Joseph has shown her works in solo and group presentations at galleries and international art fairs.

Sosa Joseph's latest paintings on view at Galerie Mirchandani + Steinruecke trace the origins of life back to the river.

Be among the first to know when new artworks and exhibitions by Sosa Joseph are added to Ocula.
Sign Up Login