Imaginary Bones has been extended and will now consist of a 2-part display. Currently on view, Part I has been extended to 14 November. Part II will open on 20 November with an offering of new works and will continue on view through 18 December.

Up until now, much of technology has centred around human intent and its ability to fulfil anthropocentric values. Today, technology continues to grow and, in part, eclipse human intent. To Kishi, the value of Artificial Intelligence (AI) lies, not in their instrumentality, but in their autonomy. Rather, through their independent world view, Kishi recognises AI as a cooperative entity, of a unique intellect and ability to uniquely render history, images, and other forms of human creation.

Bones give bodies structure and form. Simultaneously, they are one of the earliest tools used by mankind. If civilisation began when bones began to be utilised, then perhaps bones should be viewed as tools worthy of commemoration. In Imaginary Bones, Kishi reinterprets the concept of bones through an AI perspective and presents a world of shapes and rules, independent of ours.

In this examination of our existing civilisation through its primal origins, Kishi unravels how accelerated development reveals a situation whereby human-made systems have begun to disintegrate from the core.

Kishi considers AI not as something that imitates people, but as an alien intelligence from another dimension. By installing this intelligence into his own body and lending it as a substitute, Kishi creates works in which the digital intelligence and the analog body are always placed in a parallel relationship.

In his works, he often borrows motifs from past art history, which are distortedly combined with technology to evoke a sense of momentary dislocation in the viewer's awareness of the self and the world that exists in the here and now.

His work has been featured in NIKE and VOGUE, and he is active in a variety of fields.

Tuesday to Saturday, 11am to 7pm
Closed Sundays and Mondays
(Open on Public holidays) 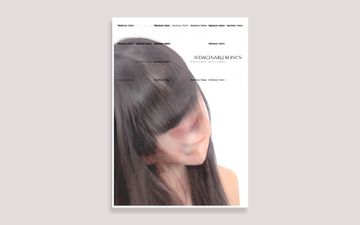