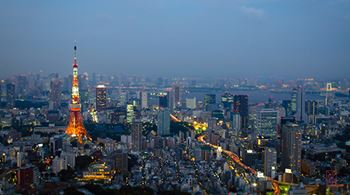 Scattered around the metropolitan area are Tokyo's notable galleries and art museums, from Nanzuka in the busy Shibuya special ward, Blum & Poe in the lively Harajuku district, and the Museum of Contemporary Art Tokyo in Kiba Park, to Yumiko Chiba Associates and Yayoi Kusama Museum in Shinjuku.

The districts of Tokyo are well-known for their clusters of independent and commercial art gallery spaces. In Roppongi, the Piramide Building is home to several leading galleries such as Ota Fine Arts, Perrotin, Wako Works of Art, and Yutaka Kikutake Gallery. Nearby, a triad of influential art galleries consisting of Taka Ishii Gallery, Tomio Koyama Gallery, and ShugoArts is located within the Complex 665 building, first opened to the public in 2016. A few blocks down the road, Taka Ishii Gallery Photography / Film is housed on the second floor of the Axis building.

Roppongi, along with the neighbouring districts of Azabu-juban, Hirō, and Akasaka, is largely known as a popular nightlife district. Developments of Roppongi Hills and Tokyo Midtown have reconsidered the reputation of the area as a cultural centre as well. Three of the biggest museums of the area are collectively known as the 'Art Triangle Roppongi' or ATORO (アトロ) and consists of the Mori Art Museum, Suntory Museum of Art, and The National Art Center.

Located in the Roppongi Hills Mori Tower, which stands at 238 metres—one of the tallest buildings in the city—is the Mori Art Museum, immediately below the top observation deck. The Mori Art Museum is well acclaimed internationally for hosting outstanding contemporary art exhibitions with a focus on new artistic ideas. Louise Bourgeois' bronze-cast sculpture, titled Maman (1999), is installed in the 66 Plaza of Roppongi Hills, right in front of Mori Tower.

The Hara Art Museum and More

Not far from the Complex, the Hara Museum of Contemporary Art is located in the nearby residential area of Shinagawa. Designed in a Bauhaus style by renowned Japanese architect, Jin Watanabe, the building was originally built as a private residence of the Meiji-era industrialist Kunizo Hara. The museum is home to a permanent collection of contemporary artworks by Alexander Calder, Yasumasa Morimura, Mark Rothko, Cindy Sherman, Hiroshi Sugimoto, and Lee Ufan among many others. Even though it was one of the of the first museums in Japan dedicated to contemporary art, the museum is set to be closed down at the end of 2020.

With an astounding selection of museums, commercial galleries, and artist-run spaces spreads all around the ever-changing and vast city, Tokyo is both exhilarating and challenging to explore.