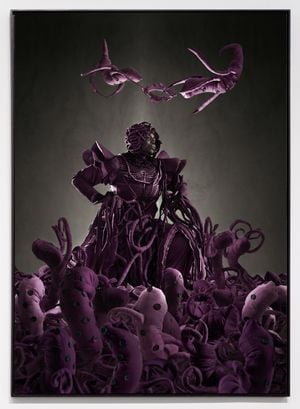 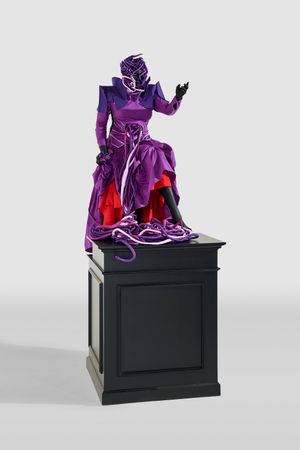 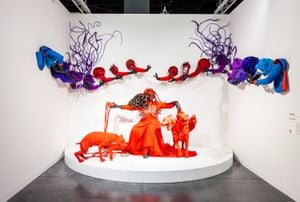 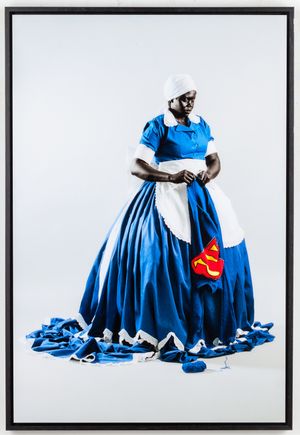 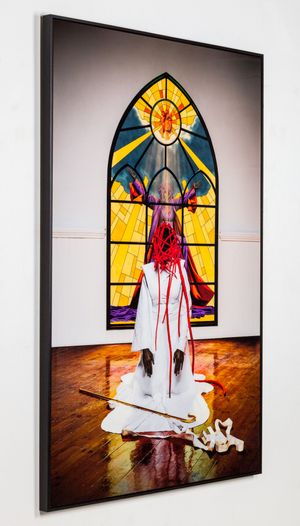 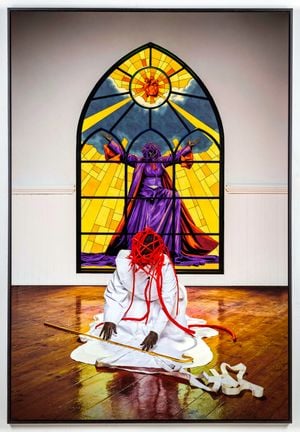 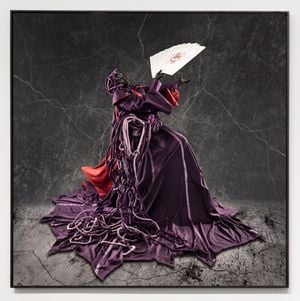 Unhand Me, Demon! brings together for the first time in the United States 13 years of work by renowned South African artist Mary Sibande. Inaugurating Kavi Gupta's new street-level space at 835 W. Washington Blvd. in Chicago, the exhibition examines a crucial question of our time: How do we shed negative energies and move forward when we find ourselves at a crossroads in life?

The impetus for the name of the show, Sibande says, was the legend of blues singer Robert Johnson, who allegedly mysteriously transformed in a matter of weeks from someone with almost no ability into one of the greatest blues guitarists of all time. People claimed Johnson made a deal with the Devil, selling his soul for talent at the crossroads of Highways 49 and 61 in Mississippi. Modern research reveals the true source of Johnson's transformation was hard work under the tutelage of blues guitarist Isaiah 'Ike' Zimmerman, who gave Johnson lessons in a cemetery late at night, where they would not be bothered.

'Crossroads are about cutting away the old life for something new,' says Sibande. 'The demon for me, if I were to translate it from my home language, would be bad energies, or a thing that's holding you, or pulling you back. This show is about letting go, a preparation for going forward. As an individual, one has to shed some things like a snake.'

Like the Robert Johnson story, Sibande's oeuvre is rooted in a space where intelligent effort intersects with, and is sometimes confused with, magical thinking. The work centres a character named Sophie, whom Sibande describes as her alter ego or avatar. Sophie's mythology is an autobiographical representation of chapters in Sibande's life, as she witnesses and participates in the evolving social, political, and cultural roles of Black women in the aftermath of Apartheid in South Africa.

Placing Sophie within different narratives and contexts, coded through colour, Sibande mobilizes photography, sculpture, and installation to explore issues of domestic labour (the Blue Phase), protest and revolution (the Purple Phase), and, in her latest body of work, issues of blood, anger, and empowerment (the Red Phase).

They Don't Make Them Like They Used To (2008) finds Sophie dressed in the traditional blue and white outfit of a South African domestic worker, adorned on the front with the logo of Superman.

Admiration of the Purple Figure (2013) and A Terrible Beauty is Born (2013) show Sophie dressed elegantly in a flowing purple dress, surrounded by throngs of embryo-like purple creatures—a reference to the Purple Rain Protests in South Africa, and the subsequent birthing of a new generation of civil rights activists.

Right Now! (2015), Ascension of the Purple Figure (2016), and Wielding the Collision of the Past, Present, and Future (2017) bear witness as Sophie moves from protest into empowerment; while The Domba Dance (2019) shows Sophie arriving fully in the Red Phase, unleashing dogs of war. Sophie's most recent transformation is further expressed in two images titled To everything there is a season (2019) and Turn, turn, turn, turn (2019), which attest to a spiritual cleansing.

Together, the works in Unhand Me, Demon! offer a broad overview of the evolution of Sibande's studio practice up to this point. The show also lays the groundwork for what Sibande says will be the next crossroads, as her avatar Sophie moves into the Green Phase, suggestive of rebirth. 'It's time to hit the restart button,' Sibande says.

Sign up to be among the first to know when new exhibitions by Mary Sibande or at Kavi Gupta open.
Sign Up