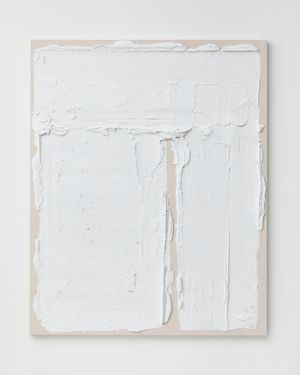 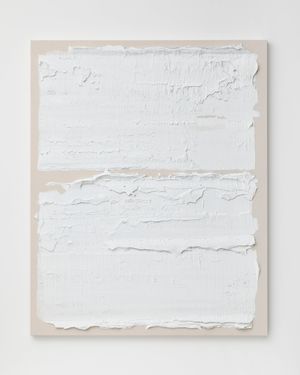 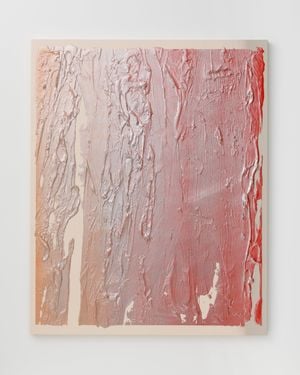 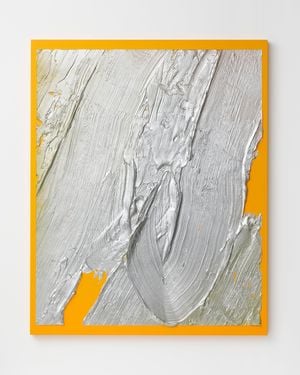 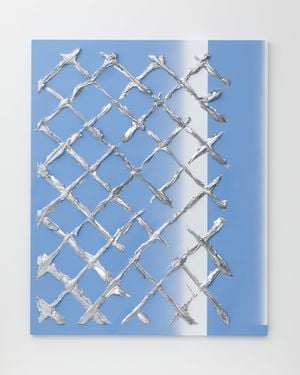 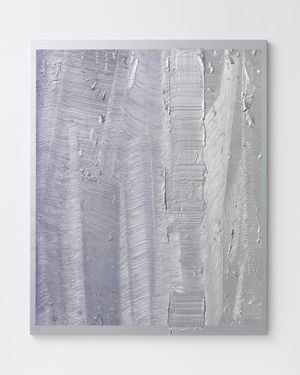 KOSAKU KANECHIKA is pleased to present Yutaka Aoki's solo exhibition Treading Along the Window, on view from 5 June to 10 July 2021.

Yutaka Aoki expands the scope of painting through an examination of the relationship between painting and the surrounding world, and of the many possibilities that are born from that exchange. This exploration results in works that oscillate between two- and three-dimensionality, and in works that respond not only to material and production process, but to their relationship with the audience's gaze. In Aoki's 2020 solo exhibition INTO THE AIR, the artist sought to capture the ever-changing expressions of paintings, articulated as single moments along the axis of time. By repeated experimentation and the application of newly discovered processes, Yutaka Aoki is continually rediscovering the painting itself.

The key concept to this exhibition – Aoki's fourth at KOSAKU KANECHIKA – is the 'window.' Windows are not only apertures that allow one to view out of an enclosed space; they are also portals for exposing what is confined within its walls. Symbolising a link between matter and spirit as well as between environment and people, Aoki endeavours to manifest the window-like element of paintings, and contributes the following statement –

Windows communicate countless messages. As if an intermediary between the viewer and the environment, windows introduce to us snippets of the world. These snippets, as phenomena, become the boundary of consciousness behind our eyelids. In this exhibition, I explore the relationship between knowledge and blindness.

José Saramago's novel, Blindness* illustrates a world in which humans attempt to navigate their environment through four of their five senses. In the novel, the world seen by humans becomes a flat, featureless, white space. In contrast, the humans, as seen from the world, are depicted as frayed, disheveled creatures.

Ordinarily, humans understand the world through the medium of light. As animate beings, we simply take in the information given to us by our environment, yet in Saramago's novel, the loss of light reverses the relationship between the being and the environment as provider of information. Deprived of light, the individuals in the novel attempt to sculpt their environment out of nothingness, in order to assure themselves of the certainty of their own knowledge. The world becomes even more frayed.

Aoki's unshifting gaze on light and its three-dimensional qualities is central to his creative process. Supplemented by transformations engendered by specific elements in the environment, including the passage of time, the presence of viewers and the nature of the exhibition space, the organic richness of light is the focal point of his artistic pursuit. Within his statement, the artist refers to a world in which light has been lost. In a world where light is not guaranteed, the story's illustration of humans as creatures attempting to comprehend their environment from within their blindness appears to suggest that the uncertainties of today began long ago.

A ray of sunlight takes approximately eight minutes to reach the surface of our planet. Aoki states that in that sense, light exists in the future. The present exists atop of time and the sedimentary surfaces of Earth's crust, which are illuminated by the sunlight. Existing in this same present, what can we, the viewers, discover through these paintings as windows to the world?

Treading Along the Window

Sign up to be among the first to know when new exhibitions by Yutaka Aoki or at KOSAKU KANECHIKA open.
Sign Up
}