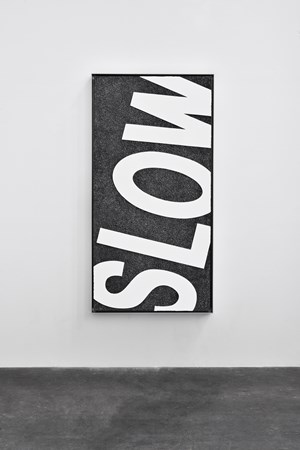 Kukje Gallery is pleased to announce Adaptations, an exhibition by the artist duo Elmgreen & Dragset on view from March 21 to April 28, 2019. Their first exhibition since joining the gallery, the ambitious presentation will be comprised of approximately 20 new works spanning both K3 and the ground level of K2.

Entering K3, the visitor is faced with elements that are familiar from the public sphere. Dispersed around the room is a series of sculptures—Adaptations (2018-2019)—that take the form of street signs in standardised shapes commonly seen all over the world. But none of the signs display any symbols, colours, or markings—they are all made in stainless steel and mirror polished, so they reflect the space around them and the people within it. Rather than announce themselves with the urgency and high visibility that street signs normally do, they seem to camouflage themselves by adapting to the surroundings. Instead of giving instructions and directions, they function as an open form ready to negotiate and absorb new ideas.

In the same space, asphalt—the most basic material on which we commonly walk or drive—has been used in a series of works entitled Highway Paintings (2019). Elmgreen & Dragset use rectangular pieces of asphalt as a ground and the paint normally used for painting road markings, creating paintings that are formally reminiscent of Minimalist geometric abstractions, but that clearly also refer to a shared urban language. Again, like with the street signs, this language is subverted and turned into signifiers that point to both the familiar and the subconscious. Each asphalt painting is framed in a custom-made steel frame—a nod to Minimalism's fascination with industrial aesthetics and a further blurring of the division between traditionally high- and low-end materials, and of private and public material realities. Traffic rules and street markings are one of the few truly global languages, here personalised and altered by the artists to generate new meanings and aesthetics.

Whereas the works in K3 focus on structures meant to control, direct, or navigate our moving bodies through public space, the works in K2 focus on the human body itself, from abstract to semi-abstract to figurative representations of the body including some of its intimate spheres. The audience is first met by a giant version of a human tailbone titled Tailbone (2019), an organic form that bears some resemblance to certain high modernist works by artists such as Barbara Hepworth and Jean Arp, but that also shows an affinity with the fluidity of Zaha Hadid's architectural structures. The tailbone does not change its appearance according to race or gender and reminds us that we all come from the animal kingdom.

Two male torsos titled The Influence, Fig. 1 and Fig. 2 (both 2019), not unlike the remains of Greco-Roman sculptures found in ruins and lacking limbs, are each displayed on a pedestal. Here, the torso has been purposefully sculpted as a fragment, with visible marks from another man's hands imprinted on its waist, leaving it ambiguous as to whether the hands performed an act of violence or love. In line with the Roman tradition, which often saw many versions of the same sculpture produced over and over again (dubbed 'serial classic' by the Italian curator Salvatore Settis), a matte white version and a polished aluminum version are shown opposite one another at each end of the room, on two different plinths. At certain intervals, the torsos change place, carried by two male performers, extending the inquiry into the objectification of art, history, labour, sexuality, and the body.

Another fragment of the human body can be seen in Doubt (2019), a floating hand with an outstretched finger inserted inside one of the many holes torn into a human-sized, mirror-polished stainless steel plate. The work, which references the gesture in Caravaggio's The Incredulity of Saint Thomas as well as Lucio Fontana's punctured metal works, evokes a sense of alienation from one's corporeal and spiritual self; here the traditional depiction of Christ's lacerated body is exchanged with a contemporary material, the metal plate, which also acts as a mirror.

In other works, Elmgreen & Dragset discuss our bodily relation to the physical materials and cultural frameworks that surround us every day. Multiple Me (2019) consists of several circular vanity mirrors attached to a rectangular structure. This passageway, which cannot be traversed, generates multiple partial reflections of gallery visitors, creating an extreme rendition of today's selfie craze and consequently signifying a contemporary rite of passage. The material of this mirror-clad passageway, white Corian, is echoed in an adjacent circular bar counter, Looped Bar (2019), which is the most recent in Elmgreen & Dragset's series of inverted bars of different shapes and sizes. With its beer taps pointing outwards and its bar stools inaccessible and trapped inside the looped counter, the bar has become dysfunctional and addresses questions about inclusion versus exclusion.

With The Observer (Kappa) (2019), the artists shift viewing perspective and display a realistic figure in the midst of the exhibition's otherwise semi-abstract language. This work shows the human body in its entirety: the lone figure of a shirtless man dressed in track suit pants casually leans over the railing of a balcony, his sleepy gaze fixed somewhere below. As an architectural feature, the balcony transgresses boundaries, being at once public and private, and the work captures an everyday moment in this borderline space where the protagonist is frozen in contemplation. 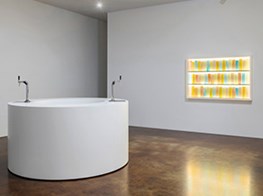 There's a nice-looking bar at Elmgreen & Dragset's new show, Adaptations, at the Kukje Gallery in Seoul, South Korea. It's white, oval shaped, and is fitted with two bar taps, and looks pretty inviting...

Sign up to be among the first to know when new exhibitions by Elmgreen & Dragset or at Kukje Gallery open.