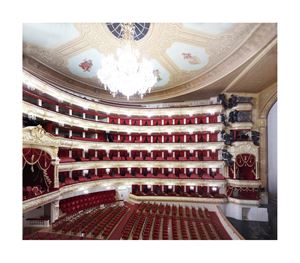 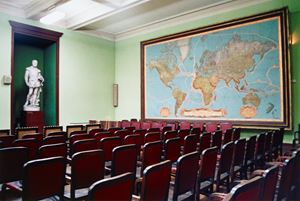 Place and time can be captured. This is what an image can do for us. But before capturing comes experience.– Candida Höfer

Kukje Gallery is pleased to present Candida Höfer, a solo exhibition of the internationally celebrated artist on view at Kukje Gallery Busan from 18 September through 8 November, 2020. The exhibition will be Höfer's fifth solo presentation with the gallery following Spaces of Enlightenment in 2018 and marks the artist's first solo show in Busan. Over the course of her distinguished career, Höfer has photographed the interiors of many of the world's most culturally significant public spaces with a keen focus on libraries, theaters, and museums. The eponymous show will present an incisively curated group of old and new works offering insight into the artist's extensive practice and showcasing her skill in capturing not only the visual, but also the historical richness of her subjects.

The works featured in the show depict a range of locations shot beginning in the 1980s through 2017. Despite this wide variety, they all resonate with the universal concept of time or more importantly, the passing of time. Although the photographs capture a specific moment, they allow us to reflect on the passage of time as each space in Höfer's photography bears its own history and reflects those changes in subtle ways. Installed as a triptych, Muzei sovremennogo iskusstva "Garaj" Moskwa VI, VII & VIII (2017) portrays the interior of the Garage Museum of Contemporary Art in Moscow, housed in a building that was constructed on the dilapidated frames of the famous Soviet Modernist restaurant Vremena Goda (Seasons of the Year), initially built in 1968. The work captures the structural and temporal contrast between the newly constructed staircases against the old brickwork preserved from the original building, simultaneously revealing the bygone vestiges and present state of the architecture. Another work from Moscow, Dom Melnikova Moskwa VIII (2017), depicts the Melnikov House, one of the most well-preserved works by the visionary architect Konstantin Melnikov. Constructed between 1927 and 1929 and regarded as an avant-garde masterpiece, the Melnikov House was the lifelong home of the architect. Photographed in 2017, the preserved interior remains seemingly frozen in the 1920s, but the glass windows offer glimpses of the contemporary era, drastically different from the times of the building's foundation.

Other images depict cultural institutions that chronicle time with their dedication to the preservation of history. La Salle Labrouste - La Bibliothèque de l'INHA Paris II (2017) portrays the reading room inside the library of the National Institute for Art History, following extensive renovations between 2010 and 2017. Elbphilharmonie Hamburg Jacques Herzog und Pierre de Meuron Kabinett Basel XI (2016) documents the scale model of the Elbphilharmonie Hamburg, on view at the Jacques Herzog und Pierre de Meuron Kabinett, a foundation established to archive and safeguard the works of the renowned architecture firm. The artist has also photographed the interior of the Elbphilharmonie Hamburg, which was introduced in her previous solo exhibition with Kukje Gallery in 2018. By documenting the original miniature model of the building, it is important to note Höfer's hybrid perspectives on contemporary architecture that extends beyond her enduring interest in historical spaces.

Throughout her career, Höfer has been invited by notable institutions to capture how layers of time interweave with the rich history of their spaces. The exhibition presents works from Höfer's many notable collaborations, such as with the State Hermitage Museum in Saint Petersburg and the Musée du Louvre in Paris. Created during her collaboration with the State Hermitage Museum, Bolshoi Teatr Moskwa II (2017) embodies the grandeur of Moscow's iconic theater, with its ornate structure and sumptuous colors. Another image captures a rare moment at the Musée du Louvre: an empty room with rows of chairs, our eyes drawn towards the art historical masterpiece—the Mona Lisa—in the back. These two aforementioned institutions have held solo exhibitions of Höfer in 2015 and 2006 respectively; the artist's time and experience in each of these places come into dialogue with their symbolic history, effectively elevating the contextual richness of her works.

Candida Höfer is internationally renowned for her distinctive compositions and technical virtuosity, receiving much critical acclaim for pushing the boundaries of contemporary photography. Her compositions often capture the subject directly and from the front, in a straightforward and balanced orientation. She works solely with natural light and artificial lighting already within the space and does not resort to utilizing additional lighting equipment or retouching. The artist's practice begins with lengthy preliminary work in "setting the scene" prior to the shoot. During this time, the artist prepares the space and carefully deliberates on the lighting and different perspectives; this is an essential part of her practice because of the often limited time allocated for actual photography. Following the shoot, the artist oversees a comprehensive selection and printing process before finalizing a work. Most of Höfer's photographs are notably void of human presence, inviting viewers to focus on the spaces. Though visually absent, human presence undoubtedly remains, as the subjects themselves are reminders of vivid human activity.

Most of Höfer's works from the past two decades were taken utilizing a tripod, in large or medium format that results in her iconic large-scale prints. However, many of her early works were taken on a compact, handheld camera and more recently, the artist has returned to using the handheld camera on occasion. The exhibition offers a rare opportunity to view these intimate works that deviate from her conventional large-scale photographs in composition and production, displaying results of the artist's strikingly discrete approach that is founded upon a more liberal encounter with space. As the artist elaborates:

Those works also form a cycle: Ethnographisches Museum Lissabon I (1989) and Folds (2016) and Tables (2016) have all been photographed with a hand[held] camera. The hand camera then was an obvious tool before being initiated to the more complex machinery of photography. The hand camera now provides me with the opportunity of an occasional return to a more spontaneous reaction to what catches my gaze, even if the work involved in making an image does not differ much from the work demanded by the larger images.– Candida Höfer

In juxtaposing these old and new images, the exhibition allows viewers to reflect on the passage of time for not only the spaces, but also for the artist. Höfer's multifaceted portrayal of space infuses social roles and historical context along with the distillation of a passage of time unbeknownst to the viewer, extending beyond determining the era or period during which the space was constructed. Her documentation confronts the historical layers that form certain features of a space and indicates how it exists in present times after all these years. For Höfer, photography is an ideal medium that allows her to directly experience and engage with the abstract dimensions of space and time which constitute her work.

Born in 1944 in Eberswalde, Germany, Candida Höfer attended the Kunstakademie Düsseldorf between 1972 to 1983, initially studying film with Ole John and later photography under the tutelage of Bernd and Hilla Becher. She has held numerous solo exhibitions at institutions worldwide, including Museo Amparo, Puebla (2018); State Hermitage Museum, Saint Petersburg (2015); Musée du Louvre, Paris (2006); Kunsthalle Basel (1999); and Kunsthalle Bern (1993). Her works have also been presented in group exhibitions at notable institutions such as Museum Ludwig, Cologne (2018, 2016, 2014, 2013, 2012, 2007, 1993); the Museum of Modern Art, New York (2013); Guggenheim Museum, Bilbao (2003); Kunsthaus Bregenz (1999) and more. Höfer participated in dOCUMENTA 11 (2002) in Kassel and represented Germany at the 50th Venice Biennale (2003) with Martin Kippenberger. In 2018, she was recognized for her outstanding contribution to photography at the Sony World Photography Awards. Her works can be found in major public and private collections around the world. Höfer currently lives and works in Cologne, Germany.

Sign up to be among the first to know when new exhibitions by Candida Höfer or at Kukje Gallery open.
Sign UpLogin