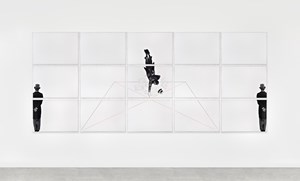 Galerie Marian Goodman Paris is delighted to be showing the latest work by Giulio Paolini. Designed as a carefully planned mise-en-scène, the exhibition brings together a set of mural works, three-dimensional installations and limited editions expressing the artist’s aesthetic and ideas about art and its representation, the figure of the artist, and the gaze of the beholder.

For Giulio Paolini, if art is 'a secret itinerary, devoid of destination, place or date,' then the 'act of exhibition' is that moment when the works assembled constitute a visual narrative, one that the artist himself is invited to follow as well as visitors. Comprising an almost unchanging variation of materials (photographs, plaster casts, drawing paper, Plexiglas, objects), his works dialogue with Time and History. Each one possesses a complex structure that includes references to art history or literature, forming a coherent and polysemous whole constructed out of a set of fragments. It is by attentive observation of each detail, signified or signifying, that we can gain a reading of the complete composition, going well beyond what was initially visible.

In the exhibition synopsis Paolini notes: 'A single figure, in formal attire, takes on three different roles. At first he is intent upon observing the back of a painting, which reveals to him the "truth" of what is hidden from sight: A Yellow Rose takes possession of his visual field and excludes any other view. The same figure then finds himself exhibiting a "game" of surfaces that allow him to hide his own image via the simulation of geometric and linear motifs. He eventually falls straight down into the void, to the intersecting diagonal lines that determine the Disegno geometrico of his "free fall."' The man wearing tails occupying the spaces structured by three large polyptychs presented on the ground floor of the gallery is a stand-in for the artist.

Retroscena (Una rosa amarilla) [Backstage ('A Yellow Rose'] describes a moment frozen in time when, sitting in an armchair and seen from behind, the character contemplates a painting that is hung back to front. Now he is visited by a revelation which is represented by the yellow rose in the foreground. The flower, a metonym of a short text by Jorge Luis Borges that Paolini loves, symbolises the 'truth' that is suddenly manifested to the creator, like the one experienced by Borges’ poet character when at death’s door. This revelation, linked to the vision of a thing that has already been observed but here he seems to be seeing for the first time, is concomitant with the awareness that no work can ever be a faithful reflection of reality.

In L'arte di non esserci [The Art of Not Being There] the person opposite us, his face hidden by bouquet of loose sheets, symbolises the anonymous artist, the 'irreplaceable and yet invisible subject,' who disappears behind his works. Finally, in Caduta libera (Suicida felice) [Freefall. (Happy Suicide)] the artist becomes an acrobat, throwing himself into the void before our eyes and before those of his immobile doubles, posted on either side. The stage space drawn in perspective is a direct reference to Disegno geometrico, the first work made by Paolini in 1960, consisting of lines drawn in ink on a white canvas covered in tempera.

On the ground floor, in the very centre of the room, Scomposizione [Decomposition] 2018–2019, questions the presence and visibility of an image. The photographic reproduction of an Old Master drawing is redoubled, appearing in the form of paper fragments laid out on the floor, but also in the ribbon tying together the four little Plexiglas columns that delimit the area of the artwork. The 'hidden' image echoes the ideal of beauty, an image that we can see but never fully identify.

On the gallery’s lower floor, the artist continues: 'Two other figures inhabit the exhibition space. Two naked bodies, one of which has fallen to the ground, the other stretching upwards, both suspended in a dizzying flight (the void), are actors whose task is to personify the parallel destinies of two characters: Icarus and Ganymede, the end and the beginning of an idea of Beauty, of the same nameless figure.' In volo (Icaro e Ganimede) [In Flight (Icarus and Ganymede)], 2019, comprises multiple elements, including a plaster cast of the Ganymede by Benvenuto Cellini, here without its traditional attributes (the eagle and bunch of grapes), but holding in one hand two wings in gold card stock. On the floor, a partial reproduction of the Icarus painted by the Flemish artist Jacob Peter Gowy sits beside a broken-up map of the sky, a stellar globe and a Wood’s lamp. The figures from Greek mythology, Ganymede, the icon of beauty chosen by Zeus and abducted to the summit of Mount Olympus, and Icarus, whose famous wax wings melted under the sun and caused his fatal fall, are two allegories of the ideal of beauty, which is inevitably elusive. Ganymede is also the name of one of the planets orbiting around Jupiter, and the biggest natural satellite in the Solar System.

Writing has always been part of Paolini’s practice, and the Librairie Marian Goodman is the ideal showcase for two of his new printed works: Raymond Queneau Cinque esercizi di stile, a signed, limited edition artist’s book which pays homage to the Exercises de style published in 1947, and Promemoria [Reminder], comprising nine illustrated plates, each with a text written by Paolini. Each image represents an interior view of the Castello di Rivoli. Onto these photographic collages freely transpose nine figures (Fernando Pessoa, Italo Calvino, Salvador Dalì, Marcel Duchamp etc.), like nine imaginary apparitions that have come to visit the former residence of the Court of Savoy, which was transformed into a museum in 1984.

Born in Genoa in 1940, Giulio Paolini lives and works in Turin. He made his first 'painting', Disegno geometrico, in 1960 and had his first solo exhibition in Italy in 1964. In the mid–1960s he became associated with the Italian artists of the Arte Povera movement and took part in numerous group shows. He has also had solo shows in major international institutions such as the Museo Poldi Pezzoli in Milan (2016), the Center for Italian Modern Art (CIMA) in New York (2016), the Whitechapel Gallery in London (2014), the MACRO (Museo d’Arte Contemporanea) in Rome (2013), the Kunstmuseum Winterthur (2005), MAMCO in Geneva (1999), the Fundação C. Gulbenkian in Lisbon (1995), the Stedelijk Museum Amsterdam (1980). In France he was invited by the Nouveau Musée de Villeurbanne in 1984. A major retrospective, Del bello ideale. Giulio Paolini, has just ended at the Fondazione Carriero in Milan (26 October 2018–10 February 2019). From 2 March to 10 June 2019 the Collection Lambert is presenting Le Lacrime Dei Poeti, an exhibition of sculptures by Francesco Vezzoli in dialogue with works by Paolini, Louise Lawler and Cy Twombly.

Sign up to be among the first to know when new exhibitions by Giulio Paolini or at Galerie Marian Goodman open.