Mazzoleni London is proud to present Hans Hartung and Art Informel, which will open to the public on the 1 October 2019 and continue until the 18 January 2020. Collating artworks from four decades, the London exhibition will focus on a selection of Hartung's paintings shown in context with early post-war works by some of the most important artists within the Art Informel movement of the 20th century. A further solo exhibition of Hans Hartung's work will open to the public at the Turin gallery on 25 October 2019 until 18 January 2020, a continuation of the gallery's interest in the artist, since presenting selected works by Hans Hartung in 2004. The exhibitions will mark the 30th anniversary of the artist's death.

Hans Hartung is a renowned figure within Art Informel movement and of gestural abstract painting. The London exhibition will examine the origins of Hartung's work and investigate the discourse between the diverse circle of artists present in Paris during the 50s and 60s. Works by artists such as Giuseppe Capogrossi; Hisao Domoto; Jean Fautrier; Toshimitsu Imai; Henri Michaux; Georges Mathieu; Serge Poliakoff; Jean-Paul Riopelle; Gérard Schneider; Pierre Soulages; Wols and Zao Wou-Ki, will be presented with the aim to elucidate the artistic relationships which embraced tachisme and lyrical abstraction. The main section of the display will focus on works by Hartung from the 50s, 60s, 70s and 80s, moreover, will track the evolution of his particular visual language to reveal an artist who was continually striving for the unfamiliar and the original.

Experimenting with rapid movement, Hartung used 'grattage', a technique where freshly applied paint is removed by scraping in order to create dynamic works with intense marks. Often fields of colour invade the canvas, compounded by aggressive scratches, depicting tension between the background and the surface. Hartung commented,

What I love is to act on the canvas. To act? That is to scratch, to tear, to stain, to invade the canvas with colour, in brief everything which is not 'to paint.'

The results are dramatic and timeless. The works displayed in Hans Hartung and Art Informel will bear witness to a time that challenged the very pillars of artistic tradition and laid the foundations of the birth of a new modern age. The exhibition will be accompanied by a fully illustrated catalogue with an essay in English and Italian by Alan Montgomery. 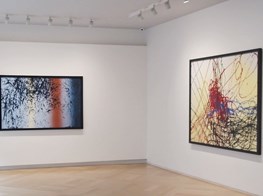 In this video, writer and historian Alan Montgomery discusses Hartung's practice and its legacy.

Be among the first to know when new artworks and exhibitions at Mazzoleni are added to Ocula.
Sign UpLogin