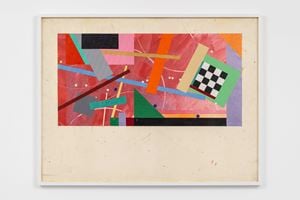 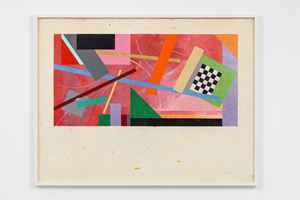 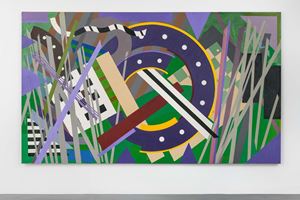 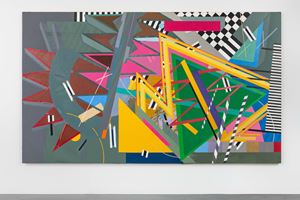 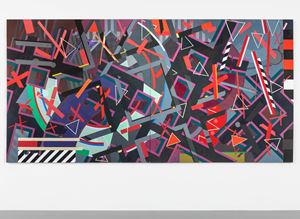 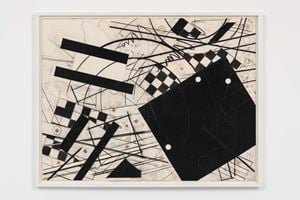 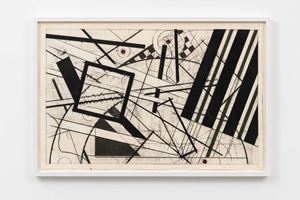 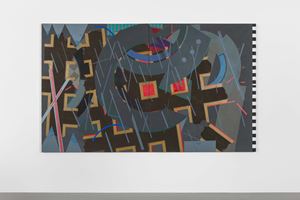 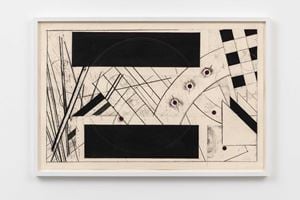 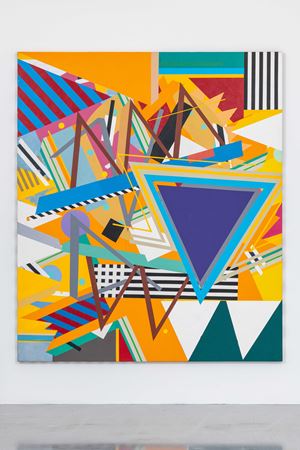 Pilar Corrias is pleased to present the first solo exhibition in London of American artist Robert Reed (1938–2014) focussing on the San Romano Series executed between 1979 and 1984. This body of work consists of ten large paintings that combine colourful abstract forms with a sense of geometric composition and perspective derived from the Italian Renaissance. These works were a direct response to Paolo Ucello's The Battle of San Romano (c. 1438–1440) which Reed saw at the National Gallery in London in 1979. Uccello's mid-fifteenth century masterpiece resonated with the formal questions Reed was engaged with in his abstract compositions. 'The activity, the clash, the pomp, and circumstance...the organised confusion was something that I identify with very much,' he said in 1986. 'I began to develop a vocabulary which became the vocabulary through which I speak now, but it came directly from those paintings.' The exhibition will include five of these monumental paintings alongside charcoal drawings and collages which have never before been shown outside of the United States.

A student of Abstractionist painter and Bauhaus designer Josef Albers, Reed learned to skillfully mix his own colours, often reflecting his personal experiences in vibrant compositions of geometric form. Reed taught at Yale School of Art from 1969 until his death in 2014 and had a profound influence on future generations of emerging artists, including Stanley Whitney, Tala Madani, Rachel Rose and Tschabalala Self. Despite teaching full-time Reed maintained an active studio practice throughout his life producing a body of work that included paintings, collages, prints and constructions.

In 1973, he had a major solo exhibition the Whitney Museum, but following this Reed was rarely exhibited, partly due to constrictive exhibition opportunities for African-American abstract artists in the '70s and '80s. The San Romano paintings were first shown in 1980 at the Silvermine Guild to great critical acclaim, including from The New York Times:

'Full of movement and many bright Aqua-Tec colours, these are good-looking, enormously clever paintings that are dazzling patterns of squares, slats, stripes, checkerboards and arcs, all beautifully balanced against each other. At the same time, they are monologues and full of technical witticisms.'

Elements of these paintings recall early abstractions by William T. Williams, or segments of Alvin Loving's hard-edged polyhedrons. But Reed shreds recognisable geometrical shapes, constructing his compositions out of formal fragments (the studs on a horse's harness, lines echoing lances) put together with an eye for both dissonance and harmony. In the process, subtle references to his own childhood in segregated Charlottesville, Virginia, and personal motifs, such as the checkerboard given to him from his son, make their first appearances.

The titles of Reed's works were often carefully structured. He places each painting within its series, and then tethers it to a nostalgic symbol of his childhood. This titular strategy charges the abstract form of each work with meaning. For example, San Romano, Monticello Brick references Thomas Jefferson's plantation home just outside of Charlottesville which Reed frequently visited. San Romano, Hydraulic Lift recalls the place Hydraulic, Virginia the artist's father's home. Reed wrote about this work in a later essay: 'The ingredients are autobiographical in nature...suspended in a cultural broth of Virginian memories and earth.'

Sign up to be among the first to know when new exhibitions by Robert Reed or at Pilar Corrias open.