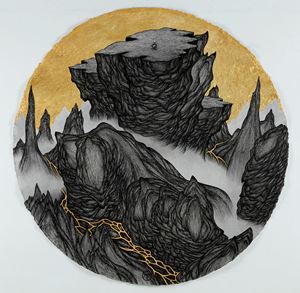 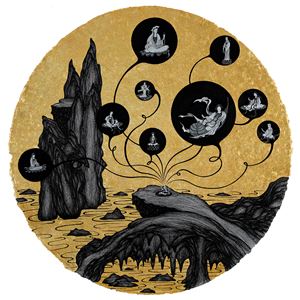 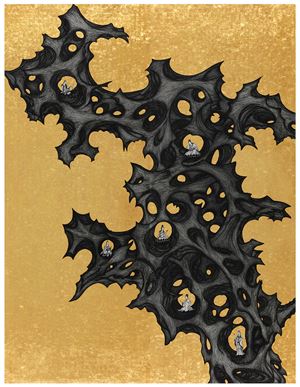 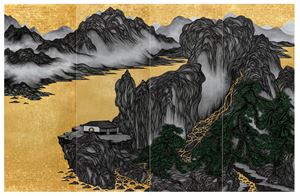 Tina Keng Gallery is pleased to present Vimalā-bhūmi—Yao Jui-chung solo exhibition, where the artist will be presenting his latest series of monumental paintings titled Jinbi Landscape. In the two years that have elapsed since his last solo exhibition, Yao has encountered a series of unexpected events—separations, withdrawals, and departures—in his personal life, and having just celebrated his 50th birthday, he faces the greed, jealousy, and ignorance in the world around him with a renewed perspective. For this series, Yao Jui-chung continues his signature reinterpretations of Buddhist aesthetics, but he sheds a renewed light upon his creations. It is written in the canonical Buddhist scripture Avatamsaka Sutra, in a chapter called 'The Ten Stages,' that one must reach the second stage, Vimalā-bhūmi, or 'Stainless Ground.' Amidst chaos and confusion, one must clear the mind of all distractions; once impure thoughts have been dismissed, one can begin the act of creation with renewed inspiration and pure vision.

During his childhood, Yao Jui-chung often stayed in his grandmother's home in Taichung, next to Leh Cherng Temple. In his spare time, he would wipe the dust off the altar. He has always been fascinated by the extravagant carvings and sculptures inside the temple which, to Yao, indicate that religious devotion is ultimately a demonstration of personal desire. This experience inspired Yao's ongoing interest in contemporary variants of traditional belief aesthetics, and he has since diligently explored various sources of religion. The artist's beliefs deviate from traditional Buddhist doctrine, and they form the core of his artistic philosophy, manifesting throughout his many series via symbols and allegories. Over 10 years ago, with his photographic series 'Beyond Humanity' (1998), Yao Jui-chung began his long-term examination of the landscape of temples and religious relics in Taiwan, including the giant statues of the gods scattered throughout the mountains. He later assembled the photos in his 2017 solo exhibition, Incarnation, a stunning spectacle of which connects the mysteries, desires, and perversions of the world in an era of consumerism following the end of Taiwanese martial law.

To temper his manic phases, Yao Jui-chung began following the 'Heart Sutra' as he created his artworks. After studying the 'Diamond Sutra,' his painting style became more balanced and controlled than ever before. He went on to study several major works of Buddhist literature, such as the 'Dharma Blood Theory,' the 'Perception Theory,' the 'Platform Sutra,' and many other profound philosophical texts. Despite claiming that 'We reach the Golden Summit of the Wudang Mountains and return empty-handed, we listen to Buddhist scriptures but don't hold the Three Treasures, we go to church but are never baptized—not even so much as a fast bath to see Allah,' Yao still senses that there exists a mysterious force which governs and guides sentient beings. The artist has imbued his works with allusions to Buddhist wisdom and other religious philosophies, offering a uniquely altered and subtly rebellious perspective of the world.

Yao created the works in the 'Jinbi Landscape' series according to his 'Six Principles of Painting,' which the artist devised to systematically subvert the authority of traditional Chinese literati ink painting practices. He rejects the use of ink stones, soft bristled brushes, and rice paper, instead opting for modern ink tools (like ballpoint pens) and thick handmade Indian paper. He further transforms what is typically empty white space into brilliant fields of gold leaf. In these monumental scrolls, Yao illustrates a land of pure fantasy which seems to echo the resplendent aesthetics of Buddhist temples in Taiwan, providing access to the 'Golden Field' through illustration.

The mesmerizing glow of the gold leaf remains replete with cultural connotations, even as it has been re-interpreted by Yao. Here, it serves a satirical function. Defying the ordinance of the floating world, the artist's playful rebellion holds great critical power. The secular and spiritual collide in Yao's imagined utopia, and from it, one can detect the impacts of his personal life experiences and his complex devotion to art. To reach Vimalā-bhūmi, is it necessary to leave the earthly realm?

Sign up to be among the first to know when new exhibitions by Yao Jui-chung or at Tina Keng Gallery open.
Sign Up