Tina Kim Gallery is pleased to present Minouk Lim: Mamour, on view November 2, 2017 through January 20, 2018. The exhibition is the artist's first solo presentation in New York and centers around three bodies of work that explore how broadcast TV can surface remembrances of those otherwise marginalized by national and political narratives.

Minouk Lim's work recalls historic losses, ruptures, and repressed traumas. Rooted in language, and specifically the politics of expression, of what has been said and what that, in turn, has silenced, her sculptures, videos, performances, and installations don't replay past events, rather, they elevate the experiences, memories, and feelings of those sidelined by the political violence of the Korean war and its ensuing process of modernization. Curator Soyeon Ahn has written that Lim's work "testifies on behalf of the invisible."1 Indeed, her projects cast that which has gone lost and missing—be this collective memories or deep feelings of longing and grief—into generative, even hopeful, new forms.

The Hole-in-Chest Nation (2014), evolves from Lim's trenchant work with the remains—literally, the bones—of those killed by state-sanctioned violence during the Korean War. Two precursors set the stage for this installation. One is Navigation ID (2016), which opened the 10th Gwangju Biennial, Burning Down the House, in 2014 and consisted of two large-scale shipping containers that viewers could peer into to see rows of dimly lit plastic boxes, each filled with bones sorted according to type (tibiae, vertebrae). The showing of the work 1 Soyeon Ahn essay prompted a belated funeral, a chance to properly mourn those whose bodies had been long out of sight. At the biennial's opening, helicopters would accompany the trailers, and family members in blindfolds wearing white morning clothes proceeded to greet the lost.2 A second precursor is work of artist Eui Jin Chai, who survived apolitical massacre (he was left for dead under the corpses of his brother and cousin). Eui Jin Chai's life work has been spent crafting effigies out of limb-like branches and roots, a process he describes as "a bitter struggle against a life tainted with sorrow, anger, solitude, and curse."3 Lim's series of figurative sculptures The Hole in-Chest Nation responds to Eui Jin Chai's precise wooden effigies with more surreal forms, each designed to be portable and wearable, and used previously in performances. These evoke not only the lives, but also the shared heartache (like a hole in the chest) and yearning that accompanies the deep sutures and divides left in war's wake.

In Running on Empty (2015), an installation composed of seven sculptures, the typical elements of a production crew have been remodeled with organic materials. Feathers, wax, and wood substitute metallic joints, screens, stands, lighting, and sound equipment. Seemingly lost in transition, each sculpture induces a sense of unknowing, uncertainty, and inefficacy as their function has been set aside. In Black Hole (2015), one part of Broadcasting Station, the face of a standing light reflector is shrouded in a dense layer of black feathers. In Green Ray (2015), a boom microphone is reimagined as a patch of fishnet dangling from an erect branch affixed to a motionless dolly. And, in On Air (2015), an illuminated eponymous sign has been placed atop a row of sponges hardened by wax. "Running on Empty" transmutes its political and affective remains into signposts that stand in between an afterimage and its half-life, the material and the imaginary, the finite and the possible.

The Possibility of the Half (2012) is a two-channel video projection that begins with a mirror image of a distraught woman kneeling on the ground. Her sobs and the heaving of her body are magnified by a slow-motion effect. Soon, another woman's face, similarly pain-stricken and decelerated, overtakes the right frame.Both sequences have been appropriated from televised footage of the aftermath of two different events: the death of Kim Jong-il, former supreme leader of North Korea (1941-2011), and the death of Park Chung-hee, former president of South Korea (1917-1979). Lim's tight framing, which cuts out the surrounding context, razes the political divide that underlies the two events and makes common ground out of their anguish. As the video progresses through a visual lexicon of grief, with various mourners shaking, swaying, wailing, and appearing shocked, it interweaves other found images, such as ominous shots of an atomic bomb explosion, the sun rising at an unnaturally fast clip, the ocean tide receding, and a North Korean escalator rising slowly upwards. Lim also layers in footage that she shot on an infrared camera, which is designed to read heat, not light. The camera's ghostly renderings of hands, trees, and the sky suggest another dimension of experience and perception, perhaps one where feeling—devotion, love—eschews present divides, be they technical (the framing of the two-screen projection), national, or ideological. Lim's recasting of the broadcast reportage reveals emotions and voices suppressed by the official rhetoric of mourning.

We say that time heals all wounds. But I feel ashamed and connected at the same time; I see only blurred boundaries and disappeared wounds embodying the surrounding landscape.

Minouk Lim's 'It's A Name I Give Myself' (2018) probes the scars of war via a compilation of video excerpts featuring individuals separated from their families by the Korean War, narrated by a fast-c 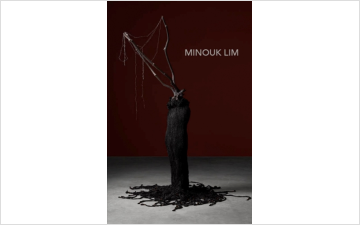 Sign up to be among the first to know when new exhibitions by Minouk Lim or at Tina Kim Gallery open.
Sign Up Login