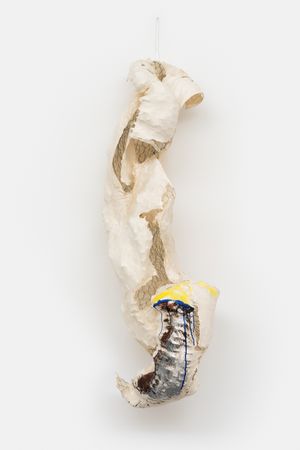 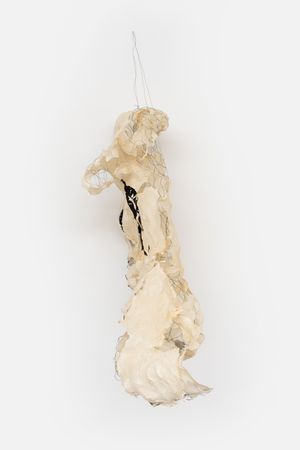 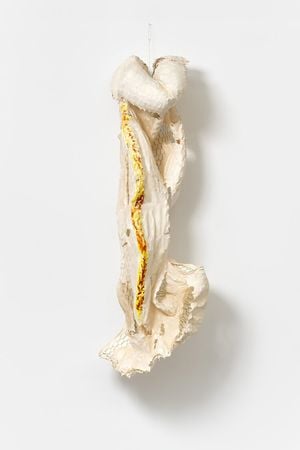 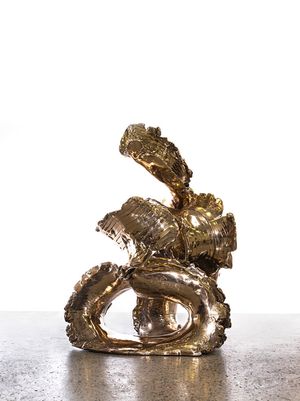 For Nœuds et nus, pioneering American artist Lynda Benglis (b. 1941) returns to Brussels with a group of recent sculptures in paper and bronze.

Featuring a series of wall-mounted paper sculptures in ethereal nude tones and a large-scale, highly polished golden bronze, the exhibition shines a spotlight on the sensuous tactility at the crux of Benglis' practice. Although bronze and paper couldn't be more different, both materials share a similar capacity for physical transformation. Bronze becomes molten and paper softens under the influence of the primal elements of fire and water. This fleeting moment of mutability is what fascinates Benglis in her working process and lies at the heart of the exhibition.

To make her tubular and lightweight paper sculptures, the artist draped wet sheets of handmade paper over chicken wire armatures, which were also fashioned by hand. Their subtle flesh tones and minimal adornment can be interpreted as a reference to the human body, and more specifically, the representational form of the nude. Benglis explains, 'They are like skins basically–that is how I think of them. They describe the form and the skeletal structure that is always kind of in motion. Very mutable, it is kind of like clay, but the clay becomes paper. It dries so beautifully, and the wrinkles are all part of it, and the colour change is part of it, so it is like painting with physical paper. The gestures are in the drying, in the push and pull of the wire, plucking like a guitar.' Childhood memories of the natural world–landscape, trees and water in particular–play a crucial role within the artist's creative practice. A number of works refer to Benglis spending time on the Kastellorizo Island in Greece or birdwatching with her grandfather in Mississippi.

Benglis' sculptures reveal the processes behind their making–the shaping, modelling, pushing, and pulling that brings them to life–and this is no less true of her free-standing bronze work Power Tower. Here, Benglis returns to the knot, a form important to her since the 1970s and one she associates with expansion and growth. Her bronzes derive from earlier small, elemental,hand-formed clay works from her Elephant Necklace series. To describe Benglis' work in 1974, the critic Robert Pincus-Witten famously coined the term 'the frozen gesture,' a concept that merges material temporality with gestural freedom. The Elephant Necklace series is a key example of the frozen gesture's formal volatility, opposing the modernist impulse towards fixity. Once the forms are enlarged in bronze, they no longer seem frozen; their shining surface allowing for an even greater sense of movement. Benglis likens the knotted forms to the blown-out car tyres that litter the sides of motorways; the metal makes them faster and more changeable. In fact, the forms that Benglis chose to enlarge are the ones she considers the fastest of the Elephant Necklace series. The bronze knot becomes a convoluted mirror, reflecting and activating the environment around it.

The true subject of Benglis' evocative and highly expressive forms is the artist's synergetic engagement with her materials. Although both kinds of work are rooted in a similar process–the shaping of soft, organic substances, be it clay and paper, with hands and fingers–they each evoke different kinds of actions, movements and sensations. While Power Tower communicates power and motion, the paper sculptures exude a quiet stillness.

By demonstrating the plasticity and mutability of these materials and the processes through which they are shaped, Benglis makes the act of artistic creation itself visible.