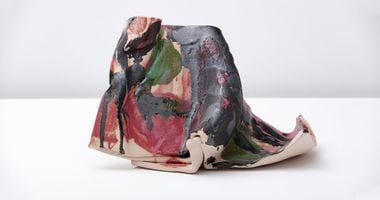 Lynda Benglis is an American artist recognised for her poured latex and foam sculptures that she began making in the late 1960s. In eliminating the canvas, Benglis blurred the boundaries between the two previously separate traditions of painting and sculpture. These oozing, biomorphic forms melt hierarchies and distinctions.

Benglis began by pouring latex and polyurethane foam onto the floor and corners of her studio. Later, she cast these shapes in metals to create a mix of soft and hard physical forms. Benglis' sculptures—a mixture of Abstract Expressionism, process art, transformation, and feminist art—challenged the male-dominated Minimalist movement and trend towards control over painting that pervaded at the time.

In many of her sculptural works, Benglis use pastel colours and craft materials such as glitter and wax to distance herself from the cool colours and 'macho' media used by her contemporaries. One series of works involved Benglis reflecting upon her Greek heritage and producing pieces named after letters of the Greek alphabet. An example of this is Psi (1973)—a glittery, twisted sculptural knot. Another notable series is her pleated metal sculptures, as with the silver and mauve Eridanus (1984).

Though revolutionary in practice, Lynda Benglis' luscious and groundbreaking works went under-recognised in the 1970s New York art scene. In 1974, in response to the male dominance of the art world, Benglis notoriously photographed herself naked—wearing nothing but cat eye sunglasses and holding a dildo against her crotch—and placed the image as an advertisement in Artforum. Though met with much criticism, this famous act did little to elicit response for her work at the time. The artist's willingness to use her own body in photography, however, went down in feminist art history. It also represented an era that saw the likes of Cindy Sherman take self-portraiture to a new level.

Benglis has produced not only sculpture but also video and photographs to explore themes of power, dominance, masculinity, gender relations, and natural forms. An example of this is her video piece, Female Sensibility (1973), made in response to the 1970s belief that a lesbian phase was necessary in the women's movement. In it, Benglis kisses her colleague Marilyn Lenkowsky, leading the viewer to question the role of women and ideas around submission.

In an interview with Ocula Magazine in February 2015, Benglis says of her video work, 'I studied underground filmmaking and I began to think about the difference between video image and film time. . . . I was interested in the idea of investigating moving image in real time, using different contexts.'

Benglis grew up in Louisiana, where she attended McNeese State University. In 1964 she received a BFA in ceramics and painting from Newcomb College in New Orleans. Later she moved to New York, became involved in the art scene there and pursued painting at the Brooklyn Museum Art School.

The curation of this show by Chisenhale Gallery's director Zoé Whitley spells a very promising future ahead for Jones. ⁠⁠

Extraordinary sculptures by legendary Lynda Benglis, Alma Allen, and Jonathan Meese are among our favourite works.

Read More
In Ocula Magazine View All (5) In Ocula Advisory

Julia Stoschek opened her collection of time-based media art to the public ten years ago, and to celebrate the anniversary she has invited the British artist Ed Atkins to curate an exhibition from her

Over the course of her long career, Lynda Benglis has defied easy categorization. From her earliest days in New York, where she moved after graduating from Newcomb College in New Orleans in 1964, her

A new video on the artist's recent sculptural works

Sign up to be notified when new artworks and exhibitions by Lynda Benglis are added to Ocula.
Sign Up Login