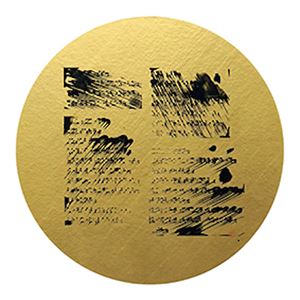 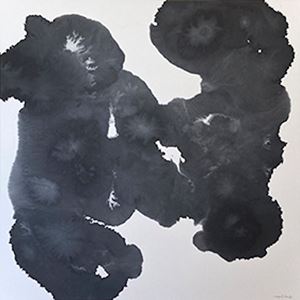 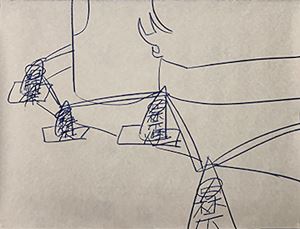 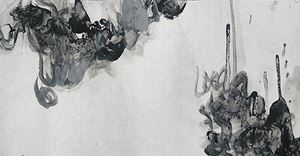 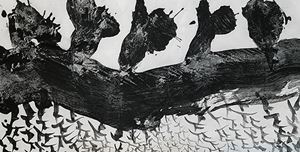 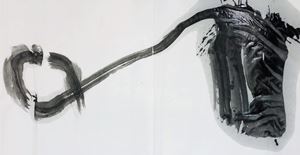 Three years have passed already since the 2017 group exhibition The World of Contemporary Calligraphic Art, and during that time there has been steady but growing interest in us calligraphers, with over a dozen successfully making the leap to commercial galleries in Japan.

Amid this, the question arising time and time again is, exactly why do we contemporary calligraphic artists write text?

The history of modern Western art includes a number of artists who have incorporated written text in their creations. One example would be Jean Michel Basquiat, whose work was presented in Japan last year in a major retrospective. Those clusters of text penned in 1980s New York, amid persistent discrimination against African-Americans, represented a roar of defiance on the artist’s part.

Such use of text to express soul-stirring emotions that demand release has of course been going on for centuries in the world of calligraphy as well. In his Draft of a Requiem to My Nephew, eighth-century Chinese calligrapher Yan Zhenqing, for example, expressed in the unrestrained style of his brushwork deep sorrow at the loss of a close family member in the An Lushan rebellion.

Silent suffering voices confronting discrimination and the chaos of war: both had reasons to write text, reasons that flowed, untrammelled, through their arms and hands to find expression.

Reflecting on those of us in the present, one wonders if we really have serious reasons comparable to these. Yet each of the contemporary calligraphers here is dealing with something in their life; each has come to represent their individual challenges in characters this way, this being what we think of as 'calligraphy.'

Gen Miyamura for example takes Braille as his subject matter, focusing on the beauty that dwells within these letterforms and the building of Braille culture, while Ayako Someya visualises the elemental symbols of all things in creation, and likening their structures to text, throws them into relief in the bleeding peculiar to calligraphy. Mayuka Kobayashi employs thick, luxurious brush strokes to reconstruct Zen thought as art, as if to translate it into modern language, while Kimihiko Hino has used a lighter touch to present a humorous side of the world witnessed from the narrow confines of his daily commute. Doukan Yano mocks the chronic imbalance of hierarchical relationships in the world through misshapen characters, and characters of different sizes, while Haru Yamaguchi thinks of drops of ink as the puniness of humans unable to defy gravity. I, Hisashi Yamamoto, continue my attempts to reinterpret the relationship between objects and text since Saussure linguistics by 'writing the names of things on things.'

Thus our individual 'symbols and now' are definitely here, albeit modestly, unmistakably living and breathing as shodo, the art of calligraphy unique to Japan.

The World of Contemporary Calligraphic Art 2 – “Symbols and the Times”

Sign up to be notified when new artworks and exhibitions at Yumiko Chiba Associates are added to Ocula.