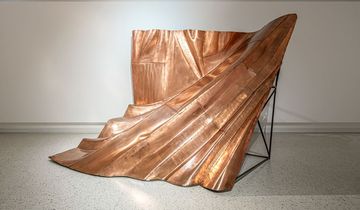 Born in 1975 in Ba Ria, Vo fled Vietnam at the end of the American Vietnam War. His family's journey to Europe in a home-made boat, and serendipitous rescue by a Danish freighter, are reflected in the elements of chance and encounter that occur throughout his practice. Documents, photographs, and found objects are mined for their discrepancies between reality and mythology, undermining assumptions about human relationships and behavioural norms.

Vo frequently collaborates with friends, family, and acquaintances to enable chance in his work. In his solo exhibition untitled at South London Gallery (SLG) in 2019, Vo took over the Main Gallery and Fire Station building of SLG, and presented a site-specific work on Pelican housing estate and Art Block—SLG's art space dedicated to children. The artist's friends, lover, father, and professor were all engaged in this exhibition, along with the residents of Pelican estate, who gained access to American sculptor Isamu Noguchi's bright red Play Sculpture (1975–1976), selected by Vo. Resembling a circular, undulating band with three legs, the work invites participants to rest or play on it—a manifestation of 'freedom of expression, openness and hybridity', as reflected across Vo's own practice. Photographs by Vo's partner, Heinz Peter Knes, of his nephew Gustav; alongside paintings by his former professor, Peter Bonde, are further example of Vo's personal alliances in his work.

Alongside personal references, the exhibition at SLG contained archival elements, bringing the past into the present in his inclusion of marble compositions made up of Antique, Medieval, and 19th-century statues, melded together with brass fittings. In an Ocula Conversation with Diana d'Arenberg in 2016, Vo explains that he feels that 'Modernism detaches itself from broader history' but that he doesn't 'think that should necessarily be the case.' In his installation You're gonna die up there/ Keep away! The sow is mine/ Fuck me, fuck me, fuck me/ Let Jesus fuck you, let Jesus fuck you! Let him fuck you/ Lick me, lick me/ Do you know what she did, your cunting daughter?.... (2016), for instance, the artist combined lines from the film The Exorcist in the work's title with 450 Pleistocene mammoth fossils and a Dutch ivory crucifix from the 17th-century, to reflect on his Catholic upbringing and sexual identity, with the profane language of The Exorcist cited by the artist as having shown him the liberations of freedom of expression.

Archival materials, artefacts, and objects with specific historical connotations are also present throughout the artist's practice as references to colonial legacies and the history of globalisation. For instance, in Vo's installation composed of numerous carmine candles in varying shades of pink, titled Gardens with Pigeons in Flight (2018), the artist collaborated with artisans in Oaxaca in Mexico to bleach candles and dye them in cochineal—a reference to the pre-Hispanic tradition of cochineal dyes and their key role in European trade. The use of candles was also used a reference to Catholic faith, with cochineal having held prominence in the upper hierarchy of the Catholic Church in Europe.

Danh Vo studied at the Royal Academy of Fine Arts, Denmark, and the Städelschule, Frankfurt. Vo was the recipient of the Hugo Boss Prize from the Guggenheim Foundation in New York, and the Arken Art Prize in 2015, and has held numerous solo exhibitions worldwide, at institutions including CAPC Musée d'art contemporain de Bordeaux, Guggenheim Museum, and Statens Museum for Kunst in 2018; National Gallery Singapore and Aspen Museum of Art in 2016; and the Danish Pavilion of the 56th Venice Biennale, Museum Ludwig, and Museo Reina Sofia in Madrid in 2015.

His work has been exhibited at the Fundació Joan Miró, Barcelona; the Museum of Modern Art, New York; the Kunsthalle Fridericianum, Kassel; the Art Institute, Chicago; the Kunsthalle Bregenz; and the Musée d'Art Moderne de la Ville de Paris.

View More Ocula News Five Fantastic Booths at TEFAF New York 2022 New York, 5 May 2022 The fair features more than 90 galleries as it finally returns to New York from 6–10 May. We asked Chantal Crousel, Beck & Eggeling, Galeria Mayoral, Gladstone Gallery, and Axel Vervoordt to share what they're showing and why.

Read More Ocula Feature The Dream of a Museum at Hong Kong's M+ By Nick Yu, Hong Kong At M+ Museum in Hong Kong, artists and curators chart a pathway for visual culture beyond Western centrality.