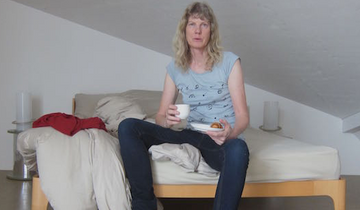 Working with the process of subtraction to create gestural oil and acrylic paintings, Judy Millar investigates the relationships between painting, the body, and the three-dimensional space.

At first glance, the expressive quality of Millar's work is reminiscent of mid-20th century action paintings; indeed, she engages with the canvas on the floor like Jackson Pollock, using her entire body in the process of vigorous mark-making. However, Millar's treatment of paint diverges from the additive gestures of action painters in that she employs rags or squeegees to erase, wipe, or scrape paint off the canvas. For example, the dynamic marks in Sky Drops (2017)—seemingly dancing or swimming against the background of sky blue and pink—are a result of such subtraction. Millar rejects gesture as a means of personal expression, stating in her 2016 conversation with Ocula Magazine that 'my work is much more about drawing; it is about looking and seeing, less about "expressing"'.

Equally interested in scale and a painting's impact on its environment, Millar often digitally enlarges her paintings and turns them into monumental structures. She first adopted this method with Giraffe-Bottle-Gun (2009), a large-scale installation presented at the 53rd Venice Biennale, for which she fitted the interiors of the Neoclassical La Maddalena church with sized-up prints of her paintings made from a billboard printer. Some of the original paintings were framed and hung on the columns alongside the collection of the church, while the reproductions were cut into irregular geometric shapes, attached to wooden constructions, and erected in a labyrinthine formation. The reproduced works had been painted with a colour palette of mainly black, white, and shocking orange and yellow—a stark contrast to the dominantly subdued, white theme of the house of prayer. Immersed in the swirls of imposing scale and forceful colours, the viewer was compelled to move their bodies around the geometric walls to experience Millar's work.

Miliar similarly introduced a sense of vitality to the otherwise static architecture of the South Atrium in Auckland Art Gallery Toi Tāmaki with Rock Drop (installed 2017–2019). The work comprises an enormous sculpture suspended from the ceiling which touches parts of the stairs, the floor and the wall. Made up of many plywood structures that cut into each other like puzzle pieces, the work's surfaces are covered with digital reproductions of Millar's paintings. First painted on small pieces of paper, the original images were twisted, photographed, and blown up on a computer. There are two patterns on the sculpture: it appears colourful and lively when viewed from the top of the stairs, the replicated paintings folding and unfolding in an invisible wind; from the bottom, there are no flowing ribbons but black-and-white halftone texture that references the artist's love for comic books. Both the physical sculpture and its two-dimensional imageries morph from different perspectives, entering the surrounding space into a shifting dialogue with the viewer's body.

Millar graduated with a BFA and MFA from Elam School of Fine Arts, Auckland, in 1980 and 1983, respectively. In 1991, she undertook a postgraduate program at the Accademia Albertina in Turin, Italy, to research the work of Italian artists from the 1960s and '70s. She has been living and working between Auckland and Berlin since moving to Germany in 2005.

Selected exhibitions include Unpainting—Contemporary Abstraction, an international group exhibition of abstract art at the Art Gallery of New South Wales, Sydney (2017); What: Turning the World Inside Out: 30 Years a Painter, a major retrospective of her oeuvre at Gow Langsford Gallery, Auckland (2016); and Time, Space, Existence, the Collateral Event of the 54th Venice Biennale (2011). Millar was the Wallace Art Award Paramount Winner in 2002 and a McCahon House Artist in Residence between 2006 and 2007.

With Auckland Art Fair taking place at The Cloud on Queens Wharf during the first week of May, Sherry Paik introduces a selection of exhibitions to see around the city.

My work is much more about drawing; it is about looking and seeing, less about 'expressing'. I'm using gesture only in the sense that a gesture can communicate something.

Having just had the Guardian list her latest UK show at Fold Gallery as one of the top five in London, Judy Millar is undoubtedly one of New Zealand's most successful international painters. Her work

'Gesture' and 'gestural' are vastly overused words in talking about abstract painting but remain unavoidable in talking about Judy Millar's work. As Kundera intimates above, perhaps gestures perform u

It's frustrating to her, Judy Millar tells me from the West Coast of Auckland as we discuss her exhibition in Zurich, Swallowed in Space, that people are so rarely asking 'what does painting do to us?

New Zealand's official platform at the Venice Biennale began in 2001, and our formal representation was arguably already overdue at this point. There had been anomalous instances of New Zealanders exh